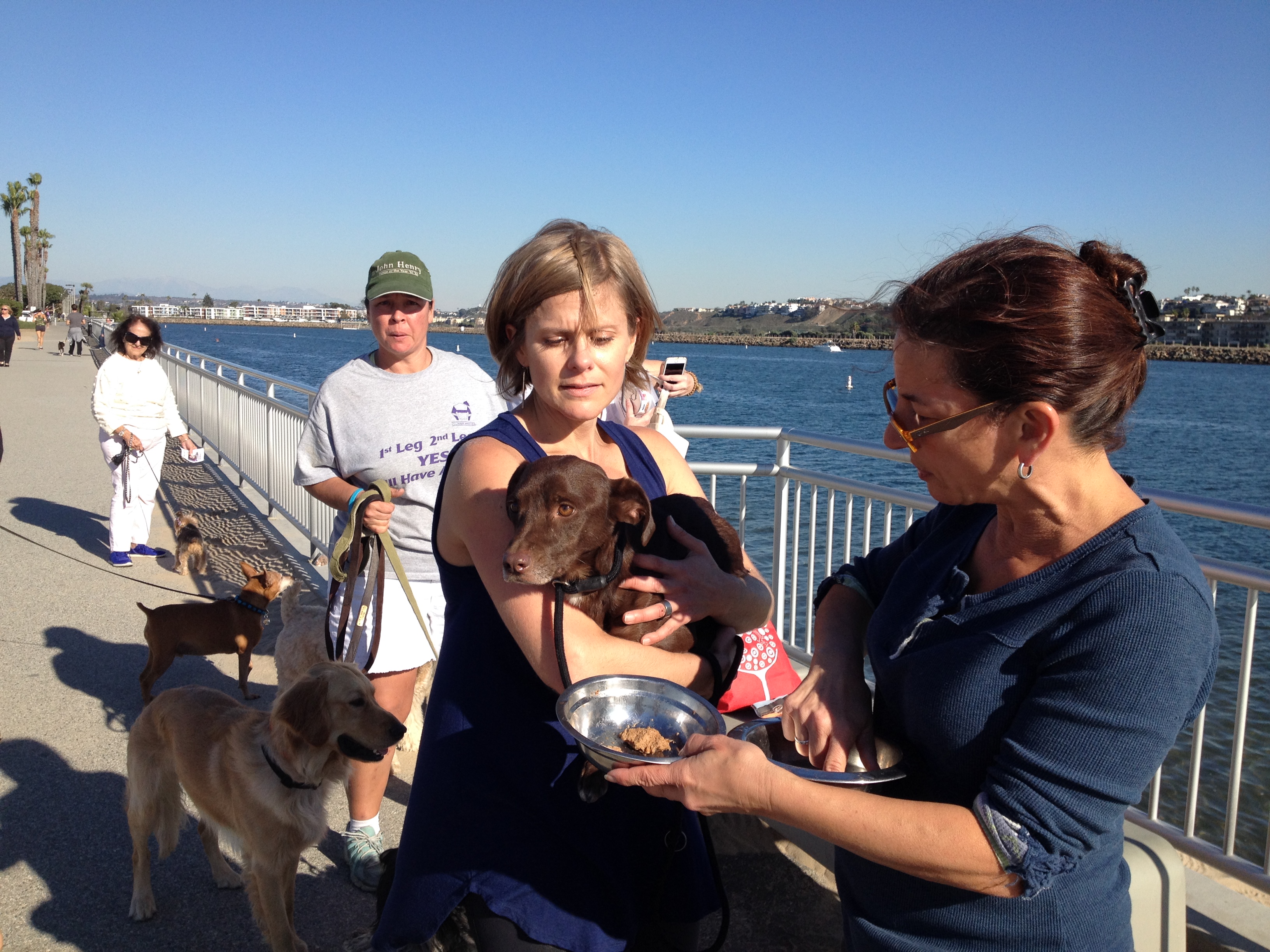 It’s a common sight along Ocean Front Walk: homemade signs plastered on the trunks of palm trees, gaffer taped to light poles. Every sign tells a sad tale of a missing pet. There’s been dogs, cats, and birds. Four years ago a local posted a $5,000 reward for his missing turtle.

Recently the common black and white posters have made way to bright neon signs and armies of volunteers who pound the streets, canvassing locals and local businesses, handing out flyers, and rallying the troops to help find a missing pooch.

Lucy, the missing blue pit-bull, made the news after weeks of campaigning saw her return safely to her distraught parents. More recently Buster Brown, a 20-pound labrador chihuahua cross, was returned to his mom, Marina Peninsula resident Kristy Turner; he was hungry but safe.

Buster had only been living with Turner for a month. A rescue dog, he came from a hoarder and had had no socialization with other dogs or humans, “he was very nervous around people and loud noises,” says Turner.

It was while walking one evening that Buster got away. A trainer had recommended a different collar for Buster. When Turner was trying it out he became spooked and slipped out of the collar at Mast Street and Pacific Avenue. Because he was such a nervous dog Buster, for four weeks, remained at large, with the occasional sighting here around the Peninsula and near Grand Canal.

All the while Turner never gave up hope that Buster would return saying, “when I adopted him I made a promise I’d provide for him and care for him. I knew if I stopped searching I wouldn’t be able to forgive myself. Because of his background I felt terrible that he was missing and having to fend for himself.”

Turner enlisted help from professional pet finder Sarah Sypniewski of Ninja Dog Concepts, along with several locals who all volunteered their spare time to hunt for the missing Buster.

“It takes dedication but also, it takes a group of people,” says Turner.

This is something Finn Egan and Antje Hinz could attest to. The parents to missing dog Lucy took time off work and welcomed an army of volunteers who offered to help search for the missing pit bull.

“If it wasn’t such a sad experience for us it actually would be beautiful just because of the amount of support we’ve received. From friends, friends of friends, and strangers,” Hinz said at the time of the search.

Turner says she would not have found Buster if not for so many people getting involved in the search. Sypniewski was integral to the success of Buster’s homecoming.

Sypniewski is a Los Angeles-based lost pet logistics and search specialist. Her business, Ninja Dog Concepts, is all about returning lost pets to frantic owners. Since 2011 she has helped find more than 100 dogs directly and countless others remotely.

An animal rescuer, with five dogs of her own, Sypniewski holds a B.A. in psychology, has marketing experience, and seven years of logistical and operations experience. All skills that she uses to help track down lost pets.

“In each missing pet’s photo, I see my own dogs’ eyes, and I work around the clock to find them as if they were my own,” she says.

Turner says Sypniewski, amongst other things, helped guide her in making signs that stand out, advised her to go around to local businesses, and helped her put out a pet amber alert on lostmydoggie.com, through which 500 neighbors were alerted of Buster’s missing status.

Another of Sypniewski’s tips was to hand out flyers to people around the neighborhood. It was one of these flyers that ultimately saved Buster when a local woman Taylor Alexis discovered a sacred and emaciated Buster in the rocks of the north channel jetty at the south end of the Marina Peninsula.

Alexis reported Buster to a nearby lifeguard who recognized him from a flyer and called Turner. While waiting for Turner to arrive the timid Buster disappeared from those watching him, crawling into the rocks.

“No one could see him from the beach side but a kayaker paddling by spotted him from the water and waited, watching him until I arrived,” says Turner.

The kayaker left before Turner was able to say thank you.

“She was key in Buster’s recovery, and we’d like to thank her.”

Turner hopes the kayaker might read this and come forward.

As traumatic as the month of searching was for Turner she believes, “it happened for a reason. Since Buster’s been home he has a whole new confidence and strength he didn’t have before. Plus it warmed our hearts to see how many good people are out there.”

Turner says finding Buster has been proof that hard work and persistence pays off, saying it is “such a good reminder that you can do it, you can achieve it.”