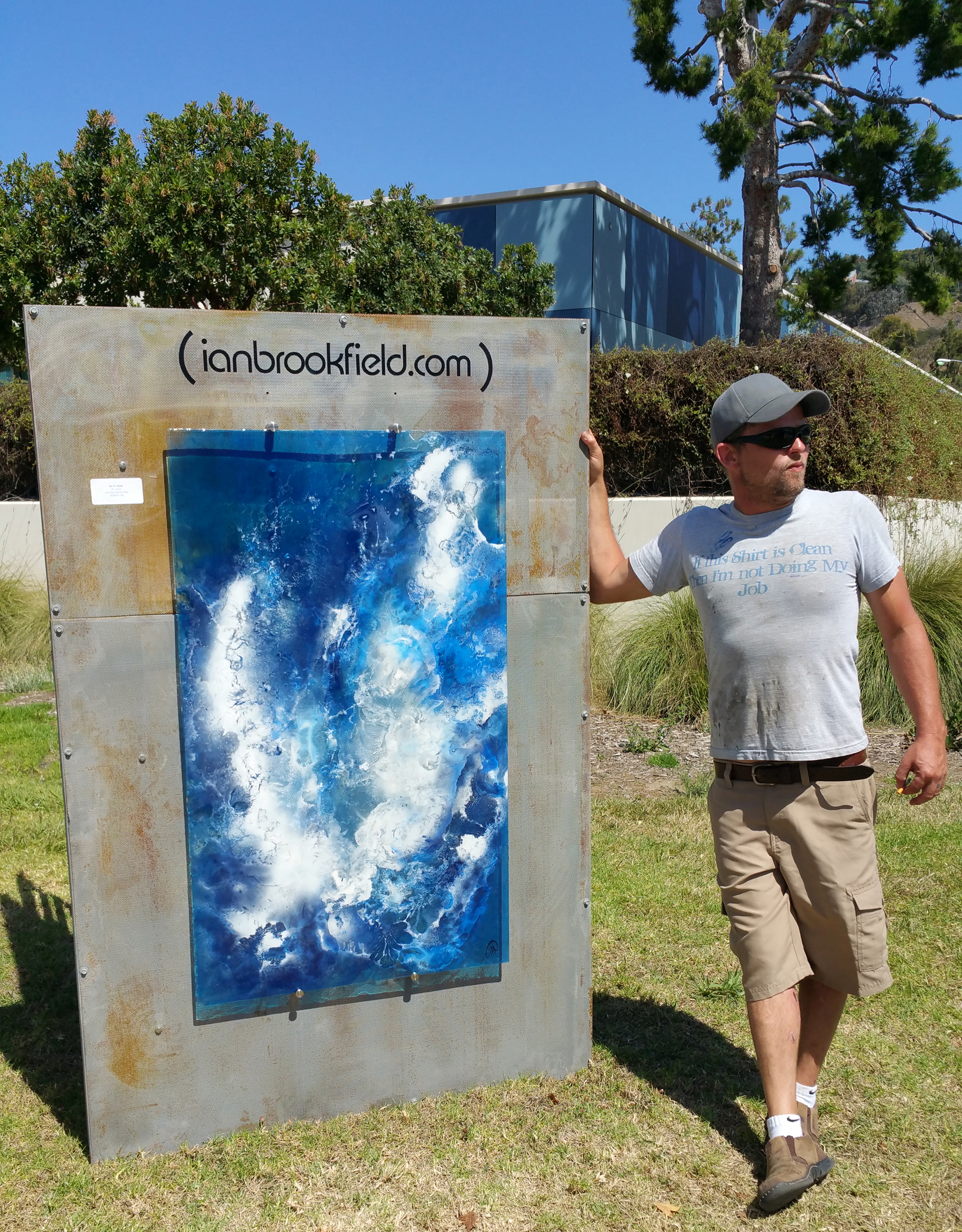 When one looks at the paintings with this article, they may think they’re staring into their own subconscious, or a supernova. However, it isn’t their own mind they’re staring into, it’s merely the works of Venice artist Ian Brookfield, and these works are just the tip of the Ian iceberg.

Brookfield graduated Syracuse in 1998 with a degree in industrial engineering, before migrating to Los Angeles the next year, in 1999, to become a graphic designer.

However, he grew tired of the nine to five hustle and bustle of regular employment, and decided to go freelance.

After saving enough money, he switched from graphic design and computer art, to real, tangible art. He works not only with resin and paint, as seen in his series called “Earthscapes,” but with eight other distinct styles. However, much like a video game where the nine keys must be united to form the ultimate power, Brookfield has only managed to find mainstream success with his “Scorched Earth” series before the current “Earthscapes.”

Much like alchemy, he believes that anything can be used to become something else, eventually working to produce gold, so to speak.

“I use things like driftwood, used computer parts, anything that has been discarded. I also do it to save money,” he joked on the matter.

However, his works of art aren’t haphazard. Much like Jackson Pollock, an artist whose works looked to be random, but were in fact deliberate, Brookfield’s seemingly chaotic paintings were in fact intended as such.

For example, “Earthscapes” show what looks like the sky, or lava, as seen above, and this was very much intended by Brookfield.

“(“Earthscapes”) shows locations either really close or really far away,” he said. “You’re either seeing an expansive sky, or a really close look at algae. It helps put everything in perspective.”

Although his earth pieces (both “Scorched” and the “Scapes”) spread mostly by word of mouth, he hopes that his other styles get success so he can experiment more with other works of art.

However, he continues to work with resin and paint so as to make a living.

“The hardest thing for an artist is keeping up with all of it,” he said. “You don’t want to sell out, but you have to eat at some point. Enjoy what you’re doing, then sell it once you’re satisfied. If you second guess yourself, it’s not worth it.”

He even got accepted to the Beverly Hills Art Show on Oct. 15 of this year with a booth set up on a populated corner of Santa Monica Boulevard. He attributes his prime location for the show on his booth, which he created himself with his engineering background, allowing him to stand out from the competition, whom are simply renting the standard canvas booths.

Brookfield considers himself successful, as would most others who look at his life.

He has made a living from his craft, to the point of being able to hire an assistant, taking the “starving” out of “starving artist.”

However, he still aims to improve himself more in the future.

“I’ll know I’ve made it when I’ll be able to travel, experiencing other people’s art, and sharing my own,” he said. “But you don’t want to rush it, your mind can get ahead of you by a month, a year, five years in advance. Just take it slow, your mind is already there.” He also aims to get his pilot’s license someday.

More information on Ian Brookfield can be found on his website, ianbrookfield.com. For information on the upcoming Beverly Hills Art Show where his works will be exhibited, visit beverlyhills.org/artshow.