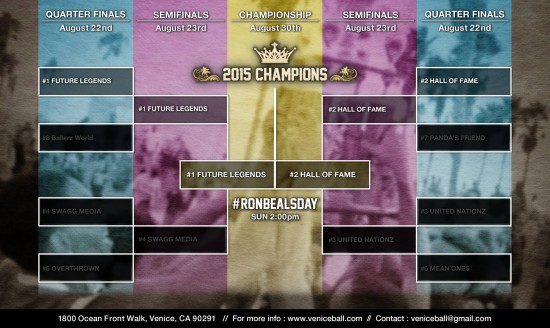 After a two day beach take over, the VBL Finals matchup has been set for this Sunday, Aug. 30 at 1800 Ocean Front Walk.

The undefeated number one seed Brand Black Future Legends found themselves down to number four Swagg Media in the 4th quarter of their Semifinal game on Aug. 23.

With Chris Lawrence aka No Fear having an MVP type season and a rejuvenated Swagg roster welcoming back DJ Shumpert, Brandon Towns aka The Neighborhood Crook, and Brandon Nevens aka Man Child (also earning himself a new nickname “Bullet Proof”), the men in pink were able to put together 3.5 quarters of championship caliber play.

However, like most games, Brand Black’s depth is too much for their opponents to overcome.

Coach Stapleton and Murray huddled their team and came out ready to lock down on D. They took Swagg out of their up n down transition game and followed their 2x MVP T-Will aka King Hustle to yet another team win putting them back in the VBL Finals to defend their 2014 championship.

In the second semifinal, number two Hall of Fame faced number three United Nationz to determine who would take on Brand Black in the chip.

The Hall of Fame squad went up early and never looked back.  They were led by their All-Star back court AJ Harris aka Chosen 1 and Jarrell Tate aka BAMA!

United Nationz put together arguably the most entertaining team VBL has ever seen in its nine years at the beach (including Chris Staples, Adom Jacko, Ian Francis, Corey Law, Zig Zag, Kenny Fab Wright & the CEO Organicko himself), but Hall of Fame’s experience and team chemistry seemed to be too much to handle.  What does all of this mean??

The 2014 VBL Champions Brand Black Future Legends (over Hall of Fame) will defend their title!