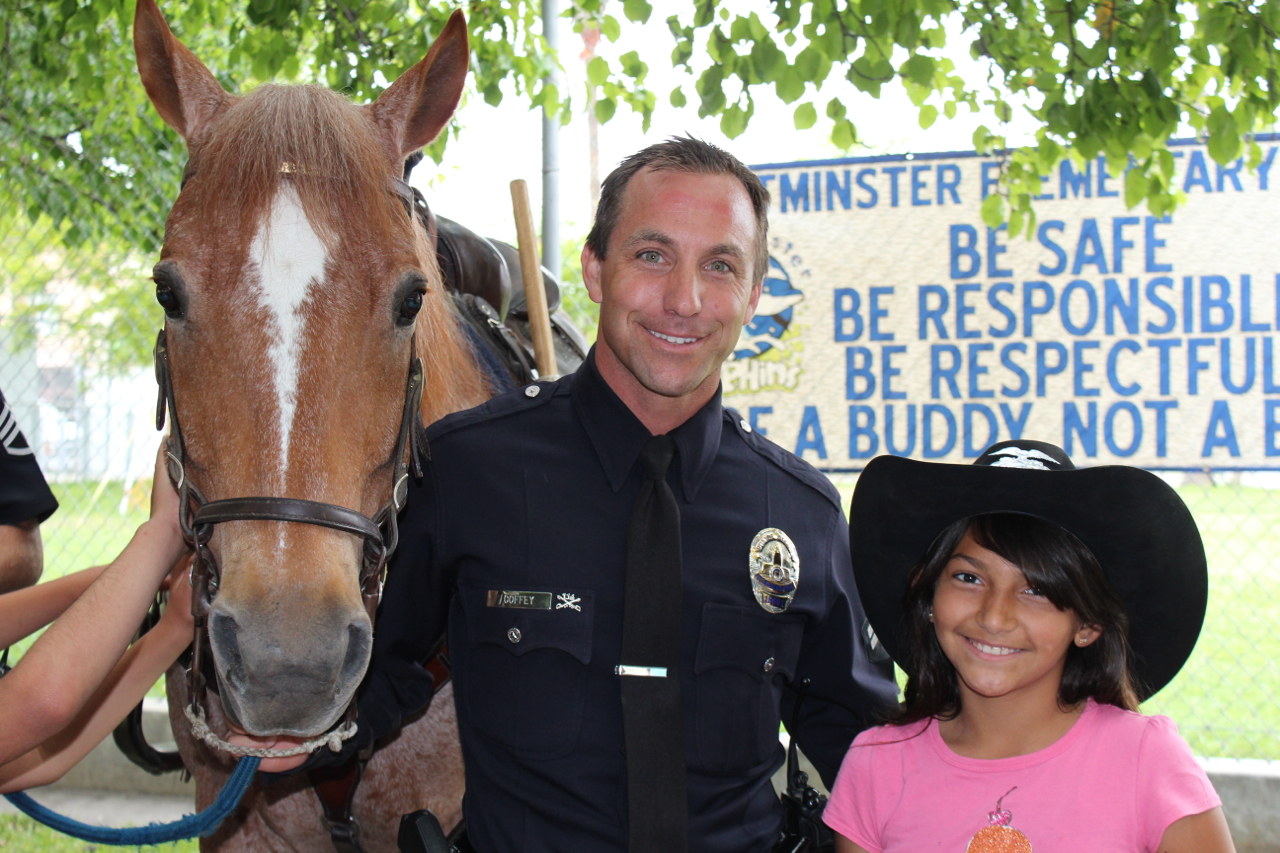 You can hear their hooves echo down Speedway on a busy day in Venice; it is a rhythmic clop-de-clop announcing to all that the LAPD Mounted Unit is out in force.

“Venice is a very unique place, you see a lot of different things and we add to that bringing the horses to a beach environment, so as weird as everyone thinks Venice is, the weirdness of bringing horses to Venice just adds to what a great place it is,” says LAPD officer Eric Coffey.

Coffey was joined by Sergeant Brian Heaney, Officer Thomas Willers, and two LAPD horses on June 4 – the last day of school at Westminster Elementary on Abbot Kinney Blvd., and the kids flocked to the school’s outdoor cafeteria for a special treat.
The crowd squeals as Coffey demonstrates how the horses are trained to not be afraid of walking right up to a person, even pushing into them if they have to.

He wows the crowd with tips on basic horsemanship and police work, even explaining that when the Mounted Unit arrests someone they do not throw them up over the back of the horse but call a patrol car to pick the person up.

“If we threw people over the back of the horse people would want to get arrested,” he says.

After the talk the kids line up for a chance to pet the horses, excitement taking over, the line is broken and a mob soon crowds around the animals.

Coffey explains that school visits like this are actually great for training.

“The horse realizes that with all this noise and all of the crowd that he’s getting pet on, and it’s actually a good thing,” he says. “It’s good for them to see little kids up close to them petting them.”

School principal Barry Cohen says there are many positives for interaction between the students and local police.

“The Mounted Unit are such a big part of the Venice community, it’s important for the kids to see them as friends, someone they can go to when they’re in trouble, when they’re in need, so I think it’s really important that they connect with our students,” Cohen says.

Coffey says the Mounted Unit receives plenty of attention when they are out on the job.

However, school visits and community outreach are just one aspect of the work done by the LAPD Mounted Unit.

“We’re assigned to the Metropolitan Division, which is a city wide unit so we go wherever we are told to go in regards to spikes in crime,” Coffey says. “Any spike in crime that happens in this city is mapped out and they send us in that direction. So right now, and for the past month or so, we’ve been assigned to Venice for a little while with Pacific Division.”

Sergeant Heaney says it does show that there is a reduction in crime when they’re deployed to an area.

“We’re like a workforce multiplier, we can come in and assist with a problem area whether it’s a vagrancy issue, vandalism, or a rise in aggravated assaults,” Heaney says. “We can identify those kinds of problems and assist a division by making the proper arrests and help clean up some of those problems. We give Pacific Division the support they need to help make sure that the community feels a lot more safer.”

Coffey says the Mounted Unit is one of the highest producing units in all of LAPD.

“We go out there and get up and down off these horses may be 20-30 times a day, getting down, arresting people all day long,” Coffey says. “Being so high up we see things at a different level. When we turn a corner we can see all the way down the street whereas a police car is down a lot lower. Police cars can get to somewhere faster than we can but we turn corners and we’re able to look down the street. The reason we’re in Venice Beach right now, it’s a place where lots of visitors go and there’s thousands and thousands of people. We can literally go right through a crowd and see a fight happening or see a person doing something they shouldn’t be on the complete other side of all those people. You name it, we’ve chased people on bikes, we’ve chased people down the beach, and down the sand for fighting with lifeguards.”

Two years ago, Coffey says the Mounted Unit were at the scene when Nathan Louis Campbell drove his car onto the crowded Venice boardwalk, striking pedestrians and killing an Italian woman on her honeymoon.

“We were right there in the action with horses, jumping down and calling for ambulances,” Coffey says. “There were people everywhere. The horses are able to move a crowd whether that be a good thing or a bad thing, whether people are just trying to help but police officers and the Fire Department need the room to get in and out and do things.”

Darrell Preston, Operations Manager at The Venice Whaler on Washington Blvd., says that everyone in Washington Square has noticed a reduction in crime with the increased presence of the Mounted Unit.

“Eric (Coffey) and his crew are a big asset, their presence reduces crime, we’ve seen it,” Preston says. “Overall all the business owners in Washington Square have needed to make less calls to LAPD. Their presence here is a calming thing.”