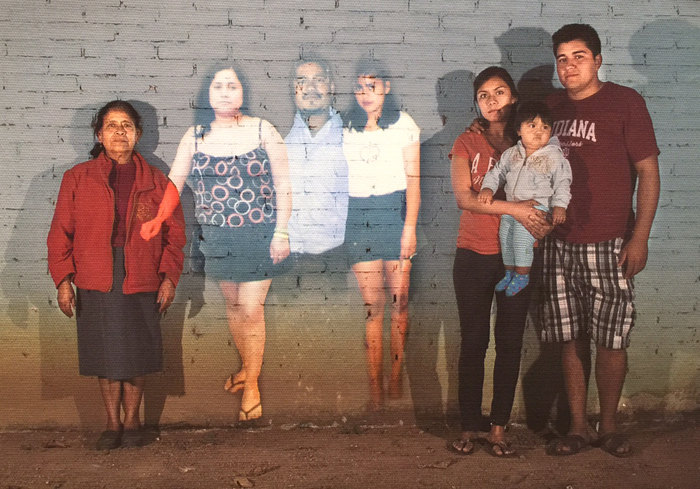 It’s approaching 2 am. Juana Martinez’s flight from Mexico arrived at LAX hours ago. Her crisp new passport is in the hands of a doubtful homeland security agent. One can’t blame her skepticism. She knows the tell tale signs of a fake passport. Martinez has never traveled to the United States, her passport issued only two days prior contains nothing but stiff new pages and a freshly printed visa.

A visa she has earned through her work as an artist. Her visa grants her 20 days in the United States and she comes here as one of 19 featured artists in SPARC’s latest exhibition “New Codex: Oaxaca – Immigration and Cultural Memory.”

Waiting, anxious, on the other side in the LAX arrivals area is Martinez’s son. For him this is like that last, almost unbearable moment, just before you break the water’s surface as you swim up for air. He has not seen his mother in a decade.

“We were very poor, there was nothing and I was the man of the family so there was no choice. I had to go,” he said.

Like so many before him and since, Martinez’s son made the treacherous border crossing. He was only 13 years old.

“There was no water or food and we were in the desert for five days,” he said. “I was so scared. I thought I was going to die; I was so thirsty. I would ask for water and the people bringing us across told me to be quiet. They threatened to leave me in the desert. One man died. I still have nightmares about it.”

With more than one million Oaxacans having immigrated to the United States, the exhibit looks at the impact of immigration on those left behind: those who are often unable to see loved ones, husbands, mothers, and children for many years.

The opening night of SPARC’s latest exhibit was charged with emotion.

Martinez spoke about her art, works inspired by years spent mourning the loss of her son and the hardships faced in her town, San Francisco Tanivet in Oaxaca.

As she speaks her son breaks through the crowd and, tears streaming down his face, throws himself into his mother’s arms. There is not one dry eye in SPARC’s Durón Gallery.

He begins to tear up again as he squeezes his mother close trying to close the gap on the missing years.

“It’s not just the struggle of crossing the border but what you leave behind and what you create on this side,” Bernstorff said. “What you leave behind is a culture, a home, children at a certain age, a wife or parent, and you expect them to be exactly the same when you return each time. If you return. Or if you wait 10 years, I mean, just imagine what that’s like. So psychologically a lot of these women had emotional issues and were not dealing with it well. They’re poor and, you know, they’re not going to therapy about it.”

The exhibit had its beginnings five years ago when Bernstorff traveled to Tanivet in Oaxaca.

She found a village in mourning.

“I met these women who don’t vote, who were at home all the time, and who’s children had a very limited education,” Bernstorff said. “They had no crafts and they had no understanding of the arts. For five years we taught them how to embroider, which we thought was a handy thing and that at least they’d end up with a skill of some sort. We showed them how to use color, concepts, techniques, and tell stories, personal stories as women. What’s your life like? What are you doing today? The farm the animals were obvious because that’s what they do, but then I asked, ‘What’s this other part about immigration that’s really difficult?’ and they began to tell their story about immigration. The loss of a husband, the loss of a child towards immigration. To talk to them on the phone but know you might never, ever, ever see them again.”

Bernstorff said the exhibit in itself is about immigration and cultural memory.

“We’re all immigrants, all of us come from somewhere else and cultural memory is something everybody should maintain in their brain,” she said. “To be just like everyone else sometimes isn’t the best thing.”

Now that five years have gone by, Bernstorff said these women are extremely creative.

“They’re very good at what they do, they have a talent, and people are wanting them in different shows,” Bernstorff said.

Debra J.T. Padilla is the Executive Director at SPARC. She said exhibit is “totally in line with the 40 year mission of SPARC. Which is to be a voice for the voiceless.”