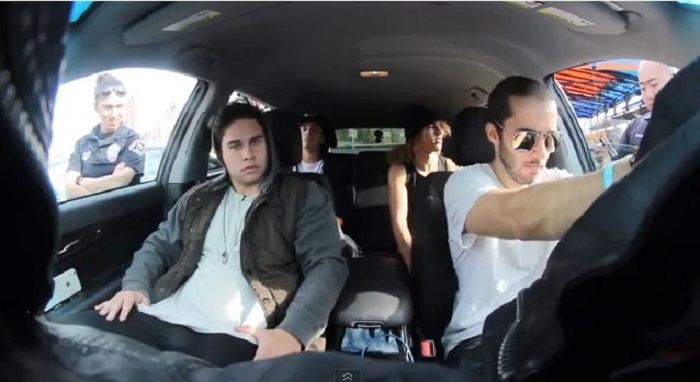 Two officers from the LAPD’s Pacific Division were pranked near the Venice boardwalk by four young men in a car who made the officers believe they had cocaine in their trunk – when it was really just loose cans of Coca Cola – and it was all caught on camera.

It is unclear when the video was shot, but the four men loaded their SUV near Pacific and Windward (a stone’s throw away from the Venice Sign) with cans of Coca Cola and then asked passersby if they wanted any coke in a clearly suspicious manner.

This eventually caught the attention of two LAPD officers who questioned the four while they were sitting in their SUV — while secretly filming the whole thing — before one of the men in the back seat blurted out in a nervous voice, “We have a bunch of coke in the back — I’m sorry.”

One by one the four young men were handcuffed and made to stand by the LAPD vehicle. It was only then when the officers finally searched the trunk of the SUV they realized they had been pranked.

The men were the uncuffed and released, but the video hasn’t pleased authorities.

According to reports, LAPD Commander Andrew Smith decried the misuse of city resources, saying the prank could have diverted the officers from dealing with more serious, life-or-death situations. He added that cops could still recommend charges against the four.