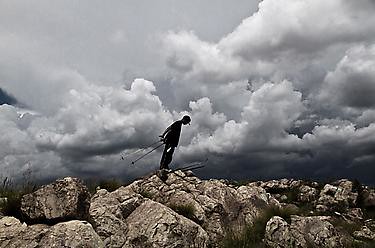 The South African-born and Berlin-based artist has engaged international audiences with a body of work that blends fine art, street culture and performance. Rhode’s work meditates on the playful, explores the imaginary and references mythologies. His work spans a variety of media that includes photography, animation and sculpture. Often the stop motion activities combine physical and drawn elements and are executed as suites of photographs, ranging anywhere from three 3 to 36 individual pieces, creating composed narratives.

Rhode’s photography captures moments that seem limited only to our mind’s eye. His ideas embrace a casual, urban aura, combined with a formal elegance. In the single image Slalom, a man prepares for downhill activity on a snowless slope without hesitation, beyond obstacles, into a world of possibility.

This imaginary world continues in his photographic suite School of Fish, where Rhode poses his protagonist with a fishing rod against a painted wall. Repetitive triangular shapes are drawn on the wall graffiti style. The triangles echo the movements of a school of fish, which become the protagonist’s unexpected bounty. The work conjures aspects of imagination, looking beyond the depths of a given surface, and of desire. This piece also illustrates Rhode’s engagement with oceanic mythology, an additional element brought into this new body of work due to the gallery’s seaside location.

Some works are more specific to a particular experience. Untitled/Houses + Seas juxtaposes images of seascapes with homes in the Lower Ninth Ward in New Orleans destroyed by Hurricane Katrina. The images of the abandoned homes have been printed on black aluminum and crumpled, echoing the rippling waves of the seascapes above. This elegant series recalls the pure beauty of nature and the vulnerability of the human experience in the face of it.

In Yard, the artist plays with the traditional reading of an object. A yardstick is positioned like the hands of a clock, punctuated by the shoes commonly worn by South African youth, often in the school “yard.” Yardsticks, usually used to measure space, are now used to measure time. The series of images are then installed to mimic a clock face.

Rhode’s sculpture also exudes a light-hearted and clever approach. In Sea Bells, twelve oversized seashells have been cast in bronze and mounted atop music stands, transforming them into percussion instruments. The result is meditative, potentially interactive, elegant and absurd. This duality can also be seen in Untitled/Moon Stamp + Ink Pad, where an actual inkpad has been enlarged to surreal proportions, and the stamp, with the image of the moon, is imprinted on the gallery wall.

The success of Rhode’s work lies in its ability to engage the viewer on many levels. Rhode makes very serious art that doesn’t take itself too seriously- elegant and thoughtful with just the right touch of humor.

Robin Rhode was born in Cape Town, South Africa in 1976. In 1998, he received his National Diploma in Fine Art from Witwatersrand Technikon in Johannesburg, South Africa. He has had solo exhibitions at White Cube, London, England in 2011; Los Angeles County Museum of Art in 2010; the Wexner Center for the Arts, Columbus, Ohio in 2009; Hayward Gallery, London, England in 2008; Haus der Kunst, Munich, Germany and Perry Rubenstein Gallery in New York in 2007. He has participated in group exhibitions including the 2011 show 21st Century: Art in the First Decade at the Queensland Art Gallery, Gallery of Modern Art in Brisbane, Australia; Staging Action: Performance in Photography since 1960 at the Museum of Modern Art in New York; The Original Copy at Kunsthaus Zürich, Switzerland; The Dissolve, SITE Santa Fe 8th International Biennial in Santa Fe, New Mexico; The Original Copy at the Museum of Modern Art in New York; Street and Studio: From Basquiat to Seripop at the Kunsthalle Wien in Vienna, Austria in 2010; Dada South at South African National Gallery in Cape Town, South Africa and 30 Second off an Inch at the Studio Museum in Harlem, New York in 2009.