The Venice Neighborhood Council will be hosting a town hall to discuss “Silicon Beach – Gain or Pain“. Santa Monica discussed the same at their “State of the City” last month which can be read about here and here and watched in the video below. 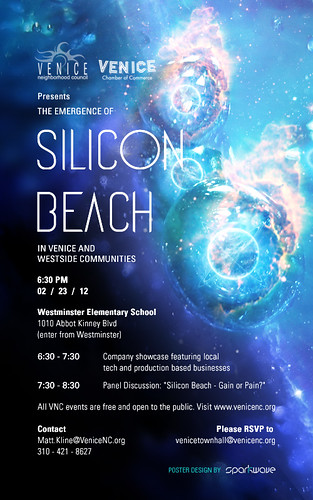 Kudos to SparkWave for bringing the VNC into the 20th century with this flier!

From the Venice Neighborhood Council:

The Emergence of Silicon Beach in Venice and Westside Communities

The Venice Neighborhood Council in partnership with the Venice Chamber of Commerce will hold a town hall meeting on Thursday, February 23, 2012 to consider the impacts of “Silicon Beach” and other production-based businesses locating in Venice and Westside communities.

Stakeholders will meet representatives from local tech, media, and entertainment businesses at a “company showcase” during the first hour of the event, followed by a panel discussion entitled “Silicon Beach: Gain or Pain?”

Venice is becoming a major player in the evolving Los Angeles tech and media business scene and received a major boost when Google moved into the iconic “Binocular Building” and adjacent properties this fall. Google is just the most recent company to locate in Venice.

That’s great for local business owners and job seekers – but it may not be so great for current residents without the skills to compete for those jobs and earn higher salaries. Some find themselves priced out of the local housing market – in other words, what Venice gains in terms of economic benefits could be offset by reduced diversity amongst our residents, changing the face of Venice.

Will increased parking requirements add more to our already congested traffic? What are some of the economic, demographic, social and cultural impacts of the growing tech sector on our community? How should we respond to these potential impacts? Participants will consider these and other questions in an interactive way.

The event will be held in the Auditorium of Westminster Elementary School, 1010 Abbot Kinney Blvd (enter from Westminster) starting at 6:30pm.

All Venice Neighborhood Council events are free and open to the public. Contact Matt.Kline@VeniceNC.org or call 310-421-8627 with questions. www.Venicenc.org . RSVP for event at Venicetownhall@venicenc.org