On Tuesday, January 24th from 6-8pm, the L.A. Louver Gallery will host an opening reception for “Kienholz before LACMA: Works from 1957 – 1964″ in collaboration with Maurice Tuchman. 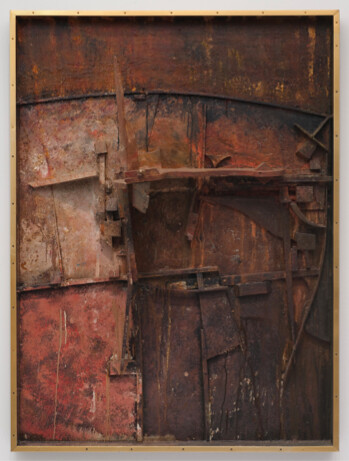 L.A. Louver is proud to present Kienholz Before LACMA, an exhibition of rarely seen works by Edward Kienholz (1927-1994), which he created in the decade prior to his controversial 1966 exhibition at the Los Angeles Country Museum of Art.

We thank Maurice Tuchman, Senior Curator Emeritus of the 20th Century Art Department, LACMA, for his collaboration with this exhibition and for his contribution to the accompanying publication.

“In these works from 1957-1964, we can see how Ed evolves from making work in two dimensions, to three; from abstraction to figuration; from the use of language stanzas as in poetry, to narrative storytelling as in journalistic prose… This exhibition sets out to explore the formal development of Ed Kienholz’s work in the studio through this carefully selected group of paintings, constructions and sculpture. The ‘primordial sources’ of Kienholz’s making are all here: the painting gesture and the employment of resin, found objects, taxidermy, light, and figuration…”

Since his teenage years, Kienholz had painted in oil and watercolor. However, in 1954, at age 27, Kienholz began making reliefs, incorporating wood fragments onto panels, and aggressively applying paint with a broom. His palette was dull, murky even, with only occasional bright encroachments. These works were essentially abstractions, although at times employed figurative suggestion, such as in Leda and the Canadian Honker, 1957, and the incorporation of text, as in Exodus, 1958.

By the late 1950s, Kienholz was increasingly exploring three- dimensionality, and The Medicine Show, 1958-59, with its applied forms that open and swing into space, was the first work he created that had a fuller sculptural quality. The Little Eagle Rock Incident, 1958, was the first painted construction to employ a found three-dimensional object – a deer head. Kienholz favored the use of taxidermy and found animal parts throughout the rest of his career, evidenced also in later works such as The Caddy Court, 1986-87, The Potlatch, 1988, and The Merry-Go- World or Begat By Chance and the Wonder Horse Trigger, 1988- 1992, all of which he created with his wife and partner, Nancy Reddin Kienholz. Despite the emergence into assemblage and tableau, Kienholz retained his identity as a painter, through the use of painterly gesture and the application of resin prevalent throughout the life’s work.

Also in 1959, Kienholz made his first free-standing work: Mother Sterling. Comprised of a dressmaker’s dummy, the bottom third was converted into a wire cage that held altered fragments of dolls, covered in resinous drips. It is strikingly figurative, and while relatively modest in scale, this work heralded the form, material, subject and approach that unfolded over the artist’s career. The representation of the body, as a whole or in part, was an absorbing aspect of Kienholz’s work in the years that immediately followed: One and One Half Tits, 1960, and Flow Gently Sweet Often, 1960, are just two examples in this exhibition.

Kienholz’s developing interest in exploring racial, political and socio-economic issues are also in clear evidence with It Takes Two to Integrate (Cha Cha Cha), 1961; The American Way II, 1960, which features a severed deer head encircled by a garden hose; The U.S. Duck or Home from the Summit, 1960 (Michael and Dorothy Blankfort Bequest, LACMA); America My Hometown, 1963, in which he incorporates an American flag within its form; and Instant On, 1964, which references the Kennedy Assasination. America My Hometown, Ida Franger, 1960, and Sleepy’s Hollow With Handle and Wheels, 1962, include lighting elements, which later became an integral aspect of most Kienholz’s large-scale tableaux. For instance, this aspect of the work crescendoes in the politically and electrically charged, bulb-studded tableau Ed and Nancy created in Idaho in 1985, The Ozymandias Parade.

Kienholz’s awareness of the cultural life that surrounded him, in addition to issues in the world at large, are strikingly evident in this early body of work. The upturned chair in The Sky is Falling: Act One, 1963, playfully acknowledges Marcel Duchamp’s Bicycle Wheel, 1913. We also see Kienholz’s first use of a small television in Instant On, 1964, which recognizes the increased hegemony of the media; the sight and sound of which reappears in many other works during his career, such as The Eleventh Hour Final, 1968, and The Commercial, 1971-1973.

The 1966 Kienholz exhibition at LACMA was the first show devoted to a Los Angeles artist since the museum had opened the previous year. It was seized upon by the County Board of Supervisors for its supposed pornographic and indecent content, and was utilized as a vehicle for political gain. Amid threats to close the museum, a public and media outcry ensued that both kept the exhibition intact and led to record-breaking crowds. In this current exhibition, “…. we focus on the importance and vigor of the early works of Ed Kienholz which could hardly be seen through the clouds of confusion set off by the controversy.” —Maurice Tuchman

Over forty-five years later, Kienholz before LACMA provides the opportunity to see the awakening of a major artist and view his work unfettered by the furor of his time; to recognize the art for its rigorous, uncompromising and ever- relevant content. Of the 21 works that will be on view in L.A. Louver’s exhibition, eight were included in Kienholz’s 1966 Retrospective.

Kienholz Before LACMA is accompanied by a full-color publication that includes an essay by Maurice Tuchman, complete with a timeline of the events that unfolded at the time of the 1966 LACMA exhibition, and foreword by Peter Goulds, Founding Director of L.A. Louver. L.A. Louver has represented Edward Kienholz and Nancy Reddin Kienholz since 1982.

Concurrently on view in L.A. Louver’s second floor galleries: Tom Wudl: Works from 1971-1979. An exhibition of mixed media abstractions from the ground-breaking decade of this Los Angeles artist’s career.