As a 4th generation Angelino, it is pretty odd that up until yesterday I had never attended the Tournament of Roses Parade in Pasadena. Although my parents used to go when they were children, they did not continue that tradition with my family (although they did nag / ask us kids many times if we wanted to go). When I was a teenager I obviously had “much more important things to do” than go to a silly parade and in my twenties I pretty much slept all New Years day if you know what I am sayin’. When my Mom asked me this year if I wanted to go, I couldn’t think up a good excuse not to.

The Rose Parade and the festivities that lead up to it are awesome. If you haven’t gone, you should make the effort to check it out as it is a great party for all ages. This year the parade had 44 floats, 16 marching bands and 22 equestrian troupes, but that was only part of the excitement. The best part for me was checking out the party on the street the night before: the 5.5-mile parade route is used as a pre-parade camping ground for hundreds of thousands of parade revelers. 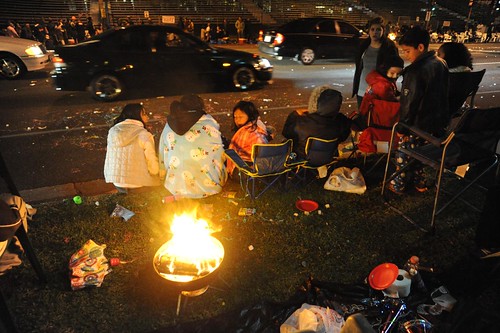 Upscale attendees bring RV’s and rent spaces in businesses along the route to watch the parade from. If you go with a large group of people, it is nice to have a “home base” like this with a clean bathroom. The majority of revelers just bring air mattresses to sleep on and chairs to hold their spots for the parade. Chimineas and BBQ grills are allowed so people cook dinner on the street and party the night away playing cards and throwing stuff at passing cars. 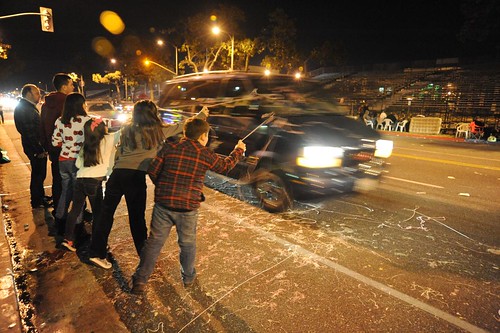 A fun tradition of the “night before” is the “pre” parade: cars drive up and down Colorado while children (and many adults) throw tortillas lined with whipped cream, marshmallows and “silly string” at them. Seasoned vets soak toilet paper in water to throw at the cars (it is more cost effective). Some cars retaliate with water balloons, marshmallows and “silly string” of their own. 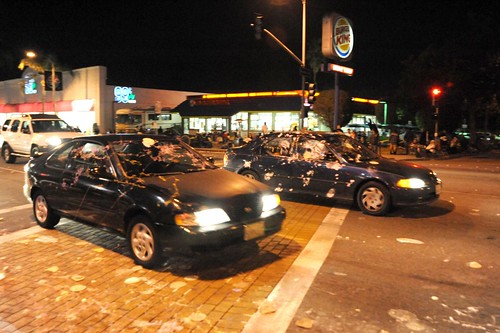 The exchange between the vehicles and the kids (and the LAPD) is polite and festive. Cars honk and roll down their windows to engage … parents offer up “not this one” when the “show cars” that car clubs drive up and down the street come by.

DJ’s set up, vendors sell all types of food, many bars and restaurants stay open and people walk around all evening with big smiles on their faces celebrating the new year. There are a lot of people, but it does not feel too “crowded”.

– The parade is FREE. It is best to stake your curb at 12-3pm or so the day before the parade. You can walk around once you establish your “zone”.  At 11pm they block off the streets so latecomers can then take over the intersections.

– Tickets in the stands can be had for $55 and up – parking is $30 through them but many local businesses charge $20 for parking.

– Sit on the South side of the street or you will be looking into the sun during the parade!

– Go eat lunch after the parade – an hour after it ends traffic really isn’t bad!

This year the parade was held on the second but I’ll be back to check out the “real” new years party next year! This is great (and cheap) fun for the family, but also a great party for the parents! It is also a great place for a group of friends to go set up and have some fun!