See all those cop cars wailing down Pacific? An LAPD officer got hurt taking a guy down. The suspect is hog tied in the back of cop car and the officer has an ambulance called for him as of 10:15 pm. 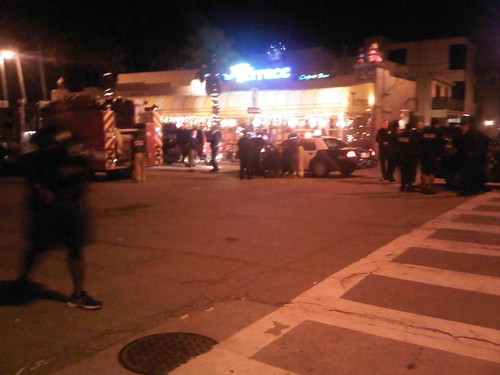 Back story: A red Ford Explorer was pulled over by the LAPD .. the driver tried to fight off getting handcuffs on him with “super human strength”, injured an officer and then 10 or so undercover cars and a boatload of cops and an LAPD helicopter showed up to the party.

The guy rolled down Washington speeding. For about ten minutes the cops tried to get him out of his car but he would not stop blasting his music or roll down his window to deal with them. I thought he was going to get yanked for a DUI or something.

When they got him out of the car he was talking mad sh*t like “fu*c you pigs” and then he kicked a cop and dropped him to the ground. I thought the driver got a solid hit to the cops nads but the LAPD said it was to the cops leg. The driver was super aggro, I’d guess he was on the drugs.

After that so many cops showed up you have never seen so many cops. Don’t kick a cop in the leg or every cop in LA will show up! Ambulance showed up after that, aggro driver dude was put in a cop car and kept talking smack.

Everyone on Washington is still open for business tho!