Early Saturday evening (9.10.11) this dude was knocking people off their bikes, punching cars and throwing himself at cars.

It took place around the 600 block of Washington and went on for about 15 minutes. It ended when someone stopped and he got in their car (5:00). That car then drove to Washington and Abbot Kinney where about 6 cop cars were waiting for them (5:36). Most bizarre thing I’ve ever seen in Venice in the 5 years I’ve lived here. 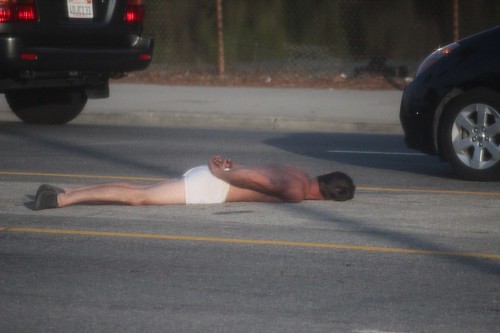 A source at the LAPD says calls from witnesses originally came in for a guy on PCP with erratic behavior. Upon arriving at the scene, they learned that this originally started with a “right of way” dispute on the sidewalk. The suspect was blocking the sidewalk with a bicycle and a citizen asked him to move. After the exchange of some words the citizen pepper sprayed the suspect. The spray did not appear to bother the suspect, but afterwards he did strip down and started attacking random passers-by.

The suspect was booked for one count of battery but is under investigation for additional counts of battery and vandalism, including vandalism on a police car.

Hope the guy gets the help he needs!