Marine Contemporary will host an opening for Jow’s “A California Minute” on September 10th from 6-9pm. The show will run until October 15th. 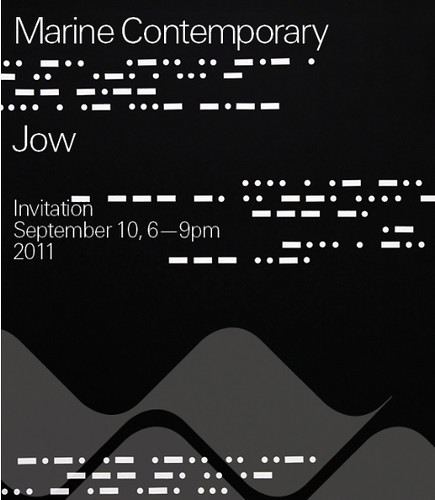 C – the dit dit dah of Morse code travels through the
A – dark blue water, white tipped waves beneath the moonlight
L – displaced in a foreign land
I – longing to be back in California
F – distance + desire
O – comforted by the lyrics from that familiar tune
R – sunshine, sand, blue skies, palm trees, LEMONS
N – soul, stars, girls, nights
I – slow pace, laid back, dreamin’
A – California minute

Marine Contemporary is pleased to present A California Minute, Jow’s first solo exhibition with the gallery. The predominant focus of this show is lyrics from songs about California from the 1960’s and early 1970’s. For the last five years, a significant part of Jow’s work has focused on text and word play with a special emphasis on signs and symbols. More known for her witty and irreverent drawings on vintage letterhead paper, this show marks a departure from that body of work and focuses more on the artist’s love for language in its purest visual form.

For A California Minute, Jow explores the complexity of California’s allure and fantasies about the Golden State’s promise through the simple dots and dashes that articulate Morse code. Extending out of her earlier work with Braille, Jow became interested in Morse code, not only for its capacity to communicate language and its romantic sense of nostalgia, but also because its graphic qualities are reminiscent of work by minimalist artists of the same period.

Each Morse code painting represents different songs, which include:

This show is scheduled to run during Pacific Standard Time, The Getty’s citywide initiative to explore the history of art in Southern California from 1945 to 1980.

The paintings and drawings in A California Minute are particularly sensitive to this period, honoring and celebrating a special part of California history to which all artists living and working in Los Angeles feel an affinity. As a gallery, our location in Venice, where many key Los Angeles artists including Ed Ruscha, John Baldessari and Charles Ray, started working and have or had their studios for many years is also a factor in our choice to schedule this show at this particular time and celebrate Pacific Standard Time.

Jow (b. Vancouver, Canada) studied fine arts at Capilano College and the Emily Carr Institute of Art + Design in Vancouver before relocating to the United States. She has previously exhibited her work in Vancouver, New York and Los Angeles. She presently lives and works in Los Angeles, CA. A California Minute is Jow’s solo debut at Marine Contemporary.

We are open Tuesday – Saturday, 11am-6pm and by appointment. Parking is available on premises.