The New York Times is running a piece about Venice in tomorrows print edition. It is online now. From the NY Times: 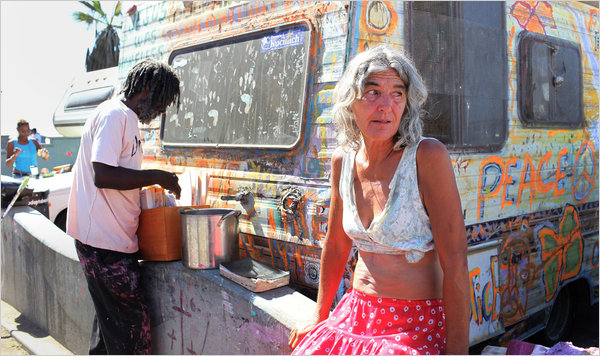 LOS ANGELES — Every day, Diane Butler and her husband park their two hand-painted R.V.’s in a lot at the edge of Venice Beach here, alongside dozens of other rickety, rusted campers from the 1970s and ’80s. During the day, she sells her artwork on the boardwalk. When the parking lot closes at sunset, she and the other R.V.-dwellers drive a quarter-mile inland to find somewhere on the street to park for the night.

Their nomadic existence might be ending, though. The Venice section of Los Angeles has become the latest California community to enact strict new regulations limiting street parking and banning R.V.’s from beach lots — regulations that could soon force Ms. Butler, 58, to leave the community where she has lived for four decades.

“They’re making it hard for people in vehicles to remain in Venice,” she said.

Southern California, with its forgiving weather, has long been a popular destination for those living in vehicles and other homeless people. And for decades, people living in R.V.’s, vans and cars have settled in Venice, the beachfront Los Angeles community once known as the “Slum by the Sea” and famous for its offbeat, artistic culture.

Yet even as the economic downturn has forced more people out of their homes and into their cars, vehicle-dwellers are facing fewer options, with more communities trying to push them out.

As nearby neighborhoods and municipalities passed laws restricting overnight parking in recent years, Venice became the center of vehicle dwelling in the region. More than 250 vehicles now serve as shelter on Venice streets, according to the Los Angeles Homeless Services Authority.

“The only place between Santa Barbara and San Diego where campers can park seven blocks from the beach is this little piece of land,” said City Councilman Bill Rosendahl, whose district includes Venice. “Over the years, it’s only gotten worse, as every other community along the coast has adopted restrictions.”

In the past, bohemian Venice was tolerant of vehicle-dwellers, but, increasingly, the proliferation of R.V.’s in this gentrifying neighborhood has prompted efforts to remove them.

“The status quo is unacceptable,” said Mark Ryavec, president of the Venice Stakeholders Association, a group of residents devoted to removing R.V.’s from the area. “It’s time to give us some relief from R.V.’s parking on our doorsteps.”

A bitter debate has raged between residents who want to get rid of R.V.’s and those who want to combat the problems of homelessness in the community by offering safe places to park and access to public bathrooms. Last year, residents voted to establish overnight parking restrictions, but the California Coastal Commission twice vetoed the plan.

However, a recent incident involving an R.V. owner’s arrest on charges of dumping sewage into the street has accelerated efforts to remove vehicle-dwellers. Starting this week, oversize vehicles will be banned from the beach parking lots; an ordinance banning them from parking on the street overnight could take effect within a month.

While Mr. Rosendahl supported parking restrictions, he has also secured $750,000 from the city to pay for a pilot program to house R.V.-dwellers. Modeled after efforts in Santa Barbara and Eugene, Ore., the Vehicles to Homes program will offer overnight parking for vehicle-dwellers who agree to meet certain conditions, with the goal of moving participants into permanent housing.

“For people who want help, we’ll support them,” Mr. Rosendahl said. “The others can take their wheels and go up the coast or somewhere else, God bless them. It’s not our responsibility to be the only spot where near-homelessness is dealt with in the state of California.”

While some have expressed interest in the program, many said they did not want to subject themselves to curfews and oversight or had no means or desire to return to renting. Mr. Ryavec believes few will participate.

“I will not debate that some people are mentally ill, indigent or drugged out,” Mr. Ryavec said. “But my stance is that the bulk of these people are making a lifestyle choice.”

Still, according to Gary L. Blasi, a law professor at the University of California, Los Angeles, and an activist on homeless issues, most people choose to live in vehicles only when the alternative is sleeping in a shelter or on the street.

“The idea of carefree vagabonds is statistically false,” Professor Blasi said. “More often, these are people who lived in apartments in Venice before they lived in R.V.’s. The reason for losing housing is usually the loss of a job or some health care crisis.”

Even if all the vehicle-dwellers in Venice wanted to participate, the pilot program will accommodate only a small fraction of them. In Southern California, though, there may not be anywhere else R.V.’s can legally park. According to Neil Donovan, executive director of the National Coalition for the Homeless, ordinances banning R.V.’s have spread from metropolitan areas into the suburbs as vehicle-dwellers venture farther afield in search of somewhere to sleep.

“Communities are now forming a patchwork of ordinances, which virtually prohibits a geographic cure to the situation,” Mr. Donovan said. “If you’re in a community and they tell you to leave, you can’t just go to the next community, because they establish similar ordinances, especially in California.”

Mr. Donovan said vehicle-dwellers often end up on the street after their vehicles are towed or become inoperable. When his organization surveyed tent camps in California, they found that many residents had come from R.V.’s.

Vehicle-dwellers in Venice are now considering their options, but few expressed any intention of leaving.

“They can keep throwing more laws at us, but we’re not just going to go away,” said Mario Manti-Gualtiero, who lost his job as an audio engineer and now lives in an R.V. “We can’t just evaporate.”
A version of this article appeared in print on October 4, 2010, on page A9 of the New York edition.