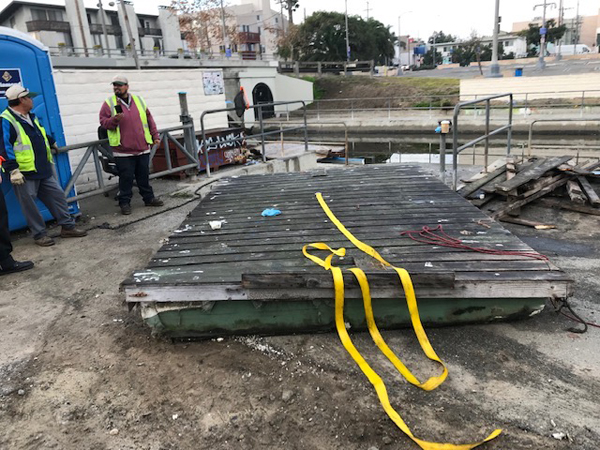 It’s been over a week since a video of Rebecca Dannenbaum and her makeshift barge floating in a Venice canal first made news, sparking a debate over whether or not Dannenbaum was breaking any laws or endangering the environment.

The unique circumstances of the incident raised the question of who was responsible for the final decision regarding the barge. In an interview with news outlets, LAPD Pacific Area Captain Brian Morrison explains, “The canals themselves are managed by Bureau Street Servies. It’s a thoroughfare just like a street or any other public access road. They have jurisdiction over that.” Morrison continues, “With regards to enforcement action, something of that size is considered blocking the thoroughfare in which case it then goes to sanitation to remove any obstacle. What complicates that is a division of Sanitation, Watershed. This waterway flows out to the ocean so there are concerns as to whether or not there’s any illegal dumping, whether that’s human sewage, whether it’s gas or oil from the generator. Anything like that could pollute the ocean, and Watershed would have the ultimate jurisdiction and that would mean an immediate removal.”

The other concern was a question of who the barge belonged to. Morrison adds, “If that is stolen property that someone has now occupied, if that victim would come forward then we would step in to recover that property for that victim.” While some Venice residents complained that Dannenbaum lived on the barge, Dannenbaum claimed that the barge was simply a place to store her belongings. She made the barge out of salvaged wood and part of a discarded dock to store the things she couldn’t fit in her RV, like a generator used to charge Lime electric scooters.

Following multiple complaints from residents, the Sanitation Department informed Dannenbaum that she had to remove her belongings from the barge due to it blocking a public right of way and a leaking generator. Sanitation workers removed the majority of what was left behind. An LAPD investigation concluded that the barge had been abandoned and Dannennbaum broke no laws by using it.

Venice resident Andrew Tunks  who works in professional research of the homeless in Venice and the greater Los Angeles area, started talking to Dannenbaum during his commute home from work. “I think she should’ve been allowed to stay. She wasn’t hurting anyone there,” Tunks explains. “She was trying to build a life there and have some kind of permanence and ability to support herself while doing things in the community. She was charging the electric scooters, and I think she was quite respectful. She really tried to keep the area clean and make sure she wasn’t getting in anybody’s way. She was very careful how she set the scooters back up once she charged them. And I think she had some pride in that space.”

The incident involving Dannenbaum sheds light on another major issue within the homeless community. With nearly 130,000 homeless people living in California alone, most shelters allow one suitcase per person who stays there. For those carrying their belongings in carts and plastic bags, they struggle with safe places to keep their belongings. Tunks explains, “They have their things, and then they get shuffled around constantly. There is cleaning every morning, and if they don’t get their stuff out in time, all their worldly belongings get thrown away. I don’t really understand why we haven’t really dealt with this a little better.” Tunks continues, “People are tied to their belongings. They can’t really do anything because they have to watch their stuff. They’re constantly getting robbed. I met a young guy in Hollywood who had been saving up for headphones. He wanted to be a music producer, and he finally got these amazing headphones that cost him $130. He got robbed within two days. He knows who did it, but he can’t do anything about it. It’s a constant struggle.”

While there are free storage units available where the homeless can temporarily store their belongings, there still isn’t enough room to meet the growing homeless population. According to the Venice Community Housing website, “The Free Storage Venice (FSV) program serves our homeless community members by providing a safe place for them to store their belongings and important documents, allowing them to travel, attend interviews or appointments and prevent theft or damage to their personal belongings.” FSV provides 26 storage bins for one hour a day, but it’s still not enough to help those who need places to hold their belongings for longer periods of time. City officials are working on legislation that could lead to more voluntary storage programs for those in need.

With all the coverage in the media regarding Dannenbaum and her raft, Tunks believe the news painted an inaccurate picture of who Dannenbaum is. “She’s always been kind and very honest,” Tunks explains. “I think she has her issues. People say that she’s more than capable of working, she’s lazy and just wants to sponge. She probably has some serious issues, and I don’t think she’s in the best mental state. Fundamentally she’s a kind person just trying to make a life for herself.” Tunks adds, “I’ve had mental health issues when I couldn’t imagine working for a long time. I could barely get out of bed. If you haven’t experienced that, I think it’s hard to understand. I think she’s done a wonderful job of figuring something out that works, and it’s unfortunate that we kind of stomp all over that as a society. People deserve to have a space, even if it’s just storage, and some kind of way of not just being shuffled around constantly. It’s so disruptive to your happiness and ability to get out of a situation.”