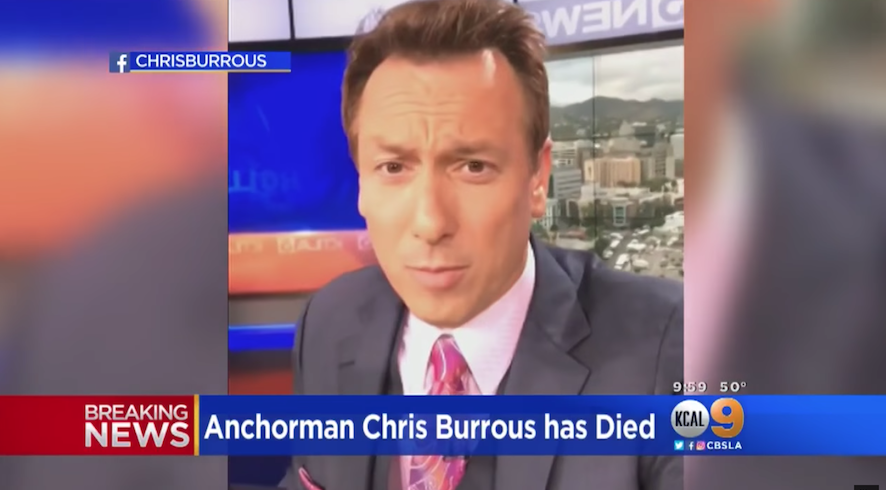 Chris Burrous, the KTLA-TV weekend news anchor, was found unconscious due to a potential overdose in a Glendale motel room Thursday afternoon and later pronounced dead at a local hospital, according to the Glendale Police Department.

“Our thoughts and prayers go out to the Burrous family,” KTLA President and General Manager Don Corsini and news director Jason Ball said in a joint statement Thursday evening. “Chris loved sharing the stories of Southern California and connecting with our viewers. He will be remembered as a great journalist and a wonderful friend to many. He brought a kindness to his work and will be deeply missed by the entire KTLA family.”

On December 27, 2018, at 1:14 p.m. the Glendale Police Department (GDP) received a call from a male saying that the individual he was with had passed out and was possibly not breathing. The caller indicated in the call that they at the Days Inn in Glendale, located at 450 Pioneer Drive.

“The Glendale Fire Department responded to the scene and found a man down inside a room suffering from a medical emergency. The man was not breathing and CPR was administered as paramedics prepared to transport him to the hospital. The man was later pronounced dead at the hospital,” reads a GDP press release.

The man was identified as Burrous, the 43-year old KTLA weekend news anchor from Porter Ranch.

The caller to police stated Burrous may have overdosed, but detectives are still awaiting the Los Angeles County coroner’s office report before releasing a determination of the cause of Burrous’ death.

The original call to the Glendale Police Department indicated the deceased had possibly overdosed. Glendale detectives are currently investigating the case and are thoroughly examining the unfortunate circumstances surrounding his death.

Burrous, who joined KTLA in 2011 is survived by a wife and 9-year-old daughter.