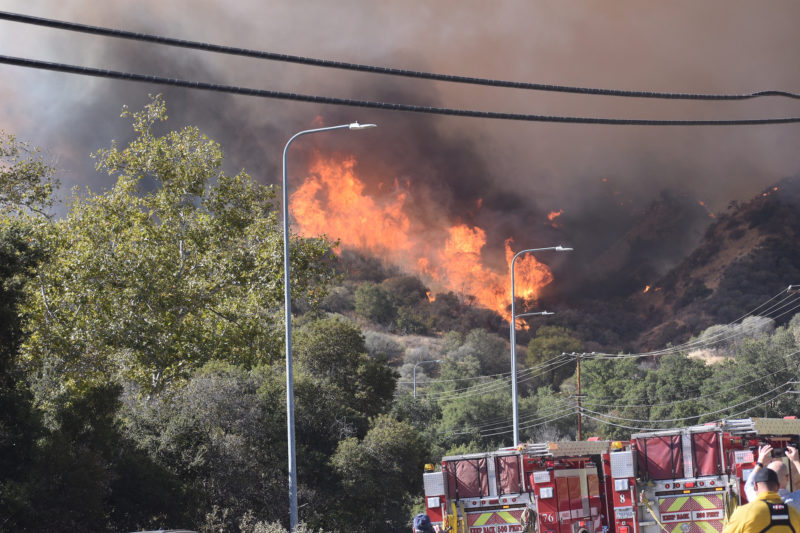 As the Woolsey Fire burns through over 90,000 acres of Los Angeles and Ventura counties, destroying at least 370 structures and forcing 250,000 people to evacuate, firefighters continue to combat the blaze, which as of noon Monday was at 20 percent containment.

The fire, which has caused the fatalities of two people and injured three firefighters, has forced mandatory evacuation orders in the cities of Malibu, Topanga, Calabasas, Agoura Hills, Westlake Village and Hidden Hills. Evacuation orders for parts of Thousand Oaks were lifted Sunday evening. At the time of publishing, the fire is threatening 57,000 structures. Officials are urging those displaced by the wildfire to not return until first responders declare the area safe and lift mandatory evacuation orders.

“It may look safe enough to go back and check on your home, but don’t do it,” said Los Angeles County Fire Chief Daryl L. Osby at a press conference this morning. “The potential dangers you may encounter could cost you your life. We will let you know when it’s safe to go home.”

Although it may appear that fire threats have passed in some communities, officials cautioned that conditions remain unstable and can shift suddenly dangerously with changes in wind patterns and other unpredictabilities. Dangers within the impacted area include live embers, landslides, unhealthy air quality and downed live power lines.

“A red flag warning remains in effect. Weak and moderate Santa Ana winds continued through the overnight hours and relative humidity recovery was very limited. Today, strong winds are expected to continue into the early evening and relative humidity will remain in single digits,” CAL FIRE said in a press release Monday morning.

According to CAL FIRE, firefighters are expected to contain the Woolsey Fire by Saturday, November 17.

The closest evacuation center to Brentwood is Palisades Charter High School. Several hotels in Santa Monica have made rooms available for fire evacuees, including facilities that have accommodations for families and small pets.

Officials urge residents to help with cash donations but cautioned members of the public to beware of financial scams related to wildfire recovery support.

“[We are] urging that donations be made to reputable first responder, relief, and animal‐aid organizations,” Los Angeles County Emergency Operations Center said in a press release. These include the American Red Cross, United Way and Los Angeles Fire Department Foundation.

The cause of the fire is still under investigation.

Follow the LAFD on Twitter @LAFD for the most up to date information. For the latest information on road closures and fires, please monitor https://www.chp.ca.gov/home/california-wild-fire-resources.