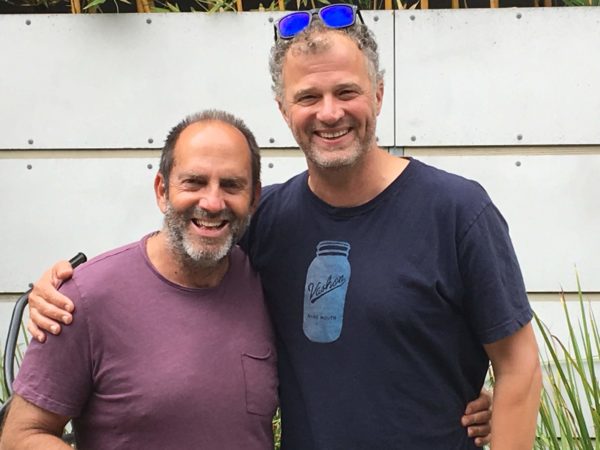 Ben Weber is an actor, writer and a master of improvisation. His uncanny insights into human behavior, intelligence, irreverence, dead-pan humor and empathy for mankind makes for characters that stand the test of time and evoke laughter in the highest degree. Ben was born in Bellingham, WA, went to high school in Seattle and attended NYU as an undergrad. While at NYU Ben, worked nights at the Boston Comedy Club where he got an agent, a manager and his first taste of life on location, the set of “Twister” shot in Ponca City, Oklahoma, with Helen Hunt and Bill Paxton.

Later Ben appeared in “Sex and the City,” “Law & Order,” and many other New York pilots and long-running TV shows before venturing west with his wife, Kara. The newly married Webers landed in Venice in 2001, started a family, and Ben expanded his resume to include film and memorable TV commercials like the Geico Caveman. More recently Ben played FBI agent Andy Genelli in the critically acclaimed Discovery Channel movie series, “Manhunt: Unabomber.”

Ben attends class at my studio in Venice, RAW acting studio, digging deeper into the craft, creating characters that affect you on a visceral level and is continually experimenting with new material.

Guy: Hi Ben, let’s get right into it. I’m curious, who are you in the world as of today?

Ben: I am an actor and stay-at-home stand up comedian.

What’s informing you artistically or in general?

I love reading the New York Times on Sunday. I always start with the Travel Section because it never makes me feel jealous or insignificant (Arts section looking at you!)

What role does art play in your life?

The “Great British Bake Off” on Netflix has a calming effect on me right now even though its about competitive baking.

Need to! I started taking improvisation classes at the age of 13. It saved my ass because I wasn’t a jock or a nerd. I looked like Bill Gates or Bill Nye, but without the drive to revolutionize personal computing.

You are an enthusiast of improvisation and teach improv workshops in Venice for actors and non-actors. What is it about improv that you like so much?

Improv is great for getting over whatever hurdles you have in life mental or physical, and arriving at something beautiful right away.

Nice, I love that and couldn’t agree more. You have been in Venice for many years. Describe what living in Venice was like back in the day, and what it’s like now?

We moved here in 2001 and LOVED the fact that you could walk everywhere, especially with young kids in strollers.

Anything that you miss about the old Venice?

Not long after my first son was born I discovered a group of dads that met up every morning at Abbot’s Habit. The kids would play and the moms would get to sleep in. Later I came to appreciate Abbot’s for the crusty creative types — writers, poets, actors and junkies that hung out there. It was unfortunate when Abbot’s closed in 2017. Venice became A LOT less crusty.

Fortunately, that summer, my friend, Jordan Roberts, (Burn Your Maps, Big Hero 6) introduced me to you, Guy, outside of GTA (Gjelina Take Away). A week later I was in your Wednesday class at the Electric Lodge — happy to be around crusty creative types again — sans the junkies, thank god.

What would you say to someone who is considering becoming an actor?

Learn how to create and tell a story without waiting for anyone to give you permission.

And, what if they decide to go for it. What advice would you give?

What does attending a weekly class do for you?

It’s like sitting in with the greatest studio musicians in the world — only I don’t play an instrument.

What role does authenticity play in your life?

I’m most in touch with my authentic self when I’m doing the laundry or washing the dishes. Also, that’s where my best ideas come from.

Boom! You just can’t teach that kind of timing. Okay, how do you define intimacy?

Something that only happens when you let your guard down and get out of your own way.

Guy Camilleri is a Venice-based actor, acting-life coach, and poet. His classes are packed with actors, writers, directors and creative people from all walks of life on Monday and Wednesday evenings at the Electric Lodge, in Venice.

By Yo Venice Staff September 24, 2018
in Westside Wellness
Related Posts