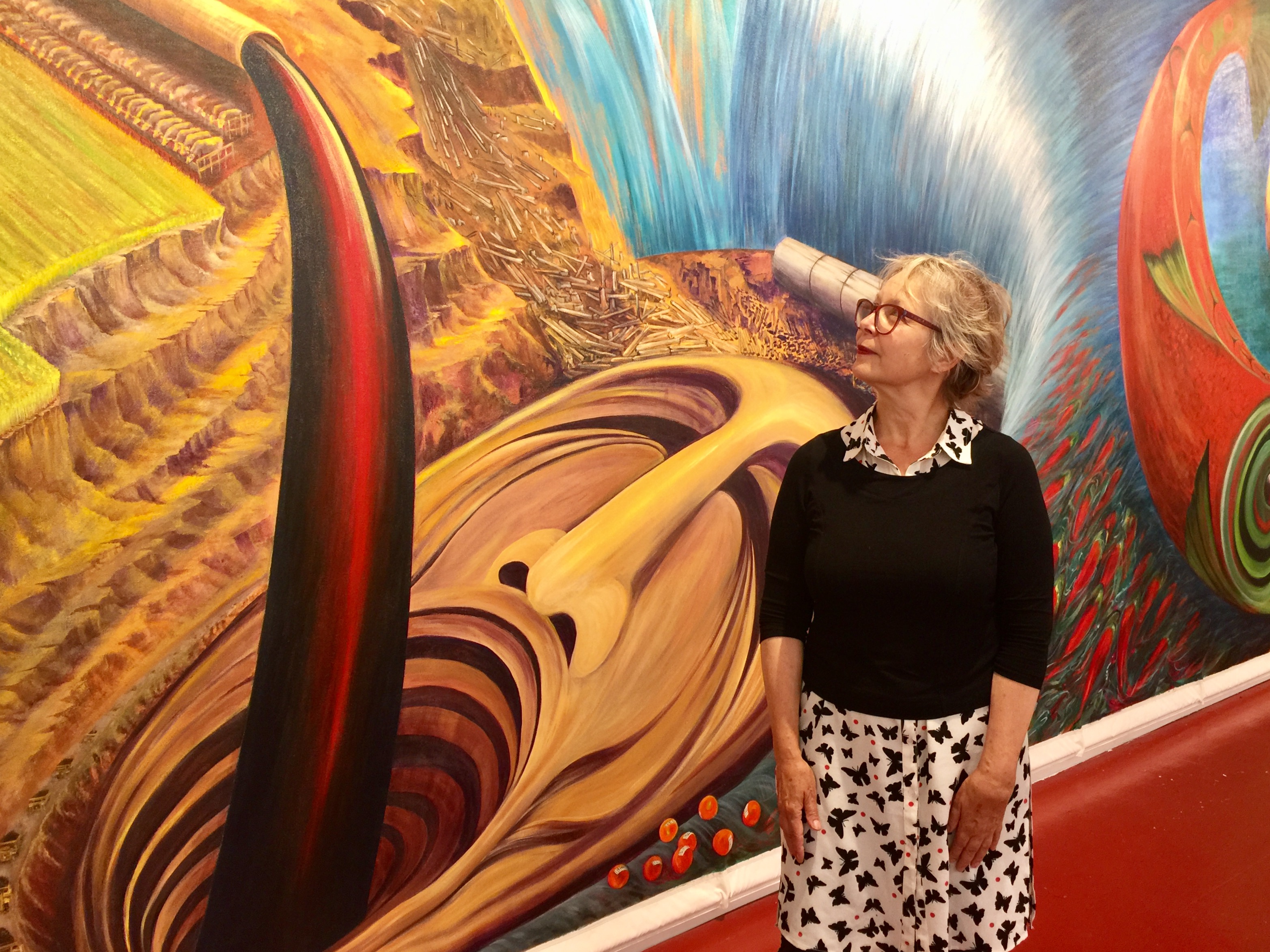 The Social Public Art Resource Center (SPARC)’s latest exhibition makes a powerful statement warning of the perils of global warming and the exploitation of natural resources.

Celebrating activism through art, Venice locals and Los Angeles art lovers will head to the Durón Gallery inside SPARC’s headquarters at 685 Venice Blvd., on Saturday, July 15, to witness the unveiling of the latest contribution to Artist Judy Baca’s, The World Wall: A Vision of the Future Without Fear.

Canada is the latest country to contribute to the World Wall. “The Inuit Send the World a Canary” by lead artist Tania Godoroja Pearse highlights the profound and uncontrolled destruction of Canadian life and landscapes.

The 10 foot by 30-foot mural holds many stories. A geologist turned environmental activist, Godoroja Pearse’s husband, Tony Godoroja Pearse has helped with much of the research behind each issue represented in the piece.

“Tony always calls this our voracious appetite for consuming everything. We can’t stop driving our cars. We need more and more and more and more. But it’s also the pillaging of the earth and the crying earth,” Godoroja Pearse told Yo! Venice, pointing to a pipe spilling a brown-black fountain of oil into the open mouth of a pained face.

Godoroja Pearse’s piece also includes the image of a young woman holding a hat from which spills binary code that spells “we are all connected.” It is a nod, not only to the connectedness of all humans and the earth but also, the connecting of people via another kind of world web, “First Nations communities in the North are using the internet for keeping in touch with movements like Idle No More. So they’re all interconnected,” said Godoroja Pearse.

An idea future without fear for Godoroja Pearse is “to stay connected with nature and to teach young children to find the magic in the microscopic…taking your kids to a tide pool or a walk through the forest because that spurs questions and investigations of all kinds.”

“The Inuit Send the World a Canary” has been almost a decade in the making and once ready to start the painting, Godoroja Pearse faced the dilemma of finding a studio big enough on Canada’s tiny Mayne Island. In the end, “we painted it in a neighbor’s tractor shed.”

The World Wall: A Vision of the Future Without Fear began its global travels in the early 90’s in Finland, “as an area for dialogue,” Baca told Yo! Venice. After Finland, the installation traveled to Russia at the fall of the Communist Party. “We were invited by daughters and sons of Enemies of the State to open in Gorky Park.”

Baca and her team shipped over a ton of art into Russia for the exhibition. “It was the first American exhibit of any scale. It was an amazing experience. Over 150,000 people came,” said Baca.

Whether supporting nuclear disarmament, celebrating the fall of dictators, or challenging climate change; the installation has always found its way into cities at a tipping point. Except for the unveiling of the Israeli/Palestinian contribution which had to be moved from Jerusalem to Fodor because “the Green Line went down and the fighting had begun,” said Baca.

The idea for the World Wall came from Baca’s Great Wall, a half-mile mural in the San Fernando Valley’s Tujunga Flood Control Channel that shares the history California’s ethnic people from prehistoric times through to the 1950’s.

“At a time when we’d gotten to the 1980’s, and we were in an escalation of the arms build up in the United States, and my kids said, ‘you know what? We should get a ship,’ and they wanted to sail around the world and have murals done in every country. Regan had become elected President. He was a big war and arms build up guy, so that’s when we started thinking about it,” said Baca.

While the ship part was perhaps a little over ambitious, Baca still thought a globe trotting installation was, “a really cool idea.”

The World Wall examines contemporary issues of global importance: war, peace, cooperation, environment, interdependence, and spiritual growth. Currently made up of nine 10-foot by 30-foot portable panels, in its completed state, the mural will include fourteen works, seven by artists from different nations, and seven led by Baca. Currently, eight works are complete with plans in the pipeline to commission murals from Australia and Cuba.

The exhibition opens tonight and runs until October 13, in the Durón Gallery at SPARC’s historic headquarters, the Old Venice Police Station at 685 Venice Blvd., Venice, CA 90291

Where: The Durón Gallery. SPARC headquarters at 685 Venice Blvd.