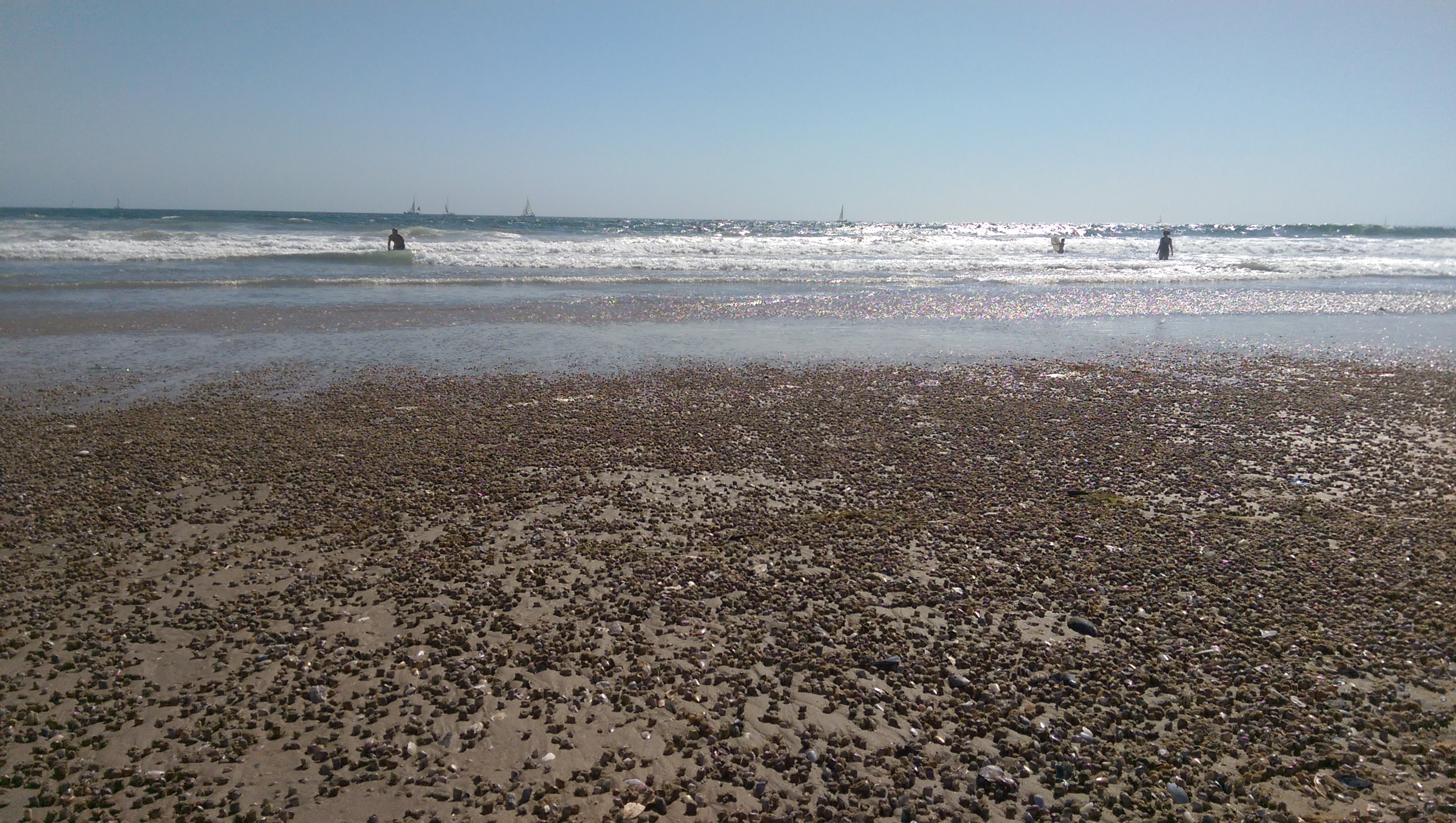 With record-breaking high temps, the masses have wasted no time making their way to the beaches to cool off. Equipped with frisbees, beach chairs and caked on sunscreen, some settle into the sand while others head into the water. Dipping their feet into the whitewash, their faces are showered instantly with a salty mist. And feeling a tickle, almost a nibble, on their toes, they look down in surprise.

Not Sand Crabs, but Bean Clams are the culprit.

“Everyone is asking about these amazing clams,” said Nick Fash, Education Manager at the Santa Monica Pier Aquarium and Heal the Bay. Fash explained the Bean Clams have massive population swings.  “Right now we are in a boom phase, where the last few years we saw none,” he said.

These little bivalves are scattered all along the coast, revealing themselves increasingly during the low tides. Venice lifeguards speculate that this phenomenon only occurs a few times a decade, and that, while it’s not common, it’s not something to be concerned over. Sand layers brushed away, and low tides combined make for an abundance of clams on the shore.

Beach-goers show fascination and a childlike curiosity toward the clams, and children themselves take a more hands-on approach and pick them up into their little palms to poke and ponder on.

These specific clams are smooth to the touch, with light brown to purplish tints. From a distance, the shore can be mistaken for being covered in pebbles, but a closer look and you can even see some of them move and inch back into the sand. They live close to the surface of the sand and are packed and cuddled tightly together. “The tuft you see sticking out of them is actually a separate animal known as a Hydroid (Clytia bakeri) and it uses the clam as a host,” said Fash.

A local surfer tells Yo! Venice, “I’ve never seen this many of them here before. It’s quite a sight. Some of them are only the size of a fingernail.”  With the pollution and recent oil spills in Southern California, he wouldn’t suggest eating them.

Fash said the clams were once so numerous they were canned commercially in Long Beach. “While I would not eat any of them off this beach, they are supposed to have a wonderful nutty flavor from the broth made by boiling them.”

Clams have remained a popular treat on the west coast, however. The most commonly eaten and used aren’t Bean Clams, but Pismo and hard clams, and places like Santa Monica Seafood and The Venice Whaler Bar and Grill serve these up on the daily – the larger ones best in clam chowders.

According to California Department of Fish and Wildlife, clams can be dug for around the hours of sunrise to sunset, but there are current limits to how many you’re allowed to keep. And like with grunion catching, if you’re over 16 you’ll need a fishing license.

So if given a chance these sweltering summer months, make your way down to the beach to see if they’re still around.

Local crochet artist London Kaye is creating public art displays across the Westside and helping others express their artistic talents...