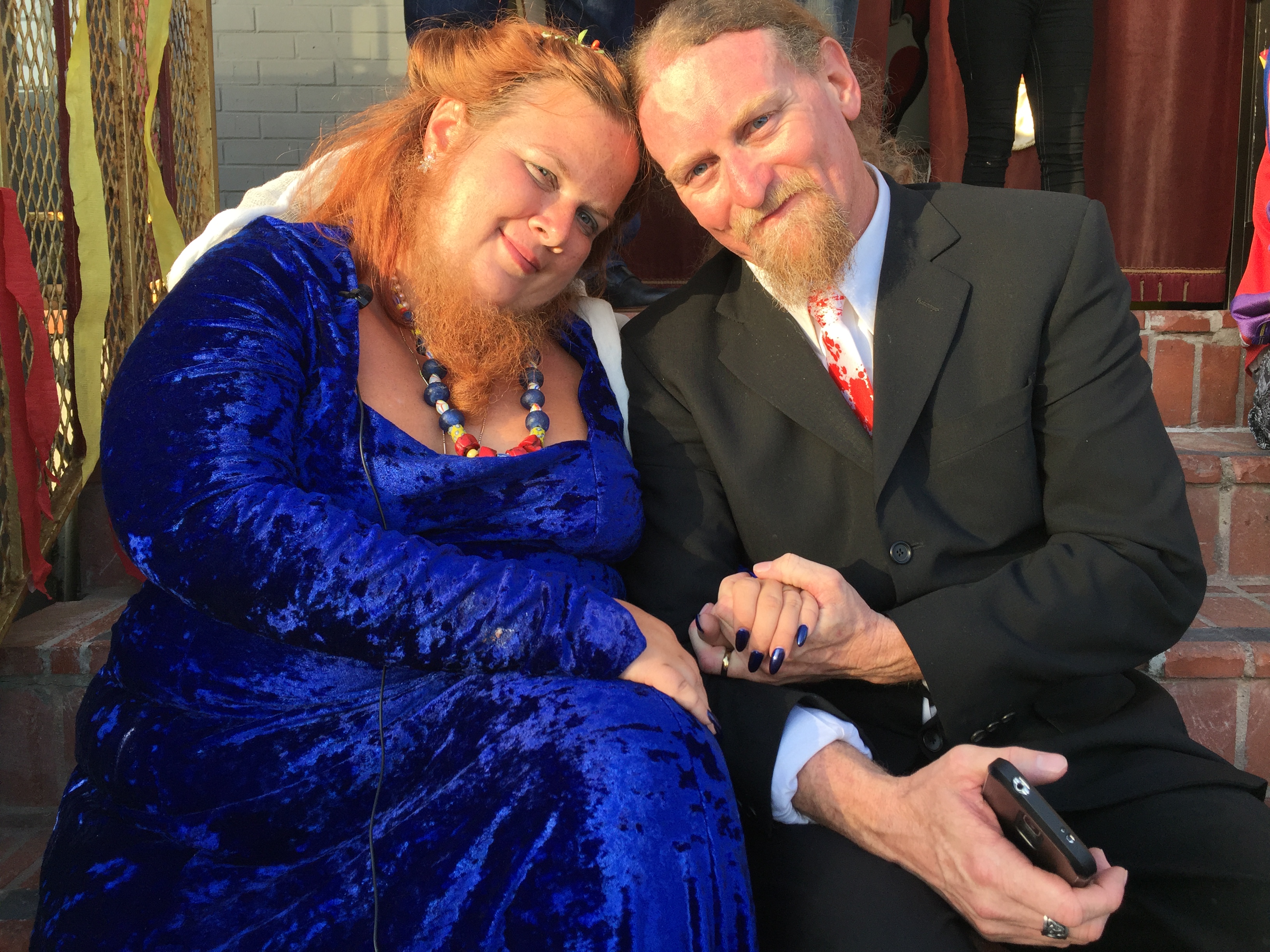 Venice’s famous Bearded Lady met her “gorgeous hunk of thing” through the Freakshow.

When the founder of the Venice Beach Freakshow, Todd Ray, first stumbled across a two-headed turtle “it blew my mind” he told Yo! Venice.

Ray said at first he thought it was something completely out of the ordinary. However, as he researched he discovered it was common “but people would put them down thinking they can’t be happy or healthy.” The realization that a two-headed turtle was not as unusual as he’d initially thought, further solidified his belief that there is no such thing as normal.

“Normal is dead,” said Ray. “We had a funeral for normal. Thousands of people showed up. We wanted to perform a funeral so people could see normal doesn’t exist. We put normal in a casket and buried him in the sand out the front of our building.”

Today, Ray’s two-headed Turtle is a happy and healthy 12-year-old, about to leave the place it has called home for the past 11 years.

Hundreds crowded the Venice Boardwalk on April 30th, 2017. The throng of fans booed as Ray explained why the Freakshow was moving out of their space at 909 Ocean Front Walk. “We have lost our space to corporate greed and development here in Venice Beach,” he said.

Overall, thousands passed by throughout the day to bid farewell to the Venice Freakshow. Christy, her husband Don, and their blue dog Lyric had traveled all the way from Canyon Lake “for the last hoorah.”

Jessica Burlingame works for the Freakshow as Venice’s famous Bearded Lady. She told Yo! Venice, “The Freakshow is my life.”

Teased at school and raised tagging along with her parents to Renaissance Fairs, Burlingame said she always knew she was different. The Freakshow was a place that showed her there was no such thing as ‘normal’ and that it was OK to be different. Just the thought of having to leave the Freakshow space in Venice “…rips my fucking heart out,” she said.

Burlingame met her husband through the Freakshow. “He was the roommate of a fan of the show and he himself had admitted to me that he had a crush on me,” she told Yo! Venice. The Freakshow’s last day was bittersweet as Burlingame and her “gorgeous hunk of thing” married before the crowd.

Burlingame said she didn’t want to think where she’d be without her Freakshow family. “There are many dark places one can go, but the one place of light is this foot on this step,” she said pointed to her foot on the stairway that once led to the Freakshow’s front door.

The Venice Freakshow farewell festival was one part party and another part protest.

The Venice Dogs, a group of Venice locals who oppose Snap Inc’s spread throughout the neighborhood, stood on Ocean Front Walk with flyers, and a petition. They yelled through megaphones and collected donations to fight the tech company, fueled by the rumor that Snap Inc was responsible for the Freakshow’s move.

Tourists on the Boardwalk spread the information. “Snapchat is kicking them out,” one told another.

As much as some in Venice love to hate Snap, so far, Snap’s connection to the Freakshow losing their lease is only in the coincidence of a name.

Beverly Hills-based Snapshot Partners LLC owns the lease to all the ground floor space at 909 Ocean Front Walk. The Venice Freakshow paid their monthly rent to this company.

Word on the street is Snapshot Partners are renovating the entire ground floor. Yo! Venice learned one of the potential new tenants had been a well know ice-cream chain, but that deal is not going ahead.

Without going too far into Los Angeles Municipal Codes; aside from where the Mellow Act protects existing residential use, the Coastal Commission prioritizes visitor-serving use, that is retail or restaurants, for all ground floor property along the Boardwalk. So unless Snap Inc plans on opening another Spectacle store, this makes the chance of them moving into the Freakshow space even more unlikely.

More fuel to the conspiracy Snap Inc is somehow responsible for the ousting of the Freakshow, was news the tech company is staying in the building. The reason for this is, even if Snapshot Partners wanted Snapchat out, they nothing to do with the tech company’s lease. Snap Inc sub-lease their third-floor office space off Jerde Partnership, an architectural firm.

A Snap Inc spokesperson told Yo! Venice the day before the protest, with future expansion into Santa Monica on the cards the company has no plans to spread beyond the office space they already have in the 909 Ocean Front Walk building.

Snap Inc have gone on the record denying any connection Snapshot Partners LLC. All evidence so far shows no link between the two companies. However, this did not deter The Venice Dogs.

A member of The Venice Dogs, Mark Rago, told Yo! Venice he hopes he is mistaken thinking Snap Inc are responsible for ousting the Freakshow. “I’d rather be wrong now and deter than have it get worse,” he said explaining why he continued to protest.

For Ray, it didn’t matter so much who was responsible for his beloved Freakshow losing it’s Venice home, for him it was more about the greed gentrification has attracted.

“Money is like ‘normal.’ Just a made up concept. We give it value but is it more valuable than people? Beyond money and real estate there are things that are good for a community,” he said.

As of midnight on April 30th all trace of the Freakshow had to go.

“If they can root us out they can change the whole way this place grows,” Ray said encouraging neighbors to “speak up from now on when they see something happening like this in their community. When they see them trying to change the vibe like they are, they should speak up and they should be loud about it. Because we tried to defend ourselves against them and it was impossible.”

Ray said it was important to understand the value of what the Freakshow represented. Explaining that when people visited the Freakshow, and he’d hear them say they felt sorry for the two-headed turtle  “I tell them the turtle feels sorry for them, ‘it’s very hard that you have one head’ I say, flip it around.”

From challenging “normal,” to changing someone’s view on how life might be with two heads, the Freakshow may have to stop shows in Venice, but Ray will never stop encouraging people to consider perspective.

“It’s all perspective,” he said. “Even the way these business people are. They’re men who grew up thinking money was more important than people. It’s all perspective. Maybe they’d do a little better if they came and took a look at a two-headed turtle.”