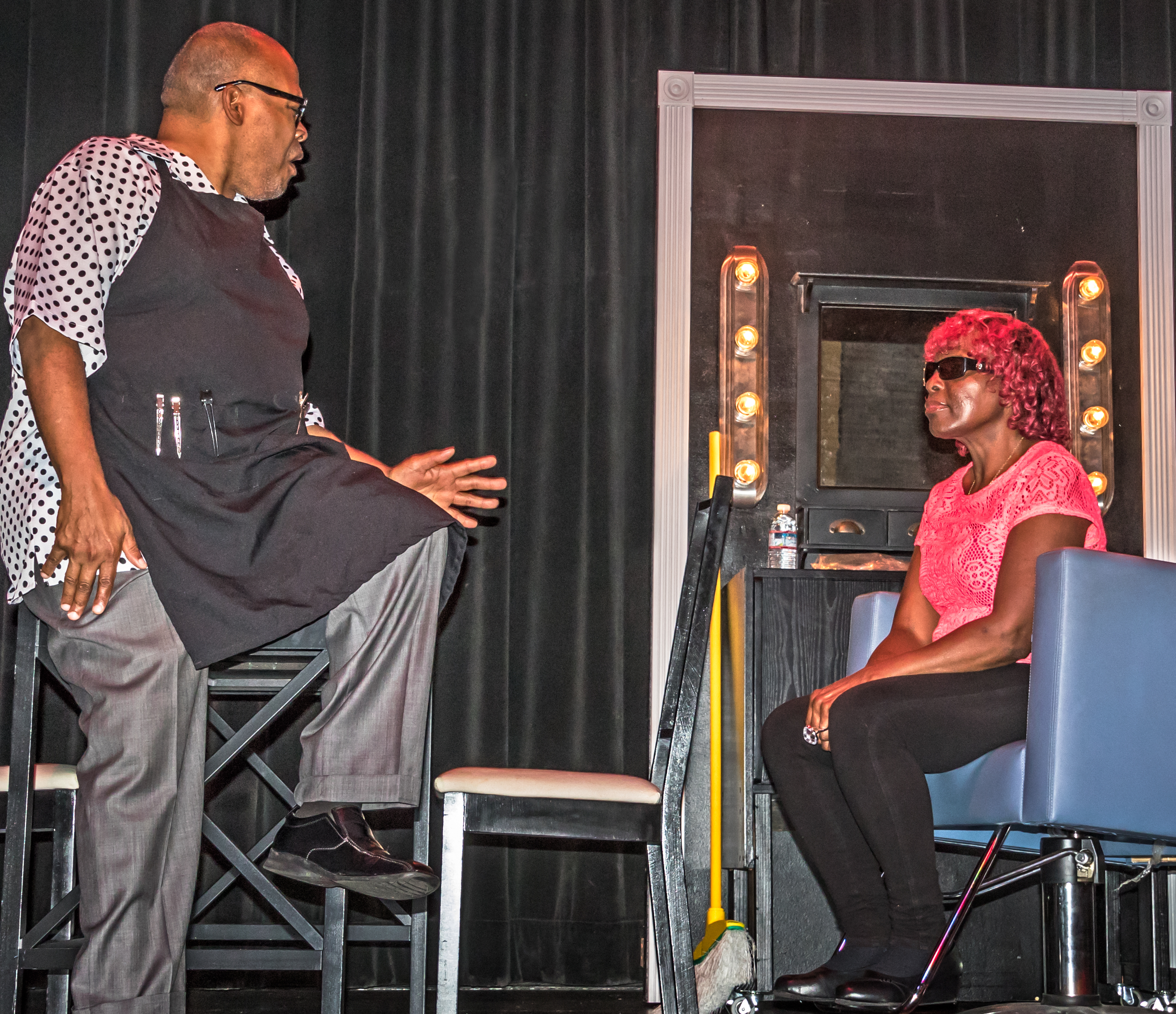 “A Reason to Love” at Magicopolis in Santa Monica is a Theater production with a great deal of heart. It is truly changing lives and making a difference, especially on the opening night Gala on October 20th, which raised thousands of dollars to support the two joint organizations producing the show: Theatre by the Blind, and Rex and Friends, which both assist individuals challenged by special needs, not accepting their handicaps as disabilities preventing their dreams.

The ticket price for this performance has a triple value. First the performance consists of practically two different shows interwoven. There is “Theater by the Blind” which tells the story of “Kitty’s and Curls,” a hair salon, and its employees and customers. It is a heartfelt tale of family and love and acceptance. There is a father and barber, Blake (Kenny Lee) and his two sons Scott and Sam (David Sandoval and Julio Hoyos). The cast includes blind receptionist Betsy (Leela Kazerouni), a transvestite manicurist Tammy (Connor Head), her un-accepting mother Peggy (Willie Ruth “Cookie” Cook), a friendly cop Sabrina (Melanie Hernandez), a customer with a fetish for Yoga named Jeremiah (Arnett Coates) Blake’s sister Tiffany (Sheila Waler) and her dance partner fiance Joe (Ernest Pipoly), to whom who may or may not get married.

According to director Greg Shane and Writer Pelita Dalalla Feldman, the stage play, written by Feldman, grew from a joint effort between writer, director and the improvisation and personalities of the performers.

In between each change in scene the audience is entertained by commentator McKinely (Mathew Saracho) and the musicians Rex and Friends. Saracho acts as a narrator and guide into the “Kitty’s and Curls” and a source for deep and witty observation. Rex and Friends inspires the audience to heartfelt heights with inspiring modern tunes, like “Bridge Over Troubled Waters” and “Fight Song.” Rex and Friends consists of two pianists and seven vocalists. Rex Lewis-Clack leads this incredibly powerful group of songsters. Second pianist Laywood Blocker plays in duet with Rex, accompanying singers Alan Davis, August, McAdoo, Brendan Montegue, Jonetta Ward, Patrick Storey, and Igor Zaninovich.

tickets assists these nineteenperformers be seen and heard, who might otherwise not have the opportunity. These tickets change lives. The members of “Theatre by the Blind,” due to sight issues, might otherwise never cross a stage let alone perform on one. Rex and Friends consists of performers who work to overcome being blind or autistic.

The cast in “Kitty’s” ranges from Kenny Lee, whose background is professional acting, but is losing his sight due to a brain tumor, to Connor Head who was born blind and performs as a musician and comedian in addition to his performance in this show. Some of the performers not only have overcome their sight issues but confidence and speech issues as well asa result of this performance. Ernest Pipoly lost his sight at fifty, yet credits the theater for helping him with a stutter problem.

Founder Rex Lewis-Clack is indicative the genius of Rex and Friends, having been born blind and diagnosed with autism as a toddler, and labeled a musical genius at age seven. This genius permeates the performances of the group. Several of the singers suffer from Asperger’s Syndrome. All eight performers perform professionally, not only as musicians but in the cases of most members of the group as professional actors as well. For audience members, it’s easy to forget that these eight performers suffer from setbacks, and instead the audience is invited to embrace their extraordinary musical craftsmanship.

The show will continue until November 3rd at Magicopolis, located at1418 4th street. Tickets are available through Eventbrite, Groupon or Goldstar.

Donations can be made by mail to CRE Outreach/Rex & Friends, 11777 San Vincente Blvd, Suite 500, Los Angeles, CA 90049 or online. Any online donations will go to the organizations individually unless specified to go to this joint effort.

All photos by Lynn Shane.