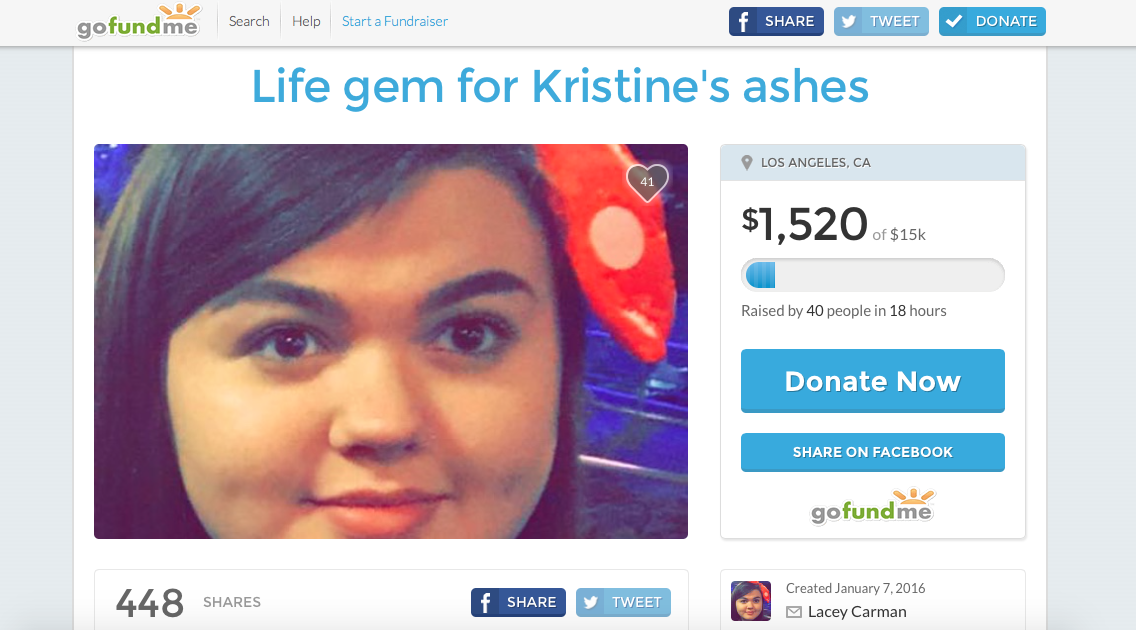 Kristine Carman was shot to death in the parking lot near Jerry’s Deli in Marina del Rey on Wednesday night. As homicide detectives continue to search for the man reported to have gunned down the 17-year-old, her grieving sister has begun a campaign on gofundme.com  hoping to raise enough money to turn her sister’s ashes into a precious gem stone.

From Houston Texas, Carman was visiting her sister, Lacey Carman of Marina del Rey.  She was shot in the head while sitting in an SUV in the parking lot of the Villa Marina Marketplace mall at Mindanao Way and Glencoe Avenue about 8 p.m. Wednesday, according to the Los Angeles Police Department.

Carman’s sister Lacey wrote on Facebook that Kristine was her sister. Saying she was the one driving the SUV and that “my sister was just murdered in front of me in a robbery gone wrong.” She wrote that her sister was, “beautiful, smart, and undeserving” of the tragic death continuing to write, “I pray that God is real and holding my sisters hand right now. I pray that you never have to feel this pain or this self loathing.”

The  gofundme account was set up on Thursday by Lacey Carman. On the campaign page it says that Carman was the second oldest from a family of 6 and that, “she carried the wind in her step and the sun in her smile. As you can imagine we aren’t ready to let her go and be without her presence. I create this in hopes we can all keep her with us everyday immortalized in a precious gem.”

Life Gem and Cremation Services are both examples of companies that offer to turn the ashes of deceased loved ones into precious gemstones. Cremation services writes on it’s website that gemstones from ashes are, “a unique way to rember the life of a special loved one,” explaining the process here.

The suspect  remains at large, he is described as wearing a gray hooded sweatshirt and a blue beanie, according to the LAPD. He fled the location in a dark SUV, possibly heading toward the Marina (90) Freeway, police said.