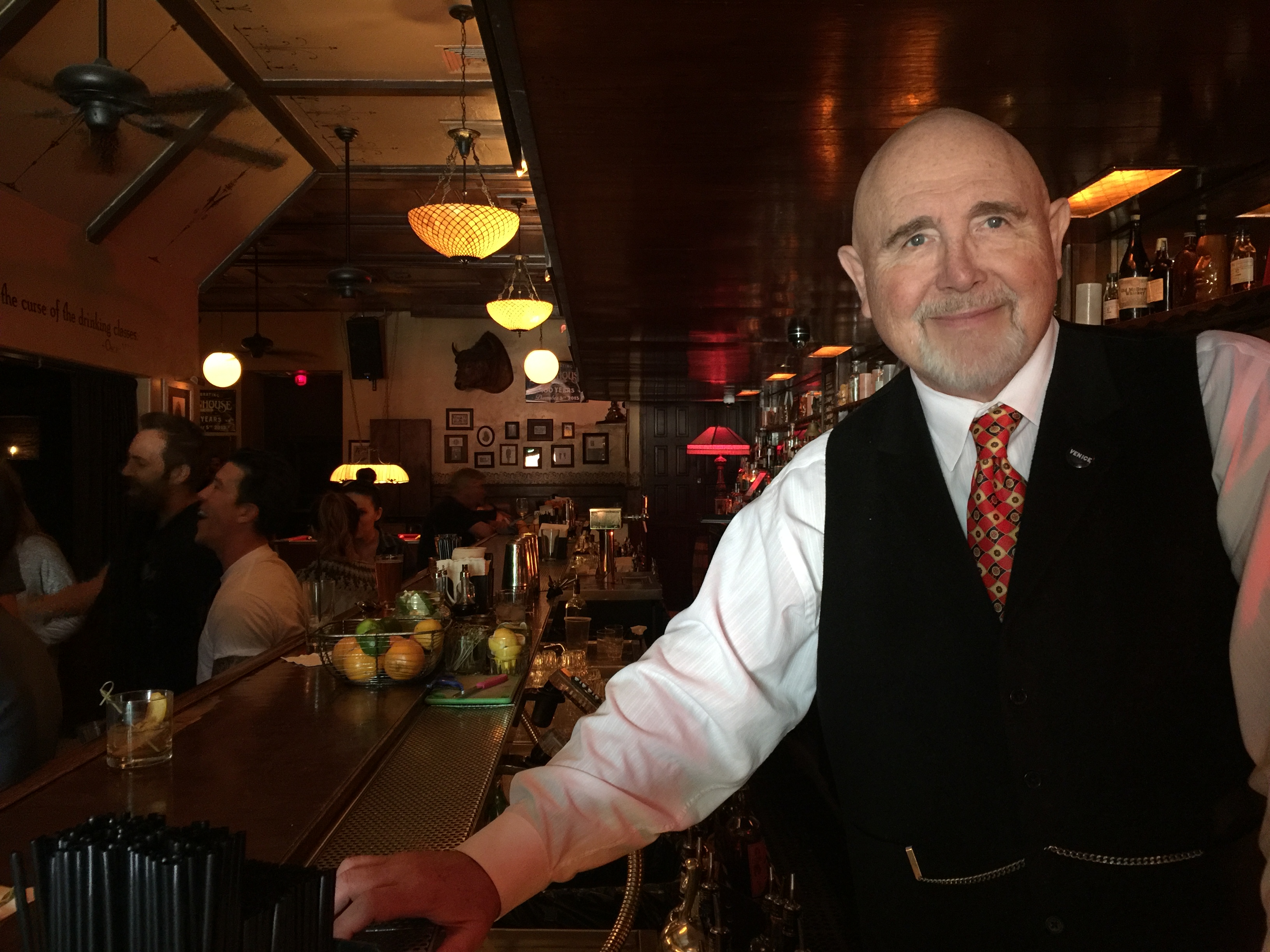 ABOVE: George Czarnecki the bartender is the longest running employee at Townhouse having worked for two of the establishment’s three owners.

It is almost as old as Venice itself, a constant that has outlasted most of the canals, survived prohibition, and holds a million secrets within its 100-year-old walls. Townhouse is one of the oldest bars in Los Angeles, certainly the oldest in Venice.

Italian immigrant Cesar Menotti opened the bar in 1915 after buying a vacant lot that had been earmarked for a saloon, off Abbot Kinney. The original tiles still lay at the threshold spelling out the establishment’s initial name, Menotti’s Buffet.

The building has changed hands only three times in the past 100 years; Louie and Netty Ryan are the third owners. Having saved it from a coffee giant takeover, they have overseen a restoration that honors the bar’s history and brings it back to a former glory.

“It’s like somebody has given you an antique battleship and you get to restore it and keep it in shape until you hand it onto whoever the next lucky person is,” he says.

Next door to Townhouse is Menotti’s Coffee Stop, which is also owned by the Ryans, and is named so to honor Menotti, the man from where it all began.

Menotti was only able to run his bar and buffet for five years before prohibition kicked in. For 13 years the saloon was forced underground.

Now, below a trapdoor, a staircase leads down to the Del Monte Speakeasy. However this staircase was not part of the original setup.
“There was no stairwell downstairs; there was a man operated lift that got you up and down via a pulley system and they often got tipped off when the police were coming, because the police and politicians were down there too,” says Ryan.

During prohibition, with the production and sale of alcohol banned in the United States, Canadian Whisky boats traveled down from the north to supply demand and Venice became a convenient port.

“There was a three mile limit off-shore,” says Ryan. “They waited off-shore until it got a little darker, they’d send in smaller boats, and everything came into the Del Monte Speakeasy through what were actually utility tunnels designed by Abbot Kinney. If you owned a bar across the street or a hotel on the Boardwalk you came to get your alcohol here during prohibition to stock your illegal cellar under your hotel.”

“The way you got your liquor back then in Venice Beach was that you came to Menotti’s because there was a series of tunnels that led both from the beach and from different restaurants and bars across the street,” says Ryan.

The series of connected underground tunnels ran throughout Venice and beyond.

“I’ve heard that there was one that led all the way to Downtown, to King Eddy’s Saloon,” says Ryan.

In a back room of the Del Monte Speakeasy, a wooden door covers the now cemented in entrance to the original tunnel. Two doors down at Animal House another cemented in tunnel entrance lays at the clothing store’s front door, a remnant of the historic network of tunnels.

Townhouse is steeped in as much history as alcohol has seeped into the bar’s smooth worn, wooden countertop. Original California murals from the early 1900’s still line the walls of the downstairs speakeasy. In one, a farmer with a mule looks out, if only he could tell us all that he stood silent witness to over the years.

George Czarnecki the bartender is the longest running employee at Townhouse having worked for two of the establishment’s three owners. As he stands behind the bar you feel as if you’re stepping back in time. Wearing black trousers, a white shirt, red tie, and a waistcoat. At Townhouse he is an institution.

“When I walked in that door 21 years ago I took one look, I saw no ferns, and I saw no blenders, and I said, ‘Aha, this is where old bartenders go when they die.’ It’s true, this is the elephant’s graveyard I love it here. The bar has been good to me,” says George.
The Ryans have lived in Venice for 23 years.

“I used to come here when it was a real dive-bar and listen to all George’s stories, and just look at the bones of it and think whoever gets his hands on this one day will be lucky, never thinking it would be us. It’s quite an honor,” says Louie.

By all counts George is a gentleman however, perhaps for dramatic effect, he will pepper his stories with well-chosen profanities.

“We came very, very close to losing it about 10 years ago and Louie Ryan stepped in and saved this bar,” George says. “Now, I get a lot of my old timers who come in and start to complain to me. I know part of my job is to listen to people whine and snivel and gripe and they’ll start their story, ‘Goddamn it George, I liked it better in the old days when you could bring your dog and your gun in here and we could smoke and there weren’t so many f–kin’ yuppies, and your prices were cheaper,’ and I’ll listen to that for a while but then I have to draw a line and say, ‘you know there’s some of the old days I miss too but there’s a hell of a lot of ‘em I don’t. I want you to think of one thing. If it wasn’t for Louie Ryan, we’d all be sipping Starbucks here right now. So you just rock back on your stools and let me tend a little bar and you boys enjoy a nice cup of shut-the-f–k-up.’ I was here when the deal went down. Those blowhards weren’t.”

As Venice continues to evolve, the Ryans say honoring the past is now more important than ever, “to preserve the history and show what an old saloon and an original speakeasy felt like and looked like 100 years ago.”

Townhouse & Del Monte Speakeasy music director Carlos Niño says that the music program is such that it honors the history as well.
“We have bands that play music that span the entire 100 years that the place has been around,” Niño says.

The Del Monte Speakeasy stage has hosted live performances from renowned acts such as Ben Harper, Bilal, Talib Kweli, and Miguel.
“One of the shows that put the room on the map once we reopened was a secret show we did with Feist before the release of her last album,” says Niño.

Niño says they haven’t had to look far for talent.

“There’s a lot of people who live in Venice but don’t play in Venice and we entice them from time to time because we’re one of the few real venues with the ability to deal with them on a technical level, and then there’s all the history that people really enjoy,” Niño says. “A lot of people that come to Townhouse and the Del Monte Speakeasy come for the drinks and then decide they want to play here.”

Singer Miguel is an example of someone who did just this, “you could say he went from being a regular at the upstairs bar to actually wanting to perform downstairs,” says Niño.

Local Aaron Potratz says the bar’s history is part of what makes it a favorite for him and his group of friends, “this place is iconic, it’s a magical place. Hands down the best bar in L.A. We love it here.”

Townhouse is like a second home for Potratz and his friends. The group line the bar, each one of them has either lived in Venice at one time or another, or are still locals but no matter how far any of them move from Venice, Townhouse will always be the one place they can all find each other.

“Whatever happens in the real world we all know we can fall back on this. It’s the one constant in our lives, that we can all meet here,” says Potratz.

As constant as history itself and the feeling is that Townhouse might just be around for another 100 years yet.