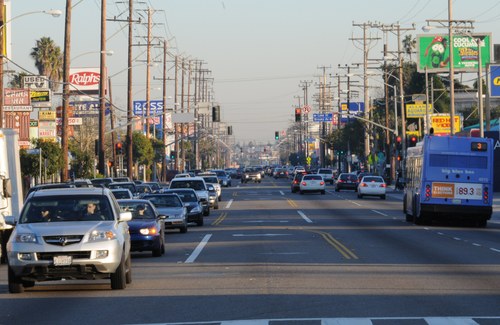 Obviously, with respect to development, there is a lot going on in Venice these days.  Over the past several years we have seen Abbot Kinney Boulevard transform from our sleepy “Main Street” of sorts, to what GQ Magazine called, for better or for worse, “The Coolest Block In America.” Rose Avenue doesn’t seem to be far behind, and many would like to see Ocean Front Walk added to the discussion.

And of course, as a result, square foot prices to buy or lease have risen commensurately. Whether you tend to think this trend is a good or bad thing, or maybe somewhere in between, we all know that the next thread in the discussion is Lincoln Boulevard.

However, Lincoln is clearly not Abbot Kinney, Rose or Ocean Front Walk. Lincoln is massive, not only in length, essentially spanning from Santa Monica to Westchester, but it also serves as one of LA’s de facto North-South “highways” – alongside the likes of Crenshaw, La Cienega, Fairfax, La Brea, Vermont and Western.

As a practical matter, it’s hard to imagine how anyone, except locals, would get North and South anywhere near the coast without Lincoln. Yet, to those who live in Venice, Lincoln is more often than not thought of as a street in dire need of landscaping, maintenance, increased walkability, architectural beautification, and traffic controls.

Of course, there are establishments, and even small blocks these days, that defy this generalization. Indeed, many Venetians have been working for years to improve Lincoln, and with some notable success. But, overall, most would agree that Lincoln needs more help, beyond the current “Lincoln Boulevard Community Design Overlay District” and fast.

Here’s the problem, what should Lincoln be? Let’s start with walkability. Lincoln has sidewalks, at least through Venice, which is a good start. But, real walkability on streets like Lincoln requires landscaping, and lots of it. Immediately planting trees – several to a block – would immediately make Lincoln a more walkable, and attractive, destination.

Likewise, we need to landscape the center median; just as Culver City has done with Washington Blvd., which is essentially its Lincoln. Culver City made this choice about five years ago, and as we all know, the results have been nothing short of miraculous with respect to walkability, and making Washington actually feel like it’s part of its adjacent neighborhoods.

Likewise, on such a busy street, we should consider adding unique and artistic pedestrian bridges over Lincoln. Such bridges are imminently safer than, and complimentary to, cross-walks, and would add an excellent aesthetic to a community known for its canals.

Next, we need to decide what sort of establishments we want to see on Lincoln. The good news is that Lincoln’s weakness, its size, can also be its strength. While there is no real way to guarantee a certain mix of businesses, or residences, I would suggest that we aim to make Lincoln as diverse as Venice itself.

There is a lot of debate about the appropriateness of new hotels in different parts of Venice East or West of Lincoln.  However, in a tourist town where we are very short on hotel rooms, and there has been a big backlash against vacation rentals, Lincoln could be an excellent location for a few new, though appropriately scaled, hotels.

Likewise, in a town that is rapidly losing affordable housing, Lincoln would be a great candidate for mixed use developments that provide true affordable housing options for Venetians. As part of these mixed use developments, parking garages and structures could easily be integrated, with frequent shuttle services bringing visitors, and residents to and from Ocean Front Walk, Abbot Kinney, Rose and other areas of Venice.

Moreover, for anyone who has ever visited Loyola Marymount’s campus, the roofs of such developments or parking structures could be, and should be, park space. It’s easy to imagine 6-8 rooftop parks up and down Lincoln for our community to enjoy.

With respect to dining, many good restaurants already exist in Lincoln, but on a street so large, surely new concepts would be welcome.

Finally, as a musician, I would love to see Lincoln become a destination for music.  There is Tripp, and there was Witz End, Air Conditioned, and briefly jazz at the Red Garter. But, wouldn’t it be great if Lincoln, like Crenshaw, became a true destination to see great music?

As always, the Devil’s in the details, and uncontrolled boom seldom has positive results.  But, if we could all get on the same page, and thoughtfully improve Lincoln, we could add a very special element to Venice for generations to come.

Mike Newhouse is a 19-year resident of Venice, an attorney, and President of the Venice Neighborhood Council.