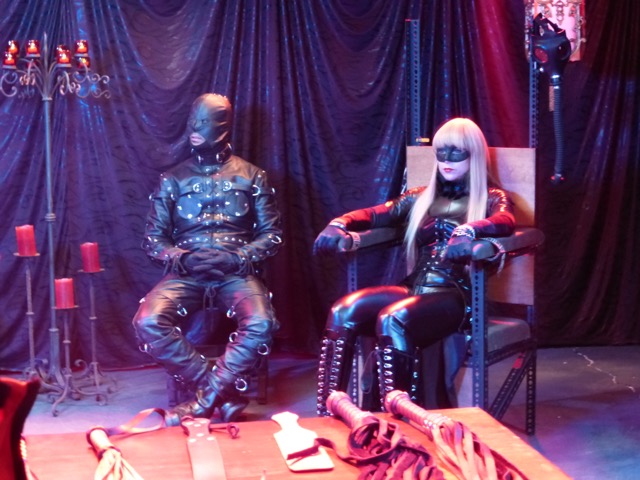 ABOVE: Ryun Yu and Paige Davis star in ‘Bondage.’

Esquire Jauchem is an Abbot Kinney resident. Jauchem has worked for 40 years in various ways in the theatre arts community, from operas and plays to even founding his own theatre company, Boston Repertory Theatre. He founded Jauchem and Meeh Special Effects when he moved to New York, which helps create explosions, magic, storms, and illusions on stage.

Jauchem also became involved with directing or producing a plethora of episodes of television for various television shows, including ones featured on NBC and E! Entertainment.

A premiere was held Sunday at Mann’s Chinese Theater in Hollywood.

Characters act as a “nameless everyman,” Jauchem says, so it is easier to make a connection with the characters.

Writing the screenplay was a fairly straightforward process for Jauchem. He was hired to write a tribute program. In order to successfully create this tribute program, Jauchem had to conduct an in-depth and extensive interview of Hwang. As Jauchem looked got to know Hwang, Jauchem looked for a movie to work on at the same time. Jauchem offered to write a movie adaptation for Hwang, and Hwang agreed. Jauchem had to study up on the structure of writing a screenplay to write it.

Since movie is an adaptation of a short story, Jauchem found that that made the writing aspect of the job straightforward. Jauchem added a character in the form of a cat, and in the form of the owner of the bondage parlor’s eyes, watching over the characters in some scenes.  In the end, most of the changes Hwang had in mind were minor, mostly with regards to the length of the piece

Research for understanding the intricacies of bondage to represent it accurately and sympathetically on screen was an important process for Jauchem. He had attended the art festival Burning Man, which helped with a basic understanding. Jauchem was approached two adult companies that were integral with research and providing correct props for the show. The two companies were Mr S, located in San Francisco, and the adult toy company Adam and Eve, who graciously provided plenty of props to use. A lot of the research Jauchem did seeped into the movie.

Although it would have been a joy to film in a real bondage parlor, the lack of a budget set out to film due to the high price. As a result, the movie was shot in a studio in Glendale. The movie was shot in a very quick succession after a mere twelve days of rehearsal. There wasn’t much controversy, and there were very few changes to create the final product.

The toughest part of creating the movie was one very specific scene. The male character is hung upside down. It took six people to maneuver him to make sure he didn’t fall or hurt himself.

“It’s based in a fantasy world, but based in reality. It’s the fantasy of the client,” Jauchem says of the cinematography. Borgman brought the sensibilities of a woman into this movie, to emphasize the importance of the woman’s role in this scenario.

“It was such a joy working with her, because she just got it. Like telepathy,” Jauchem says of  Borgman’s cinematography.

Follow the link to check out Esquire Jauchem’s site: http://www.esquirej.com.