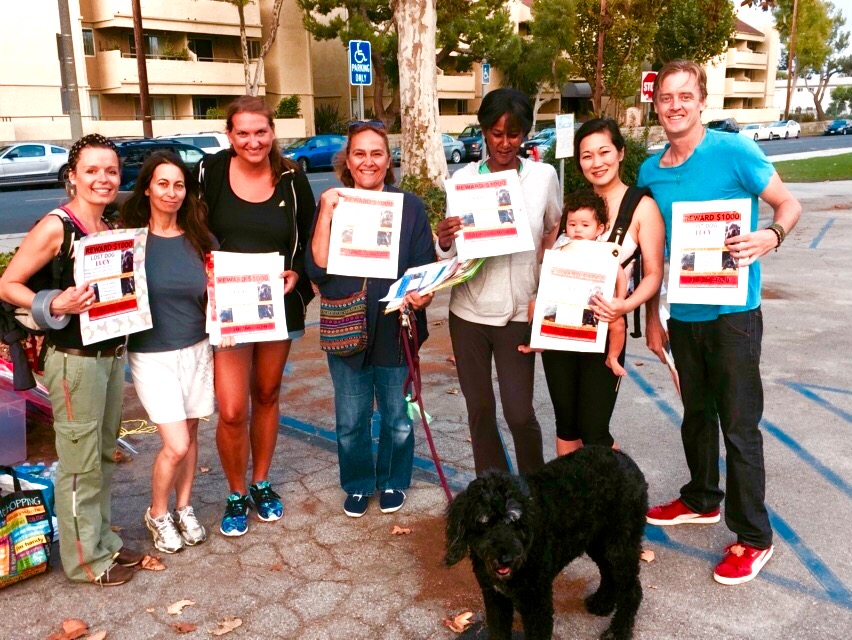 The posters are plastered on almost every signpost in Venice, teams of volunteers from across Los Angeles have hit the streets putting up more posters and posting flyers from West Hollywood to Santa
Monica, Culver City

to Venice Beach. Many on standby ready to hit the streets of the next suburb that reports a sighting of missing dog Lucy.

As word spreads Lucy’s parents Finn Egan and Antje Hinz hope that more people they have on the lookout for Lucy the closer they will get to having her come home.

Lucy ran away from her pet sitter 2 weeks ago while Egan and Hinz where away on holidays. Immediately cutting their trip short, Dr Hinz – the Medical Director at Westside Pet Clinc and her partner Egan jumped on the next plane back to Los Angeles.

“If it wasn’t such a sad experience for us it actually would be beautiful just because of the amount of support we’ve received. From friends, friends of friends, and strangers” says Hinz, a breast cancer survivor who credits her dog Lucy for helping her recover from her illness. All the more reason Hinz and Egan are so desperate to have Lucy come home.

People from across not just Los Angeles, but the world, have been pitching in. Scouring lost pet sites, doing anything they can to free up Hinz and Egan so they can dedicate all their time to hitting the streets of Los Angeles, chasing leads and looking for Lucy.

It is not just Hinz and Egan who are missing Lucy. Lucy, a registered therapy dog, works with Hinz at the clinic calming nervous dogs, “She is actually a helper. She’s my little assistant. Most animals are notoriously anxious when they come into the clinic. She greets every single one of them and they become more comfortable and lose their anxiety” says Hinz.

Because of Lucy’s quiet disposition Hinz wants to make it clear that she is worthless as a fighting dog, “She’s a lovebug, so she’s really not worth anything to anyone but us.”

Lucy is a blue pit-bull, “I always call her the ambassador for the pit-bull breed because that breed has such a negative reputation and she’s so friendly and so sweet. She’s like a poster-child for the breed. It just shows how they can be if they’re treated right.”

Lucy was originally a rescue, “She was incredibly skinny and debilitated and saturated with sadness. Just a poor little creature. So we new immediately, that’s our dog,” says Hinz.

Hinz worries that now she is missing Lucy may have reverted back to her timid ways and that this is making her all the more harder to find, “because she’s so incredibly timid and shy, there have been some sightings and people have tried to catch her which has resulted in her running away,” says Hinz.

Hinz asks that people don’t try and catch Lucy but instead contact her and Egan straight away on 310.266.4650. “We have people

stationed all through the city ready to respond quickly and that’s the best, possibly the only way to catch her,” says Hinz.

There is a $1000, no questions asked, reward for Lucy’s safe return. Hinz and Egan hope this will motivate people to continue to keep their eyes out for Lucy.

“We are heartbroken but yet we’re staying optimistic and positive, because that’s the only way we van do this we just have to believe that our efforts will pay off” says Hinz.