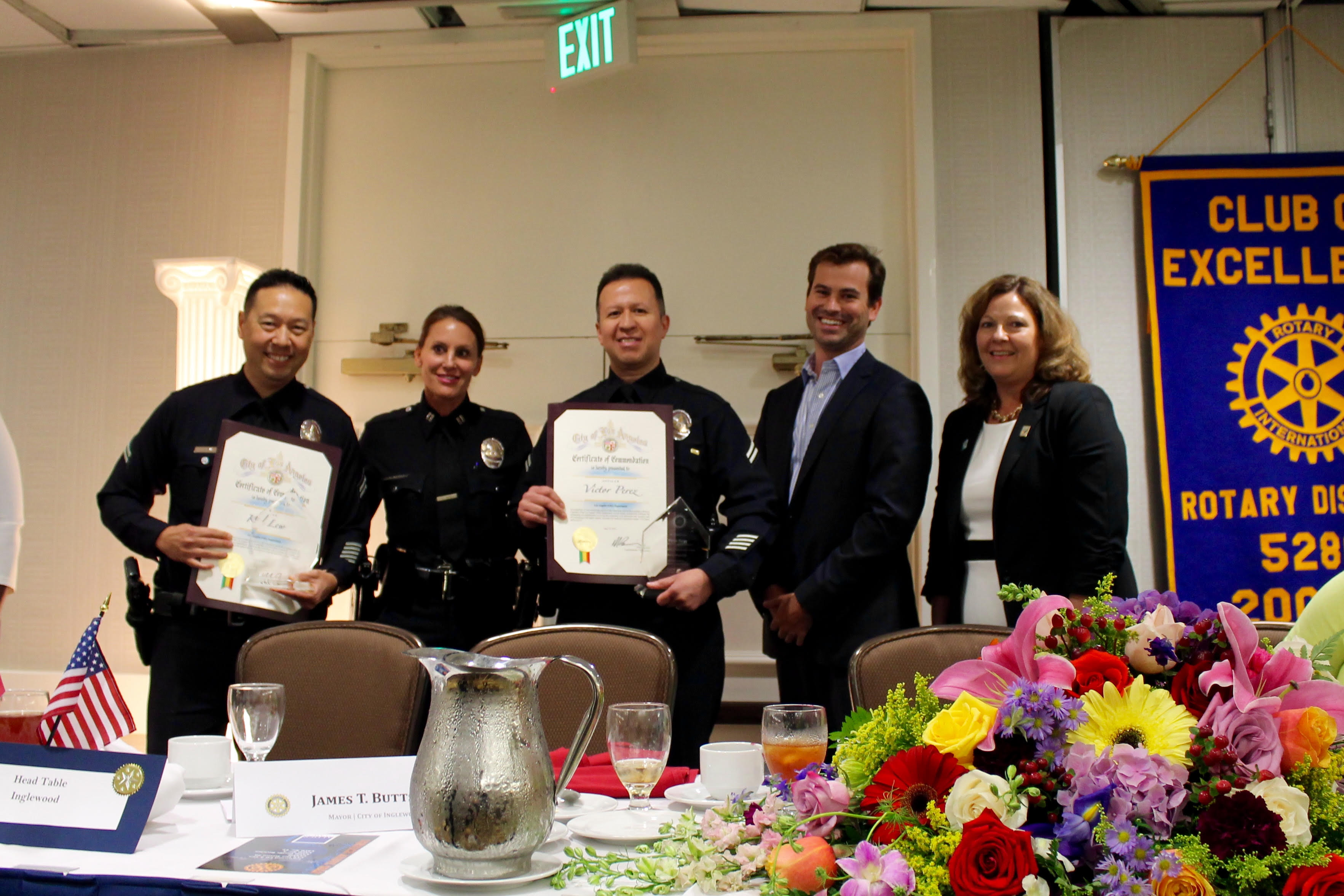 Above: The Rotary Club of Westchester along with Field Deputy to Councilmember Mike Bonin, Frederick Sutton (second from right), present an award to Badge of Heart. Officer Victor Perez (center) accepts an award as one of the two officers who braved a burning house to save a family. Captain Alberca stands next to Officer Ken Lew (far left).

Badge of Heart is a local Venice charity that sees the officers of the Los Angeles Police Department’s Pacific Division partnering with the Westside community to provide relief to those victimized by crime and family hardship.

The charity has been running for less than a year but already it has made a difference in many local lives.

Founder, the charismatic, Officer Ken Lew of LAPD Pacific Division, who regularly tweets as @LAPDKenLew, talks about the inspiration behind setting up Badge of Heart.

“In 25 years I’ve seen a good amount of bad,” he said. “Probably more bad than good because obviously, we all know that the police department, often sees the bad. I spent the first eight years of my career in south L.A., and then 11 years in downtown L.A. where I saw a lot of poverty. Single moms raising two, three, or four kids. We’d often see moms and dads working multiple jobs trying to provide for their family. Pretty much never home to see their kids because they’re working so much. So I thought throughout the years, wouldn’t it be pretty cool to try to make a difference in somebody’s life. About a year ago I came up with the idea to start a charity to do this.”

To begin with, even though he had the charity set up and ready to go, Lew wasn’t sure of the best way to help people. Then a tragedy struck and Lew knew he could step in and help ease the burden on the family affected.

“There was a house fire about a block and a half away from the Police Station three days before Christmas,” he said. “It was a family of five and their house caught on fire in the middle of the night. They were woken up by a couple of officers from Pacific Division. Their lives were saved and they went into safety housing. However, they lost everything inside their house, including their beloved birds, they lost everything.”

Arriving at work the next day, Lew heard about the tragedy during roll call.

“I found out they were a hard working, decent family who had just lost everything,” he said. “So I told my Captain, ‘Give me a few hours, let me try to see if I can do something.’ So the next thing you know I made some phone calls to the media and Channels 2, 5, 7 all responded and came down and did an interview with my Captain about the family.”

The media wanted to know how the general public might be able to help the family.

“My boss came up to me and said, ‘Ken, your idea was to help this family which is great but we can only take clothes and furniture. We can’t take any money.’ I asked, ‘What do we need to do that?’ She said, ‘Well we need some kind of non-profit who can take the money and get it to the family.’ I knew then and there that this was a way Badge of Heart could step up and help.”

While the LAPD has a policy that they can’t take money from the public, Badge of Heart was ready to go so Lew and LAPD Pacific Division ran with it.

“When the media aired the story, all the stations, at the end told people if they wanted to help the family they could go to BadgeofHeart.org and make a monetary donation,” Lew said. “Next thing I knew, Badge of Heart was in business.”

LAPD Pacific Division officers donated around $800 of their own money in a matter of three days.

“You know, it was before Christmas,” he said. “It was heartbreaking. The family was homeless living out of a shelter facility. Badge of Heart raised $2,500 all up, in three days, thanks to the media, the general public, and the officers.”

The following February there was another tragedy.

In south L.A. a father and son lost their lives trying to chase after a robbery suspect, after the family business got robbed.

Lew called 77th Street Police Station as he knew the Detective who was handling the case and wanted to see if Badge of Heart could do anything to help the family.

“Next thing you know I made some phone calls and they put me on TV again,” he said. “We raised an undisclosed amount of money for that family. We mailed them off a check because they didn’t want any publicity.”

While Badge of Heart has so far kept a relatively low profile Lew said slowly but surely they have been helping people here and there.
In March this year Lew decided to step it up.

“I said ‘You know what? I want to feed 500 families for Thanksgiving. I want to give a turkey, stuffing, potatoes, cranberry sauce, and dessert,’” Lew said.

Badge of Heart started campaigning in May and has so far raised half of the $15,000 needed to feed the 500 families.

Most of this money has come selling merchandise, T-shirts, and apparel through their online store, and fundraising within the LAPD.
Now they’re ready to reach out to the wider community, local businesses, and residents who are a part of the LAPD Pacific Division, from Palms to Mar Vista to Venice.

Lew hopes this year’s Turkey giveaway will set a precedent and be the first of many.

Ultimately he hopes Badge of Heart will be able to extend its reach beyond helping those in need within Pacific Division.
Helping the family in south L.A. was just one example of how the charity would be able to expand its reach more and more in the future.

For now though, the focus is on the Turkey Giveaway and with Thanksgiving only a few months away.

Lew said Badge of Heart is ready for locals to open their hearts to the cause.

“Everyday in Pacific Division we handle hundreds and hundreds of calls; these officers are going to peoples homes, their schools, they’re going to establishments where they see family hardship, victims of crime, and a lot of these officers have actually reached into their own pockets to help these people,” he said. “How do I know this? Because I’ve done it myself and I’ve seen other officers do it. That doesn’t get noticed out in the public. You often only see the bad side of us but there’s a lot of good that we do that’s not talked about or seen and I am here to let the public know that this is what we do.”
Lew said a lot of the time these good deeds go unnoticed out of respect for those the officers help.

“In my 25 years of being an officer I have paid for people’s meals, I have bought them clothes, I have got them groceries and I have seen other officers do this as well, but we don’t say anything. We just do it and that’s it, we leave. We don’t talk about it because it can be embarrassing for people that they can’t afford to feed their kids or buy new clothes.”

As a rule, Badge of Heart works along the lines of this model, giving quietly to those in the community who need it most. However, at a time of the year when being thankful is something that is shared Lew wants Badge of Heart to make some noise and make a difference, helping the community.

To give and help feed a family a Turkey dinner this Thanksgiving, go to BadgeofHeart.org and help support a great local charity.