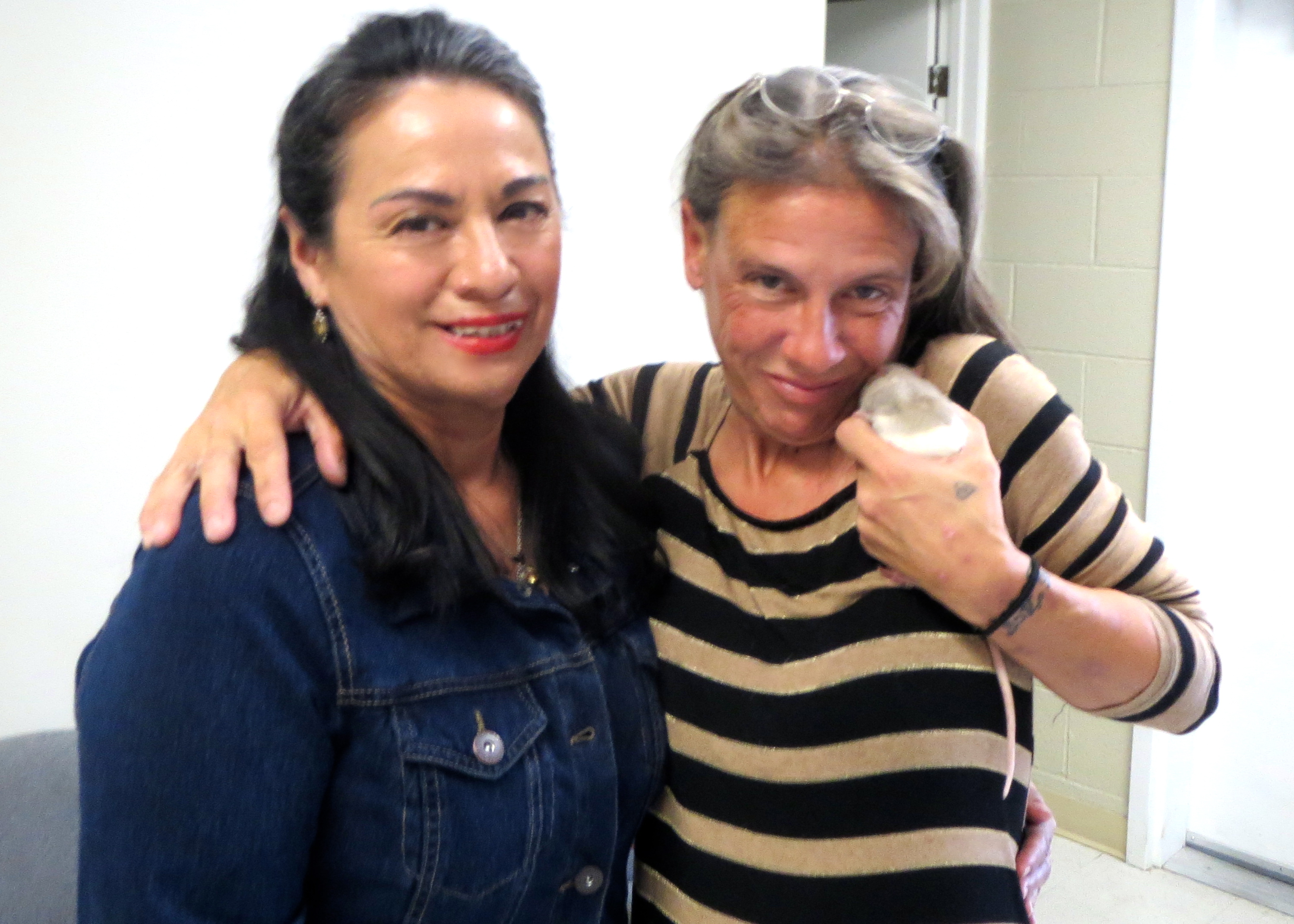 Above: After living on the Venice Boardwalk for three and a half years, former drug addict Carol (right) is now sober and living with her daughter out-of-state thanks to Four Square Church’s Pastor Regina Weller and the Venice Stakeholders Association.

The Venice Stakeholders Association has launched a drive to raise $20,000 to support the LAPD Homeless Task Force’s good work in helping those who genuinely want to leave the streets and return home or enter housing or rehab.

The VSA was recruited by former Pacific Division Commander Brian Johnson to fund the HTF and so far has donated $6,500 to support this program.

The HTF is an effective collaboration of the LAPD officers assigned to the Venice Beach Detail and the chaplains of the Four Square Church at Windward and Riviera.

Three afternoons a week the officers and chaplains visit those living on the streets of Venice and offer them hygiene kits, counseling, bus fares to return to family out-of-town, and in some instances the first month’s cost of housing or rehab.

Since the first of the year HTF has placed:

• 22 people returned home by Greyhound bus (all paid by VSA)

• Four people went into rehab (one paid by VSA)

The Task Force continues to identify candidates who want to return to family out-of- state or move into housing but HTF does not have the funds to pay for bus fares or rent.  The $20,000 budget will fund the program through the end of 2015.

We have approached the Mayor, Councilman Mike Bonin and County Supervisor Sheila Kuehl for funding but none have offered financial assistance to the HTF so the VSA is turning to the Venice community to support this very effective program.

As an example of the HTF’s success consider Jake, until recently a homeless alcoholic living on the streets of Venice for years. A regular around the Venice Pier, he was well known to many of the first responders in our area. During the past six months, police and fire personnel were called to Jake’s aid approximately 40 times, with 12 of those times involving transport by ambulance to the hospital. The last time the ambulance came for Jake, it was because he had suffered head trauma from being hit by a car.

After all these contacts with Jake and multiple offers to help him get off the street, Jake finally told the police that he was ready to enter a rehab treatment program and wanted to meet with the Four Square Church’s Chaplain Steve Weller, who had previously offered to place him in substance abuse rehab. Upon completion of a 30-day rehab program, Jake entered a sober residential house in Long Beach. He has put on 33 pounds, is actively attending AA recovery meetings and working with peer support specialists.

The savings in police, paramedic and hospital costs is easily in the hundreds of thousands of dollars, but the neither the City nor County, which realizes these savings, has donated to help the HTF place the next Jake in rehab.

Carol, an admitted crystal methamphetamine user, lived on the Venice Boardwalk for three and a half years. An LAPD Beach Detail Officer referred her to the HTF out of concern for her well-being. Over two months, Chaplain Weller spoke with Carol about her out-of-state family and more specifically about recovery and being reunited with her 10 year-old daughter. Carol told Weller that she was tired of the danger of living on the street and of sleeping on the ground, and that she missed her daughter terribly but she didn’t know where to start. Weller asked for her family’s phone number and got in touch with her mother, who said she was hopeful for Carol’s recovery and return.

With considerable coaching from Weller and his wife Regina, Carol consented to downsize her belongings, allowed the Wellers to adopt her pet rat, went with Weller to the Venice Family Clinic for a medical examination, and then entered the CLARE Recovery Program; Venice Stakeholders paid the initial rehab fee. That was in April; Carol has since moved out of state to be with her daughter, and is still sober.

Daryl had come out from Michigan in 2011 with the blessing of his family to attend college to advance his career as an artist. He fell short of his goals, went down the wrong path and ended up living on Ocean Front Walk at Park Avenue. Daryl was hard to miss, not only because of his large size, but because he always appeared to be agitated and wild-eyed. Not long after arriving in LA Daryl had experimented with “bath salts,” the latest designer drug on the market, and had become addicted. The symptoms of bath salt abuse are similar to those of cocaine or methamphetamine addiction.
Over five months Chaplain Weller was able to establish a positive relationship with Daryl. The Chaplain continuously encouraged sobriety. Daryl always declined.

However, on one early morning visit this spring, Daryl agreed to have breakfast with Weller and then responded favorably to the idea of changing his life and returning home.  He told Weller that he was very tired of life on the street and that he missed his family, especially his grandmother. Daryl gave Weller permission to contact his sister in Michigan to ensure family support upon his return. Daryl also had to clear up his seven warrants prior to leaving California, so he went to jail for one day. With those cleared up he was able to get permission from his probation officer to return to Michigan.
After 30 days clean from bath salts, Daryl was escorted by LAPD Beach Detail officers and Chaplain Weller to the bus station in Downtown L.A. The fare and a three-day meal ticket were provided by Venice Stakeholders Association. The day Daryl arrived home his grandmother called Weller to thank everyone that helped her grandson. Daryl is now working in his father’s business.

The LAPD Task Force is the most cost effective service helping the homeless in Venice today. The police officers are already here, frequently know the histories of the people who are living on the street, and through the Task Force are actively engaged in getting them off the street, re-uniting them with family or into housing. The chaplains donate their time.

A contribution to the VSA is tax deductible and the VSA assesses no administrative charges. The funds raised will only be spent on bus fares, meal tickets for use while in transit, and fees for first month’s rehab and/or rent.

Hotel Erwin and Carl Lambert, the owner of Venice Suites, have each donated $1,000 to launch the campaign. Only $18,000 to go.
Will you help? You can mail or drop off a check to Venice Stakeholders Association at 1615 Andalusia Avenue, Venice, CA  90291 or make a donation by PayPal through www.venicestakeholdersassociation.org.