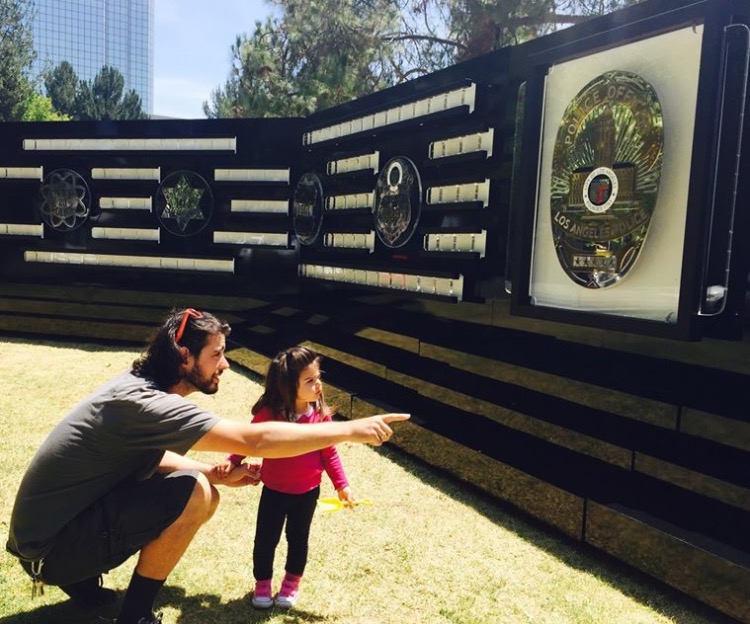 The Venice Boardwalk will be the temporary home to the Los Angeles Police Department’s traveling End of Watch Memorial Wall this Fourth of July Weekend starting today, becoming the 16th stop made by the wall since its unveiling in 2014.

Designed by retired Los Angeles Fire Department paramedic Timothy Lampros, the Memorial Wall is seven tons of steel, 59-feet wide and almost 10 feet tall, and is filled with thousands of LED lights that illuminate the wall at night.

The wall is emblazoned with the names of the 907 LAPD officers killed since 1907, as well as metalworks showing the evolution of the department’s badge.

Since its unveiling, the Memorial Wall has been visited and experienced by more than 1 million people.

The Wall is Lampros’ biggest project, but not his first piece of metallurgy.

“I did metalwork and metal art pieces as a hobby after retiring, and at one point a friend from the LAPD asked if I could make a memorial piece for the precinct,” Lampros said. “So I made this metal badge to hang on the wall.”

The badge was very well received, and Lampros found himself being asked by more people to make similar works. But when Lampros was contacted by Craig Lally, head of the Los Angeles Police Protective League to make a piece, he was tired of it.

“I did not want to make any more pieces that would only be seen by people going through buildings,” Lampros said. “I wanted to make something bigger, that could be seen and felt by more people.”
The Memorial Wall is the result of that.

The Wall comes to Venice at a controversial time, following the May shooting death of Brendon Glenn, a local homeless man, by LAPD Officers, and increased police presence on the boardwalk and beach.

Venice will also be the first time the Wall is displayed in an uncontrolled environment, though there will be a police presence at the location. According to Lampros, the wall is not meant to be a show of force, but rather a humanizing tribute.

“It starts a dialogue,” Lampros said. “I have talked to people looking at the wall who say they don’t like the LAPD but are moved by the ‘coolness’ of the statue. It is a terrible tragedy whenever something goes wrong and someone interacting with police is killed, but the police are people, and it’s a tough field.”

The End of Watch Memorial Wall will be unveiled at the boardwalk near Muscle Beach today July 3, and remain there until July 7.