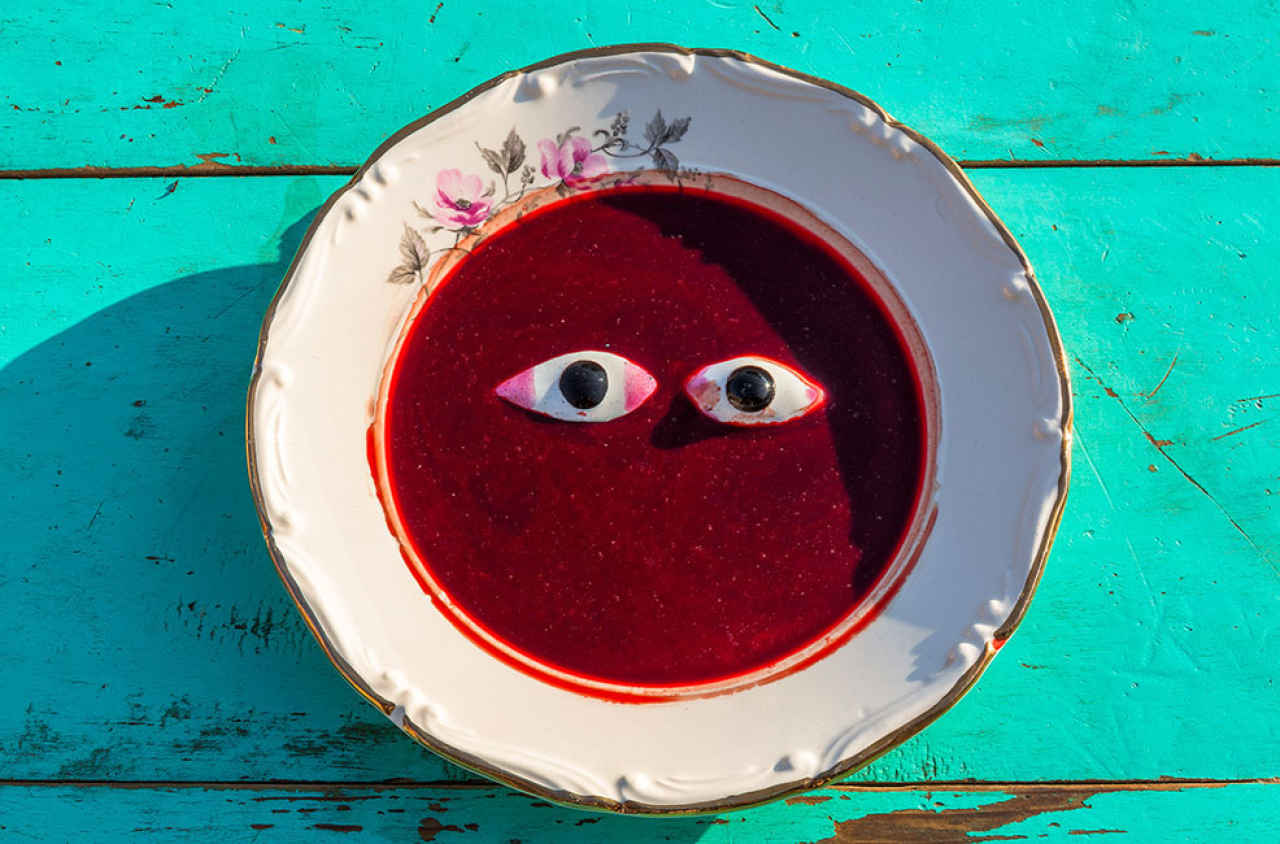 Growing up in Mexico, Trujillo nearly died of scarlet fever, leaving him with eye damage he has corrected with various procedures over many years. Because of his sickness, Trujillo was believed to be suffering from an affliction of the “Evil Eye,” a superstition rooted in Mexican culture that leads to misfortune.

“Mal de Ojo” – which runs through June 28 – is a collection of “fetishistic portrayals of the artist’s own physical and psychological trauma and tabletop arrangements of Mexican folk remedies and collections of personal amulets and totems.”

De Soto Gallery is located at 1350 Abbot Kinney Blvd., Venice. Regular gallery hours are Thursday through Sunday, noon to 5 pm, and by appointment. For more information, call 323.253.2255 or visit desotogallery.com.

Yo! Venice spoke to Trujillo about the exhibition:

How many pieces are in the exhibition?

There are 16 images in all of “Mal de Ojo.” Thirteen of the images are in the show plus an installation of self-portraits – I think as many as 30 at various sizes.

What makes “Mal de Ojo” unique compared to your other work?

I’ve had the images in my head for a very long time. The images look exactly as I envisioned. Unlike my “Flores” series which evolves as it goes along and my Niños, working with kids, which always involves an element of surprise, Mal de Ojo is all carefully planned still lifes.

When did you first begin work on the pieces featured in “Mal de Ojo?” How did you set about putting them together for an exhibition?

The project started in November of 2012 while I was at a residency in Varanasi, India when I found the evil eyes. In India, they use the eyes to make masks, like little Gods. It triggered memories of the surgeries I had to save my eye. I decided that I wanted to do a collage with these; I knew I wanted a layered image. I had a portrait of myself done at an old portrait studio, and had it hand-colored. The eyes hold down my portrait, like my own eyes held me down. It represents my childhood, not going blind, and having a visual career – a true self-portrait.

The exhibition was always in mind but, this January I drove gallery owner Shelley De Soto crazy with a million different ways to put it together.

Do you have a favorite piece in the exhibition?

The bananas! It’s the most vivid. It references artists that I love. It’s a homage to Irving Penn. Also, Andy Warhol.

How did your childhood sickness influence the works?

Most of the images are based on memories of being sick and the home remedies they used to heal me. These remedies worked for me. The proof is that I am still here. I lived. It’s not really about superstition. It’s about belief and intention. Superstition is everyday life where I come from. That’s just how things are done.

How else does Latin American popular and folk culture influence your work?

It’s my life. I live it. I live in Mexico and New York. I’m driving from Zacatecas to El Paso right now as we speak.

Was there anything specific that attracted you to Venice?

Shelley and I have been working together for 10 years. It’s interesting to be in Venice. There was a time when I almost made Venice my home. It almost feels like a homecoming.