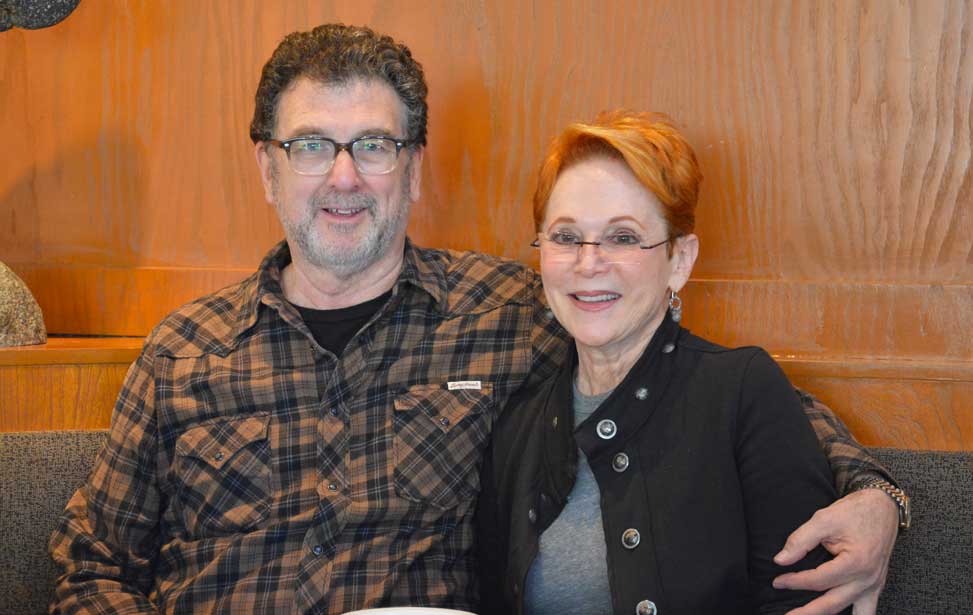 Don Novak (pictured above with his wife Linda) swims through the crowd. He’s a man in demand. Hands reach out to catch him as he passes. He smiles all the way, a welcoming host stopping here and there to place a warm hand on a shoulder or ask about a family member.

For the co-owner of Hal’s Bar & Grill, it’s taken all week for him to have a spare moment to talk to Yo! Venice in the lead-up to the restaurant’s April 26 closing, so another 15 minutes waiting for him to cross the room is nothing in the whole scheme of things. It’s certainly no time at all compared to the almost 30 years Hal’s has been a fixture on Abbot Kinney Blvd.

“We were the first white table cloth restaurant to come to Abbot Kinney and people thought we were insane,” Novak said, reminiscing about the early days of Hal’s on the eve of the restaurant’s final days at its current location. “They didn’t get it. Literally behind the restaurant guns would go off three to four hours a night, every night. We’d be ducking.”

Sunday, April 26, marked the end of an era. Hal’s Bar & Grill closed its doors for the last time at its 1349 Abbot Kinney Blvd. location. The restaurant squeezed in 600 reservations on its final day and asked people to not stay longer than two hours.

In the weeks leading up to the final countdown regulars made sure they got their fill.

Debra Padilla, Hal’s regular and Executive Director of SPARC, had stopped by four times in the last week alone.

“Hal’s is like the commons for Venice, you know? It’s represented that for 30 years. It’s our amped up version of Cheers…this is the last hurrah, to have the French fries, the Caesar salad, and the Hal’s Hamburger.”

Novak said he was “absolutely blown away” by the community outpouring during the lead-up to the closure.

“When we told people we were closing, they would say ‘Oh my God,’” Novak said. “We were talking in the office the other day joking, we should have said it every month, liquidation sale!

So where is Hal’s going?

“We’re going to try to open down the block, we’re almost there. Things are in motion. So, we’re staying on Abbot Kinney,” Novak said. “We’re also trying to open up in Playa Vista, a second Hal’s. We can’t talk about it because it’s all in the final stages of negotiation. I tried a year ago to make it that there was very little down time but there were so many moving parts to this, permits and things like that. I couldn’t co-ordinate it totally so it’ll take us two or three months to reopen here on Abbot Kinney and probably five or six months in Playa Vista.”

Novak said his wife Linda had been an integral part of the restaurant’s success.

“The first week she came in here, I said to her we’re going to loose a lot of money – you’re going to have to come in here and plug the hole in the dyke because we’re going to get killed if you don’t,” he said. “She really worked the restaurant the whole time. I was always off doing stuff. The last five or six years I haven’t been doing quite as much so I’ve been helping with the restaurant but Hal, who is an unbelievable partner, is a fabulous guy. Brilliant. He represents us. Linda’s sort of the back room. She’s putting the cash draws together for the day, she does all the interviews, she selects the people who work here. The truth why we have employees stay here 26 years or 30 years or 32 years is because of Linda. They love her because she has this endearing personality that is like…oh my God. She’s fabulous.

Because of the lag between the closing of the old Hal’s and the opening of the new location, Novak faces the issue of what to do in the downtime with a team of staff, who are more like family.
“We had the City of LA come in to talk to our staff to find placement for them for the short term,” he said. “We went to six restaurants in the area to absorb my guys in the downtime. James Beach, Sunny Spot, The Brig, Salt Air, and Danny’s Deli, they’re all helping me cover my guys in the short-term.”

While Novak has been able to turn to individual business owners in the Venice community for help during Hal’s transition, the question arises as to whether this sense of community is under threat as more and more, big business begins to seep in.

Property prices have increased across Venice and anyone buying commercial real estate along Abbot Kinney not only has to account for the high price of acquisition but also the substantial property tax increases that go along with that. In commercial real estate all costs are passed on to the renter, thus explaining the skyrocketing rents.
James Allan of Coldwell Banker said in the last year or two it would have cost around $7 a square foot to lease ground level retail or restaurant space.

“Now it’s more like $10 a square foot and in some cases even higher than that depending on which part of the street and the type of building space being offered,” Allan said.

As rents increase they become less and less affordable or justifiable for individual business owners.

Allan has been a Venice resident and realtor for 20 years. He said he noticed a direct correlation of rent prices rising after GQ Magazine crowned Abbot Kinney “the coolest block in America.”

There are brands wanting to align themselves with the Venice type of cool and they are willing to pay top dollar to do so, Allan said.
Some of the chains along the street are even prepared to have their Abbot Kinney stores run at a loss because overall it benefits the brand to be on the street, he said.

Venice local Elaine Spierer of imaginevenice.org is a retired realtor and property developer.

She still owns property on Abbot Kinney and chooses to keep her existing tenants in place, although she said she is hassled daily by real estate agents looking for a space to rent along the street.
“I had one realtor who called and said ‘I’m in the store now, when is it available? I have a New York client who wants it,’” Spierer said. “Rents are forcing out individuals and turning the street into a high end Beverly Center.”

In the song “Changes,” David Bowie sings “Turn and face the strange…” but could it be the changes Venice face are turning the town away from strange?

“They were filming the movie ‘Taps’ and Gregory Hines was in here four times a week. He would walk in here with Sammy Davis Jr., Aretha Franklin, and five other big  stars from the movie. They took out the tables, they put on music, and they danced in the middle of the room for 20 minutes. Nobody had a cell phone, nobody had a camera, we were just like blown away. There’s a whole batch of stories of people who come in and love Hal’s.”

Bountiful, another longtime fixture on the street at 1335 Abbot Kinney Blvd. will soon be shutting up shop.

Spierer tells a story of how one day back in the 80’s she noticed a limousine pull up in front of Bountiful.

“…out stepped Barbra Streisand and in she walked to the store,” Spierer said. “They’re killing the Golden Goose, taking the edginess off the street with corporations. It’s not going to be so cool much longer.”
Novak said he first fell in love with Venice all those years ago because it was quirky.
“It was lovely; people cared and it didn’t matter if you were a Democrat or a Republican. You had an opinion in Venice…and artists. This was a place where artists could live and work. That’s the sad part about it; they can’t afford to pay to stay here. If you’re a starving artist it doesn’t work in Venice. That’s the truth, but the people, the art that we have in this room, they’re all world famous now. Some of them I’d have to give credit to for a few months until they sold a piece. I think it was a creative community and the thought process that was alive.”

Novak has hope that the community of Venice, both new and old, will keep the town’s unique vibe alive.

As for the new Hal’s location, regular Padilla hopes it’ll have a new renaissance in a different place and a different way.

“I think that it can embrace the best of what Hal’s is but if you’re choosing to make a change after 30 years then you need to honor the change and what that represents for you and your business model,” she said. “But I think that given who Don and Hal and Linda are and certainly Manuel Mares the Executive Chef, you know, they would want to give us the best of what they are but maybe tweak it in another way.”