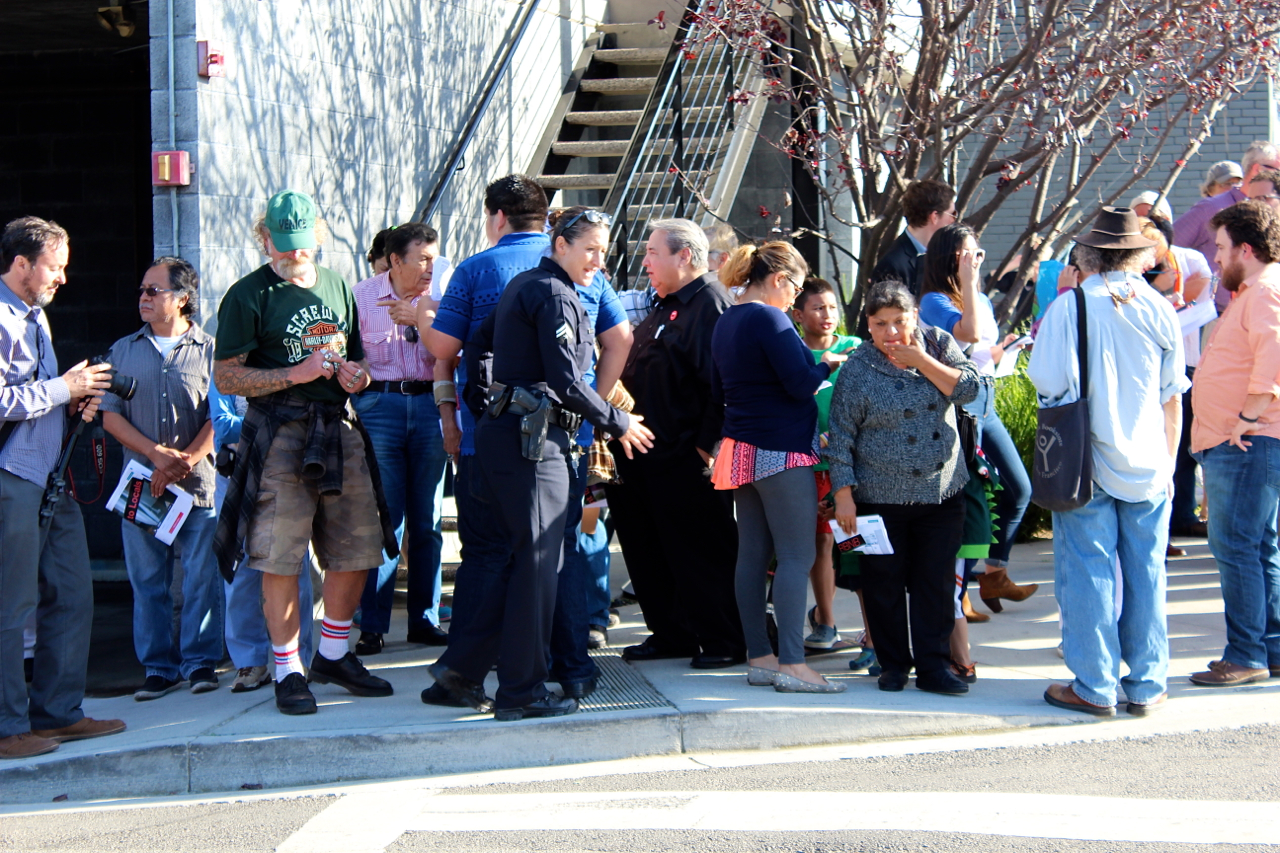 A maid’s cart trundles along a Venice walk street, wheels clattering while she calls “room service” a couple of times before stopping and pressing a security buzzer, squinting as she peers into the camera.

From inside someone buzzes a reply, “This is my home, go away, you have the wrong house.” With that, the maid wheels her squeaky cart away to another home.

This is the retelling of a true story where one Venice resident experienced her street so overrun with short-term holiday rentals that a maid service was literally wheeling a housekeeping cart up and down the walk street.

Venice is historically a tourist town. Once a deteriorating marshland transformed by Abbot Kinney’s vision for a “Coney Island of the Pacific.” You could say tourism is in this town’s DNA, but what does this mean for people who choose to live here full-time and with the sharing economy booming? Is the permanent Venice resident a species under threat?

On April 1 a group of more than 100 people took to the streets in a rally against the proliferation of short-term rentals throughout Venice. The crowd met at the intersection of Westminster and Electric avenues. From there, they marched down Electric Avenue to gather outside the headquarters of property management group Globe Homes and Condos.

The company, up until that day, was one of many professional property management groups using Airbnb to advertise their portfolio of short-term rentals. The day after the protest Airbnb removed all of Globe Homes listings from the site.

James Adams, Communications Director for Keep Neighborhoods First, explained that the short-term rental market is eating into the supply of affordable housing in Venice and taking away homes from people who want to be permanent residents “who want to live in Venice, people who add to the culture and add to the community.”
The crowd of protesters chanted, “What do we want? Venice Homes! When do we want it? Now!” while waving signs that read “UNFAIRBNB.”

The idea for Airbnb came in 2007. It was a solution to a problem. Unemployed and living in San Francisco, now CEO Brian Chesky saw an opportunity to make some money renting out an air mattress in his loft and providing breakfast to a few attendees of a large design conference that had come to town. There was a shortage of affordable hotel rooms, Chesky and his roommates accommodated three guests. AirBed & Breakfast, now Airbnb, was born.

So what is the new problem that has resulted from this sharing economy? Professional management companies and investors cashing in on an opportunity are converting entire blocks of units in Venice that would otherwise be long term housing and running them akin to hotels.

“It is a crisis, and it’s absolutely outrageous,” Bonin said. “What started as a sharing economy, a good way to visit somewhere – I use VRBO and Airbnb when I travel generally – has morphed into something else where we have a lot of commercial operators, real estate speculators, and de-facto hotels that are really ripping dozens and dozens, if not hundreds and hundreds of rental units out of our market and we have to stop that.”

Zumper released a rental report for March showing that the city-wide, median price for a one bedroom apartment was $1,730 a month while Venice had a much higher median price of $2,500, making it one of the top five most expensive places to rent in Los Angeles.

The report stated that 71 percent of hosts on their site say the income they earn from home sharing has helped them afford to stay in their homes.

So rent prices are going up and Airbnb is helping people pay for their high rents. Or is it?

A report published last month by the Los Angeles Alliance for a New Economy (LAANE) titled “Airbnb, Rising Rent and the Housing Crisis in Los Angeles” found a direct correlation between neighborhoods with rents well above the citywide average and those with a high density of Airbnb listings. The report found these neighborhoods boast an average rent 20 percent higher than the citywide average.

The LAANE report also found that since the beginning of 2013 rents in Airbnb’s top neighborhoods, of which Venice is one, have climbed 16 percent, as compared to a 12 percent growth in the citywide median rent over the same time period.

“You can’t compete with yourself on vacation,” said Venice resident Carlos Camara. “You spend more when you’re on vacation and you pay more for your holiday accommodation than you would pay for day-to-day rent.”

Liz owns a duplex in Venice. She runs both units as short-term rentals, living in whatever unit is not rented and moving out completely at times when both are being used.

“This is my business, I’m a single mom and this allows me to support my family,” she said, adding companies like Airbnb are great for tourists who want to live like a local.

But while these true home sharers become poster children for the brand, in reality it’s the professional management companies and single lessors who do not live on site that generate the most revenue.

The LAANE report calculated that 89 percent of Airbnb’s revenue comes from these types of lessors and professional management companies.

Bonin said the problem was bigger than Airbnb, explaining that the short term rental industry also includes other sites like VRBO, Home Away, and other companies that professionally manage vacation rentals. As a legislative remedy we need to make sure we look at the whole picture.”

While there is a push to legislate against the big commercial operations that commandeer chunks of the rental market there is still support for individuals who want to partake in true home sharing.

“Of course tourists should be able to come to Los Angeles and enjoy all of these wonderful neighborhoods, the fact that locals live here, the fact these places have a culture, the fact that you actually know your neighbors adds to the allure of these places it’s what creates the character,” he said. “We’re not talking about kicking tourists out, tourists are very welcome, what we’re talking about is preserving the very things they’re coming to see. We already have hotels, we have hostels, we have ways to accommodate the tourists and Airbnb, the way it’s presented as a home sharing service, can be a great way to do that.”

The Abbot Kinney Hotel development has been three years in the making and is still waiting approvals from the City’s planning department. There have been multiple public hearings yet while this development awaits approval entire residential blocks of units like the Waldorf Apartments at 5 Westminster Ave., Venice have become quasi hotels, without any public hearings or approvals.
The Warldorf’s website reads “…the hotel was once home to celebrities like Charlie Chaplin, Fatty Arbuckle and Clara Bow.” The issue is, it’s not a hotel. It has not been subject to the same approval process a hotel is forced to undertake.

Renting out residentially zoned units as tourist accommodation goes against land use regulation and zoning codes. It is illegal.
So how do homeowners, landlords, and professional management companies get around the law?

“There’s a loophole,” said one Venice resident who in the past has rented her apartment out short-term. “You make the guest sign a 30 day contract, but this doesn’t mean they are necessarily paying or staying for 30 days.”

This is not to say that all short-term rentals in Venice are exploiting this loophole. The Waldorf Apartments website reads: “Please note we do not take reservations for less than 30 days.”

“I think what’s pretty clear right now is that the current system is not working for anybody and we need to come up with a legislative package to fix it,” Bonin said.

Saying that his second priority “…has got to be the impact on residential neighborhoods. I think we have to look at, is there a saturation point that we need to legislate against? Do we want to say there’s certain neighborhoods where you shouldn’t be allowed to do it? Are there a certain number of weeks or months per year that you should be not allowed to go over? Or are there a certain number of units on a block that needs to be the cap in a given year?”
As a result of a motion submitted last December by Councilmen Bonin and Herb Wesson, the City’s chief administration officer and the planning department are about to release a report. Expected within the next week the report will frame the issues that need addressing, after which a series of listening sessions will be held around the city and from here new legislation crafted.

But as summer looms, could it be that the very people who come to experience what it is like to live like a local in Venice drive the market to push all the locals away? Can the City move forward fast enough to craft this new legislation before even more Venice streets turn into hotel corridors?

What are your thoughts? Email yo@yovenice.com if you have a Letter to the Editor you would like to see published in print.

You can now borrow a car on the Westside for less than the price of an electric scooter. Learn more...