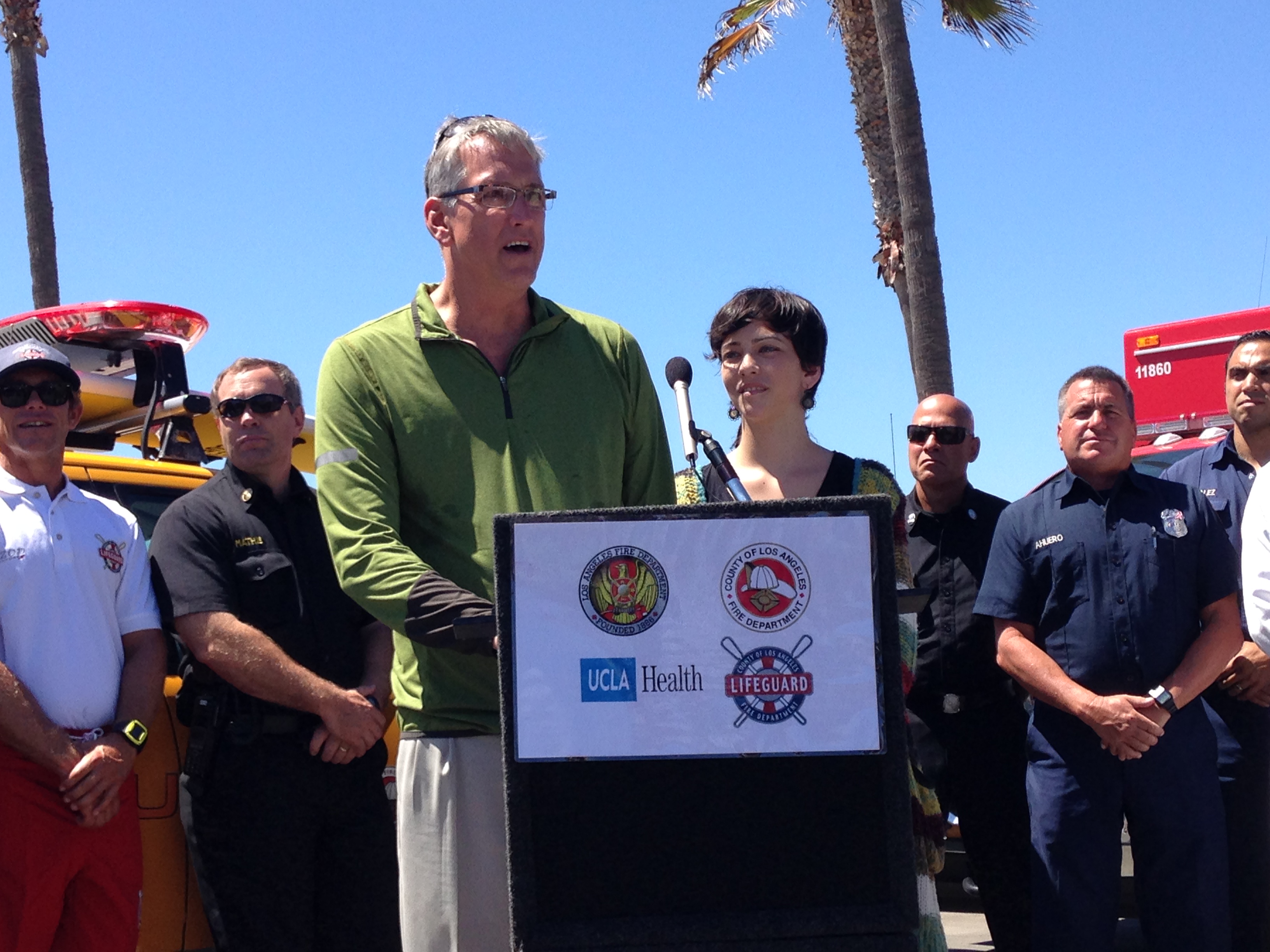 A press conference was held Thursday afternoon at Venice Beach to spotlight the tragedies that unfolded at the same location a month ago on July 27, when an unexpected summer storm hit the sands of Venice, caused tragic injuries, and dramatically shook up several lives, including 56-year-old Dr. Robert “Bob” Kilroy (pictured above with his daughter Emily), a professional chiropractor and seasoned lifeguard.

Kilroy, who was giving his 15-year-old daughter Emily surf lessons, was struck by lightning that day, suffering an electrocution and drowning at the same time.

Kilroy was reunited with his rescuers at the press conference, during which professional service providers to his teenage daughter all shared with the audience Kilroy’s story and the process of his rescue.

This elaboration revealed the absolute necessity of teamwork and focus — as well as a strong sense of selflessness — in the midst of an emergency disaster.

Ralph Terrazas, Fire Chief of the Los Angeles Fire Department, commended those who jumped into action that day.

“We are trained to expect the unexpected,” Terrazas said. “[That day was] certainly an example of that. [Our training] was put to good use that day. We are thrilled that we are standing together with [Dr. Robert Kilroy], who lives in the neighborhood and has worked as a seasonal lifeguard for the past 35 years.”

As a seasonal lifeguard, Kilroy had naturally been rescuing lives for years, but has now obtained a completely altered perspective on the immeasurable significance of the job.

He cited gratitude as one of the biggest lessons learned from the incident and provided some insight into how the role of teamwork plays into a rescue mission.

“Doctors and nurses have said that I’m a bit of a miracle,” Kilroy said. “But [the situation was] more of a series of miracles made possible by some of the most amazing people in their professions.”

Dr. Gil Cryer, the chief and director of UCLA Trauma/Emergency Surgery and Critical Care Program at Ronald Reagan UCLA Medical Center, put it best as he explained the importance of understanding that “everything that happens before the trauma has to go just right,” emphasizing the potent effects of human teamwork. Because Kilroy’s daughter Emily initially pulled her father’s body out of the water and called for help, lifeguards were able to immediately and effectively deliver CPR.

“There were great heroes all around, including the incredible personality and will of the patient himself,” Cryer said.

Kilroy highlighted his appreciation and awe toward his daughter, whose actions made the series of miracles possible.

“Before any of those miracles could’ve ever fallen into place, it all started with my 15-year-old who was down there with me, who got knocked out by the same lightning strike,” Kilroy said. “When she came to, she looked over to the water to see where her dad was […] and regardless of everything that had happened in that moment, she charged right back into the water.”

Los Angeles County Fire Department Lifeguard Chief Steve Moseley recounted his years of working with Kilroy as lifeguards. Moseley directly referenced teamwork and focus as two of the most important lessons he learned as a rookie lifeguard.

“Effective CPR is just one [step] in the chain of survival,” Moseley explained.

He went on to say that the lifeguards who saved Kilroy “responded flawlessly as a team” by maintaining a strong sense of focus.

Los Angeles County Fire Department Deputy Chief Luke Claus attributed the success of such rescues to teamwork as well, emphasizing how both city and county agencies “cooperate [and] work together [to] provide the best service for citizens no matter where they live in the county.”

In addition to uplifting Kilroy’s rescue story, Moseley gave the crowd the realistic reminder as a lifeguard chief the serious statistic that thousands of rescues are made per year. In lieu of the upcoming Labor Day weekend, Moseley also dropped a number of safety tips, including making sure to swim and surf in front of an open lifeguard tower.

Kilroy credited his successful recovery to the doctors and nurses at UCLA, the paramedics at station 63, his brother lifeguards, and of course, his daughter Emily.

Kilroy has made a full recovery since the incident and has returned to work and other everyday activities.

Three hospitalized in a fight involving a machete Monday night.    By Sam Catanzaro A stabbing occurred Monday night on Ocean...