A 23-year-old man has been arrested in the stabbing death of a Venice restaurant employee who was attacked in November after walking from work. 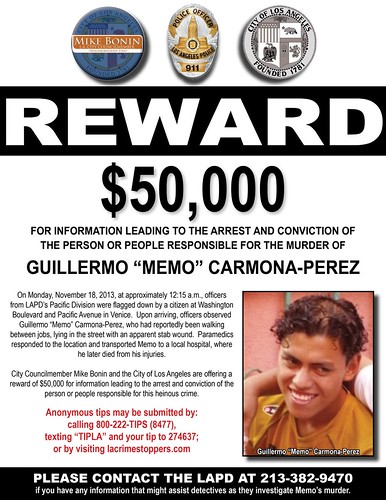 Jorge Nolasco, of Los Angeles, was arrested in connection with the slaying of Guillermo Carmona-Perez, according to the Los Angeles Police Department. Nolasco was booked Thursday on suspicion of murder.

Bond was set at $1 million.

The attack occurred Nov. 18 near Pacific Avenue and Washington Boulevard. The investigation included a $50,000 reward offer for information in the case, which stunned co-workers who described Carmona-Perez as a “stand-up family man.”

Carmona-Perez was walking from one of the kitchen jobs her worked in the Venice area when he was stabbed and left face-down to die in the street. He suffered stab wounds to the chest.

Nolasco’s next court date is scheduled for Jan. 23, according to jail records.

Los Angeles City Council recently approved a controversial housing project in Venice. Learn more in this video made possible by...