The Marine Contemporary Gallery will host an opening for Kelly Barrie’s “High and Dry” on Thursday, February 28th, from 6-8pm. This is Barrie’s first solo exhibition with the gallery. 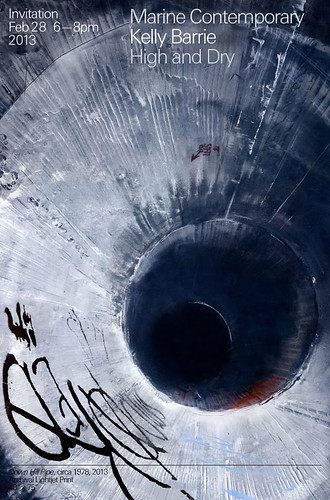 Barrie’s recent work is inspired by ephemeral, free-play sites such as the junkyard playgrounds of the sixties and seventies, including his latest investigation into the genesis of vertical skate culture and the locations that it occupied. 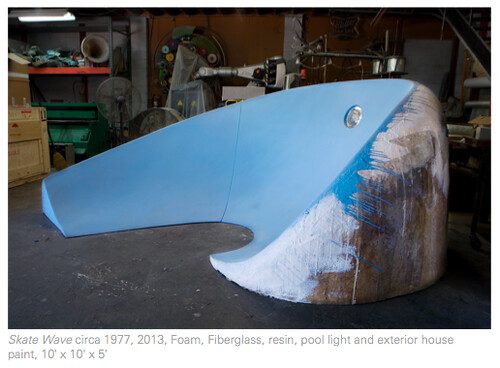 Although temporary, such improvised sites often become catalysts for larger social movements that inform our ideas about civil rights and what constitutes public space. The exhibition focuses on the California “Skate Wave” phenomenon of the mid 1970’s and the Central Arizona Project (CAP) of 1968.

A ten-foot fiberglass ramp, Skate Wave circa 1977, 2013 is the focal point of the exhibition. At first glance, the sculpture appears to be a partial section of a concrete pool, but then tapers off like a breaking ocean wave. Historically, improvisational objects such as this emerged out of a need to practice carving surf-like maneuvers on land during down times. It was also related to the activity of skating drained residential pools, which was the result of a statewide drought mandate to conserve water. “The Wave,” as it was originally called in the 1970’s is a unique hybrid that uses the traditional craft of surfboard making to recreate the vertical rise experience of skating pools. “The Wave” would often appear in a dead end beach parking lot, or suburban cul- de-sac in Dana Point or Marina Del Rey, attract a group of skaters and observers for a few hours, and then, disappear.

Skate Wave is a representation of “The Wave” to scale, using exactly the same materials and processes. It will appear in the parking lot adjacent to the gallery throughout the duration of the exhibition. Like the original, it can be broken down into two parts, loaded into the back of a full size pickup truck, and transported to different locations.

that continue Barrie’s experiments with processes that combine aspects of drawing and performance. Working from archival photographs, Barrie reconstructs one of the massive concrete pipes used for the Central Arizona Project (CAP) – the largest water works project of its kind ever undertaken. The sections of concrete pipeline were so enormous (22 feet in diameter), they had to be cast out in the open desert, where they could cure and be buried on site. While these pipes were above ground, they became temporary meccas for skateboarders who would travel from all over the region, skirting security fences and possible arrest, to experience the sheer verticality these concrete giants had to offer.

Kelly Barrie (b.1973, London, England) received an MFA from California Institute of the Arts, New Hall, California and completed the Whitney Museum Independent Study Program. Barrie’s work, a material hybrid of photography and drawing, recreates forgotten historical events, by literally walking them out of his head through a performative floor drawing using his feet, dark room utensils and white photo luminescent pigment powder on black seamless paper. The light sensitive drawing is then documented in small sections using a 35mm camera, digitally collaged back together, and outputted to scale as one seamless photographic print. In spring of 2010 his works were featured in A Word Like Tomorrow Wears Things Out, at Sikkema Jenkins & Co, NY and reviewed in the March edition of The New Yorker. In winter 2010 Barrie completed a solo exhibition at LAXART entitled Negative Capability, which was reviewed by Sharon Mizota in the Los Angeles Times. Catherine Taft also heralded this exhibition in Saatchi Online magazine as one of the top 10 shows in Los Angeles. Barrie completed his first solo Museum project, Mirror House, in the fall of 2011 for the Santa Monica Museum of Art, which was reviewed in the Los Angeles Times by Leah Ollman, as well as featured in the September edition of Art Practical, Berkeley, CA. In 2011 Mirror House was acquired by the Albright Knox Gallery in Buffalo, NY, and included in their new acquisitions exhibition Surveyor curated by Heather Pesanti. Barrie’s photo-drawings have also been included in the 2008 California Biennial; as well as exhibited internationally in Arte Portugal 2010 and the 2008 Biennale of Sydney Revolutions – Forms That Turn.