Venice director Caskey Ebeling has received the 2012 Slamdance Audience Award for her first feature documentary “Getting Up: The TEMPT ONE Story“. The film was executive produced by her husband Mick Ebeling of The Ebeling Group, also located in Venice.

The documentary features Los Angeles graffiti artist, social activist and publisher Tony ‘TEMPT’ Quan, who despite being diagnosed with ALS in 2003 and gradually slipping into near total paralysis is now able to use modern technology to communicate and create art using his eyes. 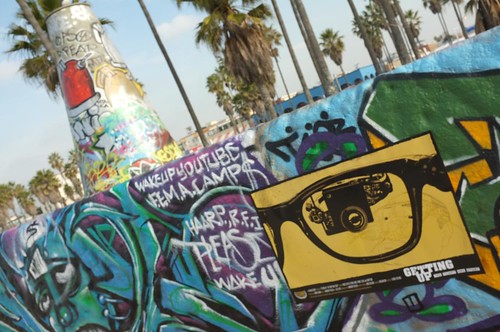 “Getting Up” “is the documentation of how Mick Ebeling, through his Not Impossible Foundation, along with a motley crew of international collaborators, changed TEMPT’s reality by inventing (here in Venice Beach) the EyeWriter, a low-cost, open-source DIY device (one of Time Magazine’s top 50 inventions of 2010) that allows ALS sufferers to control a computer with the only thing they can move: their eyes.”

Co.CREATE has a moving and informative piece on TEMPT, the filmakers and the documentary which can be read by clicking here. Check out the TED talk video “Mick Ebeling: The invention that unlocked a locked-in artist” by clicking here.

Congrats to all who participated on the film, and thanks for helping to change the world for the better!

(Thanks to Matt W. for the heads up on this!)