From the Venice Neighborhood Council:

The Venice Neighborhood Council’s Neighborhood Committee will hear from the City and residents about newly posted rules that close Ocean Front Walk from 12am to 5am. The meeting will be held Monday, January 23rd. The OFW discussion begin at approximately 8:00PM. 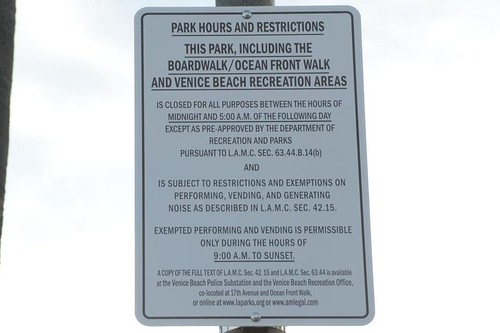 The LAPD announced last week that the Venice Beach Park will be CLOSED from 12am to 5am and that people in the park after closing will be warned / ticketed / arrested. They also announced that Ocean Front Walk will be considered to be a part of the park – so it will also be closed between 12am and 5am.

Enforcement of these regulations will begin in a few weeks, after signs informing the public of the regulations are posted.

According to LAPD, these are not “new” regulations; they have been on the books for several years but have not been enforced due to court decisions. LA’s City Attorney decided the regulations were enforceable after City Council District 11 received complaints about late night loitering / camping / partying in the park and on OFW.

The LAPD will discuss how they will enforce the rules and their impact on residents at the meeting. City Council District 11 representatives will review the complaints they received and the City Attorney’s decision.

The committee meeting begins at 7PM – click here for more information and the complete agenda.