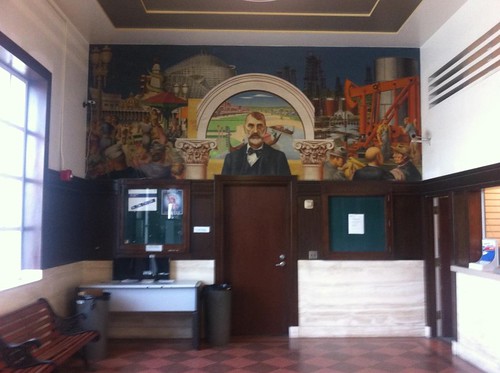 The appeal claims that the Postal Service failed to follow its own rules for the closure and seeks to have the Commission revoke the closure.

The dramatic decrease in the extent of Post Office operations, simultaneous with its “relocation,” means that the action is the functional equivalent of a closure – or at least a partial closure – and thus is subject to the right of an appeal to the Postal Regulatory Commission.

John Henning, the Stakeholders’ attorney, notes in a letter to David E. Williams, the Vice President of Postal Network Operations, that federal law requires the Postal Service to “comply with local planning and zoning requirements and building codes.”

However, the USPS has already announced it will soon issue a contract for approximately $400,000 to install a customer service facility in the Annex. This is before it has submitted any plans to the City of Los Angeles to review compliance with LA planning and zoning codes, in particular compliance with the current requirements for adequate employee, public and carrier truck parking, and parking lot setbacks, landscaping and re-striping. City rules will also require up-dating the facility to meet the Americans with Disabilities Act.

Henning suggests that Williams, in his recent denial letter stating that no appeals are permitted to his decision, is attempting to bully Venice residents into not appealing his earlier decision, when closures of main post offices are indeed appealable to the Postal Regulatory Commission.

Residents fear the loss of the historic structure and mural if it is sold, on one hand, and foresee increased parking congestion and a continuation of exceptionally poor maintenance of the grounds around the Annex, on the other, if customer operations move to the Annex.

“We fully understand the severe budget constraints facing the Postal Service,” said Mark Ryavec, president of the Venice Stakeholders. “But in downsizing, the Postal Service still has to follow its own rules – and they haven’t in this instance.”

“Representatives of the Postal Service have told us that they do not have to comply with local land-use laws, while a clear reading of the federal law shows this is incorrect,” Ryavec said. “It also shows they have been premature in deciding to relocate customer services before they have determined, in consultation with the Los Angeles City Planning Department, if the re-configuration of the Annex building and adjoining parking lot is legally permissible; for example, can they provide the required parking.”