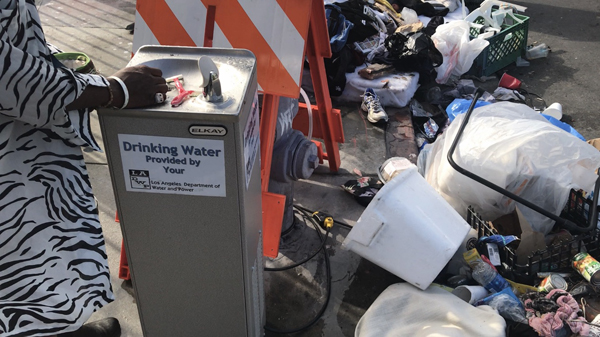 21 new water fountains have been installed throughout the City of Los Angeles near homeless encampments to provide clean drinking water during the hottest months of the year. According to a twitter post by Mayor Eric Garcetti, “20+ temporary water fountains are being installed all over the city to help people stay cool and hydrated in the summer heat. 6 of these fountains will remain permanently in place in Skid Row to ensure that homeless Angelenos have regular access to clean drinking water.”

One water fountain in particular, located on 3rd Avenue near Rose Avenue in Venice, is drawing scrutiny from locals. Some residents complain that the water fountain attracts more homeless to the neighborhood, who use the fountain for other things like bathing or cleaning razors. Locals have also shared photos of the trash that has accumulated around the drinking resident.

In an interview with NBC Los Angeles, Venice Beach resident Rick Swinger addressed the new water fountain. “What it does is it creates a camping environment, makes it easy for everybody to come here,” said Swinger. “We have world travelers now that are camping here for the free camping because it’s by the beach.”

However, according to Lorenzo, who lives on the street with his two dogs, the water fountain is much needed. “We don’t have money to buy water. It helps a lot,” Lorenzo said in an interview with NBC Los Angeles. The installment of the new water fountains comes on the heels of a growing homeless crisis crippling the city.