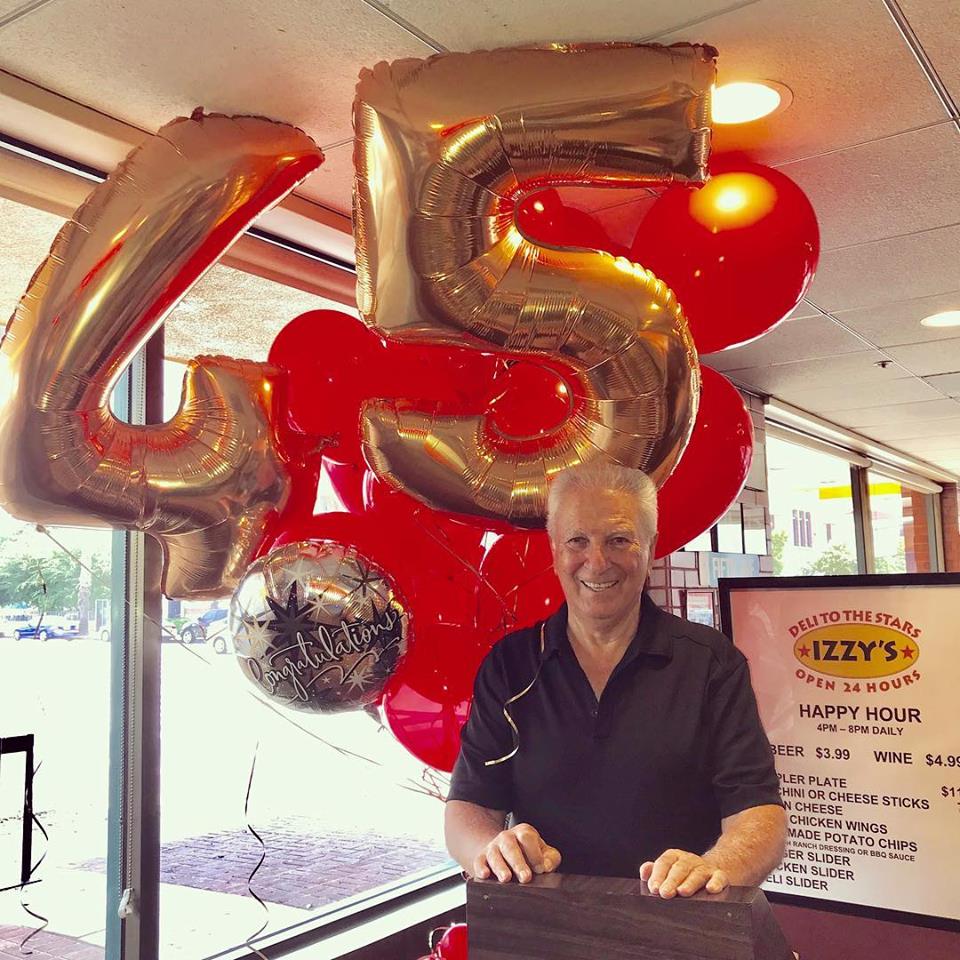 Izzy still has the original IZZY’S DELI menu from 1973, when the restaurant opened. 45 years later, while a pastrami sandwich may no longer cost $1.70, and the name has changed from“Kenny’s” to “Izzy’s,” not much else has changed at this iconic Santa Monica restaurant on the corner of Wilshire Boulevard and 15th Street.

“Our food is prepared by the same family of chefs since 1973,” said owner Izzy Freeman.

In addition to serving top-notch, overstuffed “New York style” pastrami sandwiches 24/7, one constant at Izzy’s Deli is Izzy Freeman, who can be found most days greeting the customers and making sure that every item is the highest quality and served perfectly. Izzy, known as “The Deli Lama”  was born and raised in Brooklyn and moved with his family to Los Angeles in 1953.

“The big sandwiches, the pickles, the smells and tastes, they were part of my childhood,” Izzy said. “I dreamt that one day I would own a deli.”

Izzy opened the Deli in 1973 with Kenny Horowitz. At the time, Izzy owned two IHOPS in Los Angeles and the intent was for Kenny to run the Deli and Izzy to run the IHOPS. “I helped him open the deli on Monday morning and I never left,” Izzy said.

Izzy’s was the first major deli in Santa Monica in many years, and from the start, it was a success. Customers were waiting in line for overstuffed corned beef and pastrami sandwiches, matzo ball soup, freshly roasted turkeys and of course the best New York style rye bread. In the decades since, the popularity of the Deli has only increased, being featured multiple times on Larry David’s “Curb Your Enthusiasm” and winning numerous awards including “Best Designed Restaurant” to “Best All Night Restaurant.”

In August, Izzy’s celebrated its 45th Anniversary and while much has changed in Santa Monica over the years, walking into Izzy’s is like stepping into a delicious-smelling time capsule. A number of the waiters and waitresses have been working at the Deli since the day they opened and several second-generation family members are also working at Izzy’s.

“There are some good restaurants in Santa Monica but they come and go and so does the staff. At Izzy’s, everybody knows the customers. Some people come in here every single day,” Izzy said.

Celebrities from all walks of life have come into Izzy’s to enjoy breakfast, lunch, dinner or dessert, with their photos donning the deli’s walls on Izzy’s Celebrity Wall of Fame.

“45 years is an accomplishment,” Izzy said. “After 45 years, my customers and employees are like family.”

To find out more about Izzy’s Deli, visit their website at izzysdeli.com, call (310) 394-1131 or just walk in, say hello and grab a delicious meal. They are located at 1433 Wilshire Boulevard in Santa Monica.