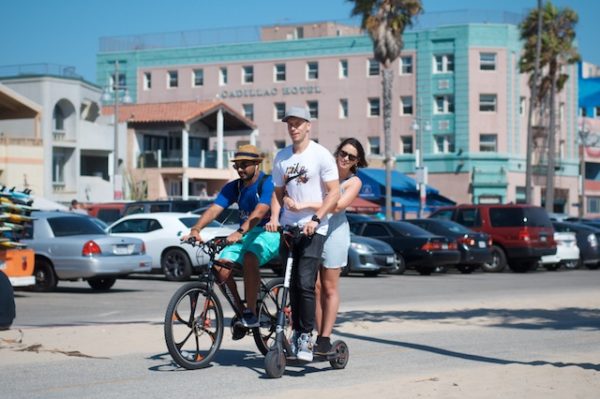 Cyclists who take the Venice Beach bike path on their morning commute will need to find an alternative route, or leave for work really early.

As of September 10, from 7:00 a.m. to 3:30 p.m. Monday through Saturday, the Marvin Braude Bike Path through the Venice Beach area will be closed for safety improvements. The work is expected to finish on October 20. These improvements, which are being carried out by the Los Angeles Department of Public Works (LADPW), include the installation of new signs and pavement markings intended to increase awareness of pedestrian crossings and guide pedestrians onto Ocean Front Walk and bicyclists onto the Bike Path.

The section of the path closed during these improvements is between Marine Street in Santa Monica to Washington Boulevard. LADPW has worked with the City of Los Angeles to use Main Street and Pacific Avenue as a detour route.

LADPW intended on completing the improvements before the summer but issues developing a detour plan delayed the work. Not wanting to close the path during the summer, LADPW decided to wait until the fall to start the process.

“Obviously, the goal was to get this done before the summer but the Department just wasn’t ready and there was no detour in place before the summer so we will be implementing the changes in September,” said Stephanie Cohen West/Metro LA District Director for Los Angeles County Supervisor Sheila Kuhl at the August Venice Neighborhood Council meeting.

Cohen said that the Main Street and Pacific Avenue detour will allow cyclists from both the north and south to travel through Venice, but acknowledged that this route may not fully address riders’ safety concerns. While Main Street has a designated bike lane, Pacific Avenue does not. In October of 2017, 40-year-old Damon Shear was hit and killed by a car on Pacific Ave while crossing the street.

“We do understand that this does not address ALL safety concerns on the path and we will continue to explore options for additional safety enhancements as funding is identified,” Cohen wrote.

For any questions about the closure or the detour route, contact Stephanie Cohen at (310) 231-1170 or by emailing scohen@bos.lacounty.gov.