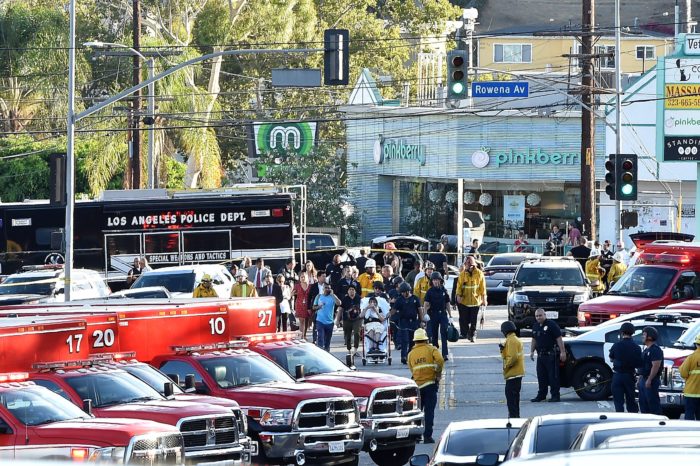 “I am truly sorry,” Moore said early today. “It is unimaginable the pain of the Corado family. We share the pain today.”

He explained that Corado was exiting the store as suspect Gene Evin Atkins was entering the store when LAPD gunfire hit her.

The widely-covered incident began when the suspect allegedly shot his grandmother and kidnapped his 17-year-old (ex-)girlfriend. He fled in a car while firing shots out the back window toward pursuing officers, Moore said.

Atkins then ran into Silver Lake Trader Joe’s, where a three-hour standoff followed, closing down the area.

“As Atkins exited his vehicle, witnesses reported they observed Atkins to shoot at the officers. The officers exited their vehicle and returned fire as Atkins ran towards the entrance of Trader Joe’s,” Moore said. “I’m sorry to report that we’ve now determined through our forensic investigation that one of the officers’ rounds struck Miss Corado as she was exiting the market and was in close proximity to Atkins. Miss Corado ran back inside the store and collapsed behind the manager’s desk.”

Moore said that the LAPD will wait until after the investigation is over before deciding what consequences the two officers responsible for the shooting will face, but his remarks seem to suggest that he believes their actions were justified given the circumstances.

“We remain heartbroken over the tragic death of Melyda Corado and the trauma our crew members and customers have suffered,” the store wrote. “Mely was a valued and beloved crew member. Our sole focus remains on supporting her family and those involved in Saturday’s horrible ordeal in Silver Lake. Out of respect for them, we will not be providing further comment on today’s developments.”

Corado’s brother Albert, who lives in Minneapolis and was unable to reach his sister after hearing about the stand-off, mourned his sister’s death on Twitter.

“I’m sad to say she didn’t make it. My baby sister. My world. I appreciate the retweets and the love. Please respect my family’s privacy as we are still coming to terms with this,” he wrote.

Atkins, 28, faces 31 charges that include one count each of murder, fleeing a pursuing peace officer’s motor vehicle while driving recklessly, discharge of a firearm with gross negligence, grand theft of an automobile, driving or taking a vehicle without consent and assault with a firearm and shooting at an occupied motor vehicle. Los Angeles County Superior Judge Gustavo Sztraicher has ordered Atkins be held on $18.75 million bail.