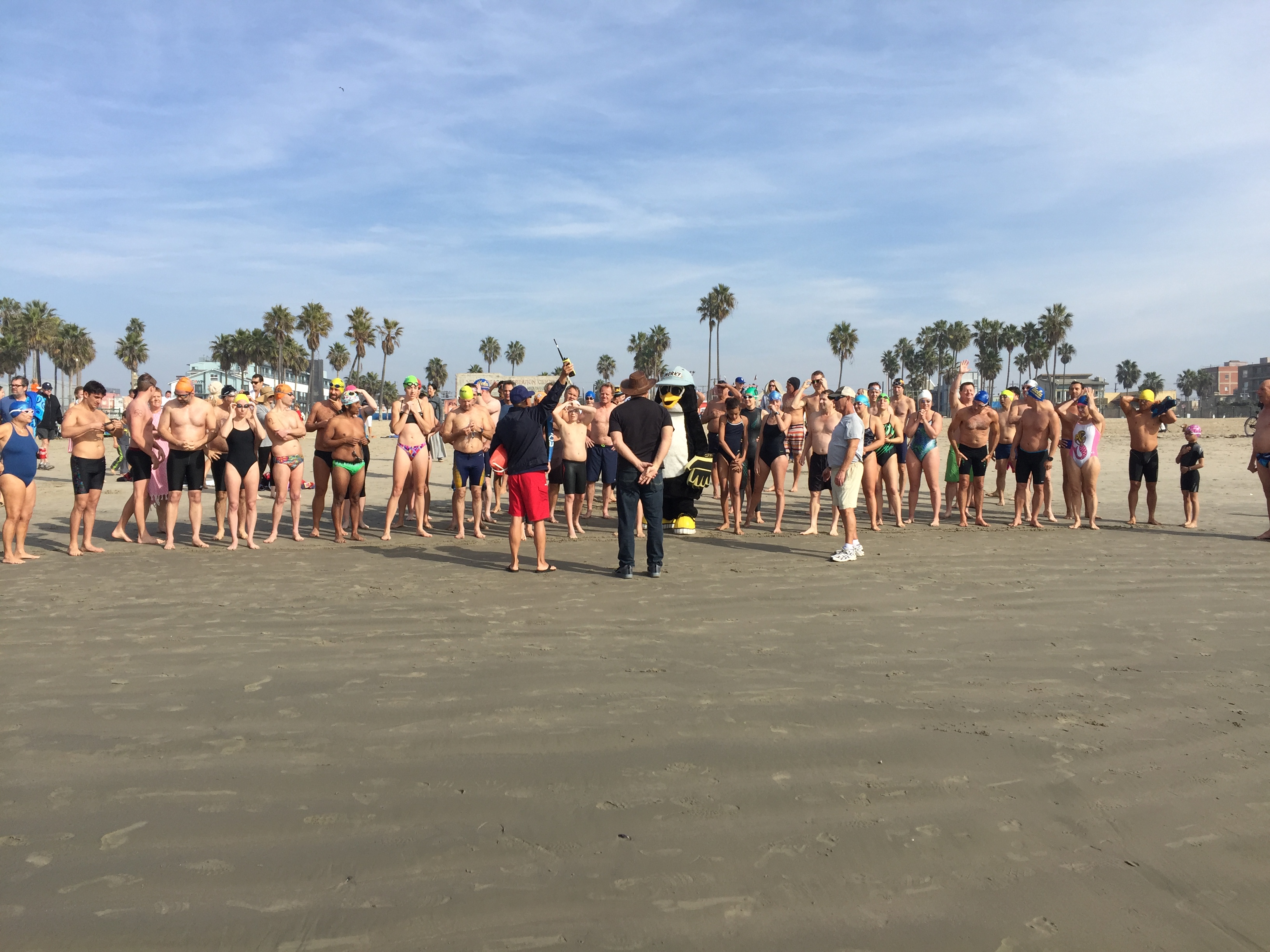 January 1, 2018. Noon on Venice Beach. 63° outside and a little chillier in the water. The rest of the country would say we were cheating, but for sunny Southern Californians, the temperatures were frosty enough for a fresh start to the New Year.

It is a decades-old tradition. The Penguin Swim has hundreds kick start the new year with a splash at the Venice Breakwater, on the beach at the end of Windward Avenue.

Southern California Aquatics (SCAQ) run the event every year. SCAQ Founder, Clay Evans, told Yo! Venice, “I swam it for ten years, then I help run it for ten years, and after some of the founders passed away I inherited this thing, and we’ve been keeping it going for ten more years.”

The event has a long history, particularly so for the Van Patten family, who are now celebrating three generations of Penguin swimmers. The family tradition started in 1973. Jimmy Van Patten told Yo! Venice for his father, actor Dick Van Patten, the swim was his lucky charm. “He’d say, ‘let’s do it for good luck’ and it’s become such a big thing for the whole family.”

Swimmers choose between two courses. One is a fun dip of 50-yards and the other, for those up for a challenge, is a 400-yard swimming race. Wetsuits are a no, no according to race OG Jane Delynn. “It’s considered bad form to wear wetsuits,” she told Yo! Venice, with a chuckle. “It’s just exhilarating. The first day of the year,” she added.

Van Patten said he remembers a time Farrah Fawcett used to join the swim. “Big stars used to come down,” he said.

By far the biggest star at this year’s Penguin Swim was 8-year-old Lilysa. The youngest to take on the 400-yard race, she said while the water was cold and dark the swim wasn’t too hard because she swam the distance twice a week during swimming training. However, Evans said the longer race is grueling, with water temperatures hovering around 57°, “when you’re in the water it just saps the energy right outta ya.”

Whether in it for a serious swim or a simple splash, the event has an emotional pull for many. “I think it’s like a renewal, a rebirth. Letting go of last year and then going into the new year feeling cleansed,” said Venice local Sasha Gary.

For Van Patten’s nephew Duke, the swim is a family tradition he never misses. “No matter how crappy you feel it’s something that brings everyone together,” he told Yo! Venice.