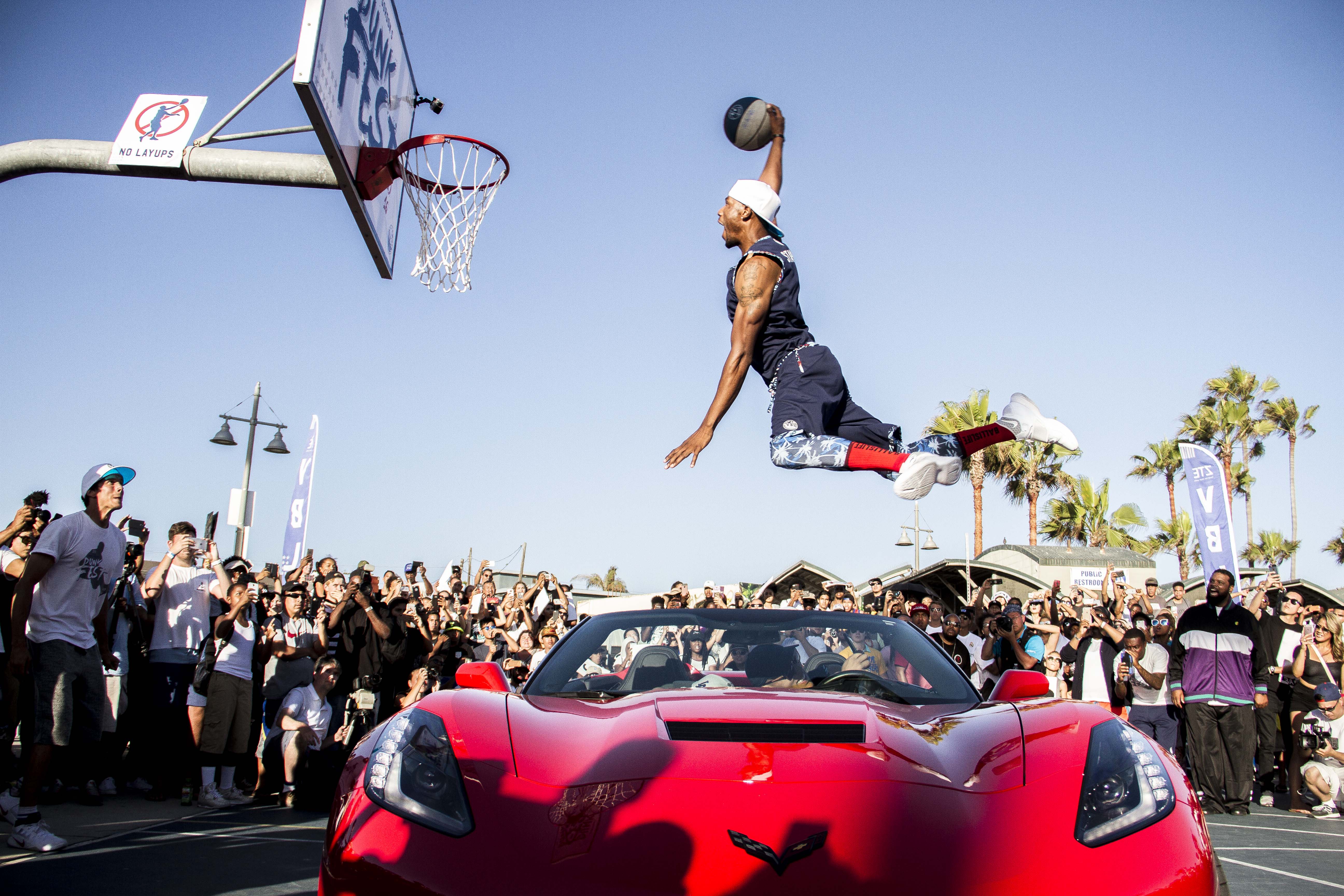 A family tradition of destructive dunking is coming to the beach this July. Larry Nance Sr. was a three-time NBA All-Star and winner of the NBA’s first Slam Dunk Contest in 1984. Nowadays his son, Larry Jr., displays the Nance family talent on a nightly basis for the Los Angeles Lakers. With the NBA season ending a while back, Nance’s throwdowns are over for now, unless you make it out to the 2017 Venice Basketball League (“VBL”) Dunkfest, happening Saturday, July 15 on newly redesigned the Venice Beach basketball courts.

The competition will feature some of the best dunkers on the planet, like professional dunker, ex-Harlem Globetrotter, and Slamma Jamma leading man Chris Staples. For most of the mortal world, attempting to jump over a car would likely lead to a serious limp the next day. But for Staples, it’s just another move in his arsenal of Adventures into the Stratosphere. His skills have gained him notoriety and dunk contest invitations around the world, most recently to the FIBA 3×3 World Cup Dunk Contest in France.

Despite the growing fame and whispered choruses of “oh-no-he-didn’t” surrounding Staples, there’s one contest close to home that he elevates above the rest – Venice’s own VBL DunkFest.

“That was the biggest crowd I’ve ever seen on one court or at a dunk contest, and I’ve been to a lot of them,” Staples said before suiting up to play in Venice Basketball League’s weekly action. “I don’t think anything compares to that.”

Last year’s competition was sponsored by fellow high-flier and 2016 NBA Dunk Contest runner-up Aaron Gordon of the Orlando Magic. Undoubtedly the highlight of the event was Staples’ slam over a C7 Corvette Stingray occupied by none other than Gordon himself.

“That was the second time I’ve ever jumped over a car. But man, it was tough because that car is so wide,” said Staples, recalling the dunk that now lives on in YouTube and Instagram glory.

And what does Staples have planned for the 2017 VBL DunkFest, taking place Saturday, July 15 on Venice Beach’s newly resurfaced court? For now, it remains under wraps, but don’t get to thinking Staples is taking it easy after last year.

“I love Venice. I love the atmosphere, so it’s going to be something special this year. I want to do something to make the crowd get on their feet.”

Gordon won’t be attending this year’s contest, but the event still promises to draw NBA star power, including NBA Champion Metta World Peace and current Los Angeles Lakers swingman and savage dunker Larry Nance, Jr. As this contest is not televised, the only way to soak up the action is to witness in person – so make your way to Venice Beach on Saturday, July 15 to see Staples, Nance, and some of the world’s greatest dunkers put on a show. The Venice Basketball Courts are at 1800 Ocean Front Walk, Venice Beach.