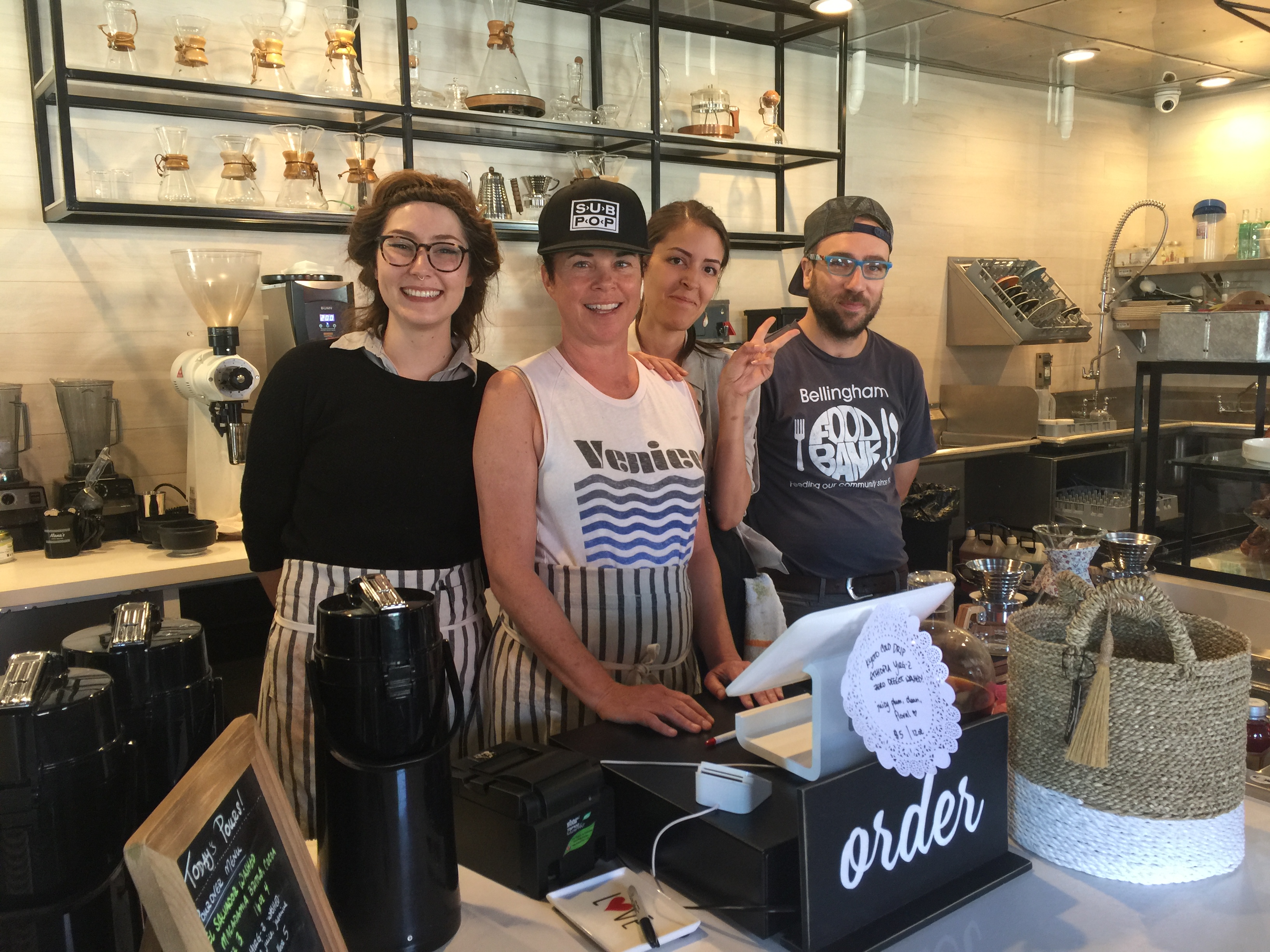 When he was just three years old,  Eric Stogsdill visited Canton Kitchen in Mar Vista with his parents.“The first Chinese food I ever ate, when I was three, was here in this building,” he said of the space at 12511 Venice Boulevard that is now a hip new coffee shop.

On Saturday, May 20th, Eric and his business partner, Erin Ward, celebrated the opening of Alana’s Coffee Roasters. The two Dogtown locals marveled at the series of coincidences that led to something far bigger than Stogsdill could ever have dreamed of when he started roasting coffee in a popcorn popper out the back of the house he was renting off Ward.

“A little before 2009 I started roasting coffee. I saw people roasting peanuts at farmer’s markets, and I thought maybe I could start selling coffee,” Stogsdill told Yo! Venice. For nearly ten years Stogsdill worked the farmer’s market circuit building a cult following. Roasting happened on the low-down. Stogsdill was worried Ward, his landlord, would kick him out if she discovered his backyard business.

Instead, when she did fid out what was going on, she wanted to team up. In the process of winding down her production company, Ward was looking for her next business adventure and getting Stogsdill roasting in a commercial-sized machine became her next project.

Both Ward and Stogsdill are adamant Alana’s honors it’s local roots. “We grew up around the corner from one another when we were kids,” Stogsdill told Yo! Venice. Although, neither had any idea of this until much later in life. Born in Santa Monica, Stogsdill spent his youth riding his skateboard in Venice, before there was the Skate Park.“My Mum worked at the bowling alley for probably 25 years back when it was called Peter D’s Galley,” Stogsdill said of what is now Bowlero Mar Vista, just down the road from Alana’s.

It took two years for the Westside locals to develop their cafe and roasting space. The bright orange Deitrich Roaster gets fired up a couple of times a week so as to deliver the freshest coffee possible. Roasting in small batches allows Stogsdill to bring out the best in the bean. Anyone buying beans or stopping in for a coffee can expect peak flavor.

Alana’s is named after Eric’s 11-year-old although he came across a slight dilemma when his 7-year-old Ava was born. To circumnavigate sibling rivalry, Stogsdill named many of the beans and roasts in Ava’s honor including Ava y el Ruiseñor. The name was a collaboration between Stogsdill and producer Anny Pimentel, who grows the coffee beans on her farm, Finca Loma La Gloria, in El Salvador. “She loves birds, and I said I needed to name something after Ava, so she came up with Ava the Nightingale,” said Stogsdill.

One of the only shops on the Westside to use a Slayer espresso machine, Alana’s serves a sweeter shot of espresso with maximum viscosity. The flow rate is manually controlled during a pre-infusion stage, and this allows for a finer grind size and versatility of flavor profiling.

Try it for yourself!

Alana’s serve coffee, pastries, and sell bags of their house roasted coffee beans in Mar Vista at 12511 Venice Boulevard. There’s ample parking and with free wifi, Alana’s might just be the hottest new place to work from home.