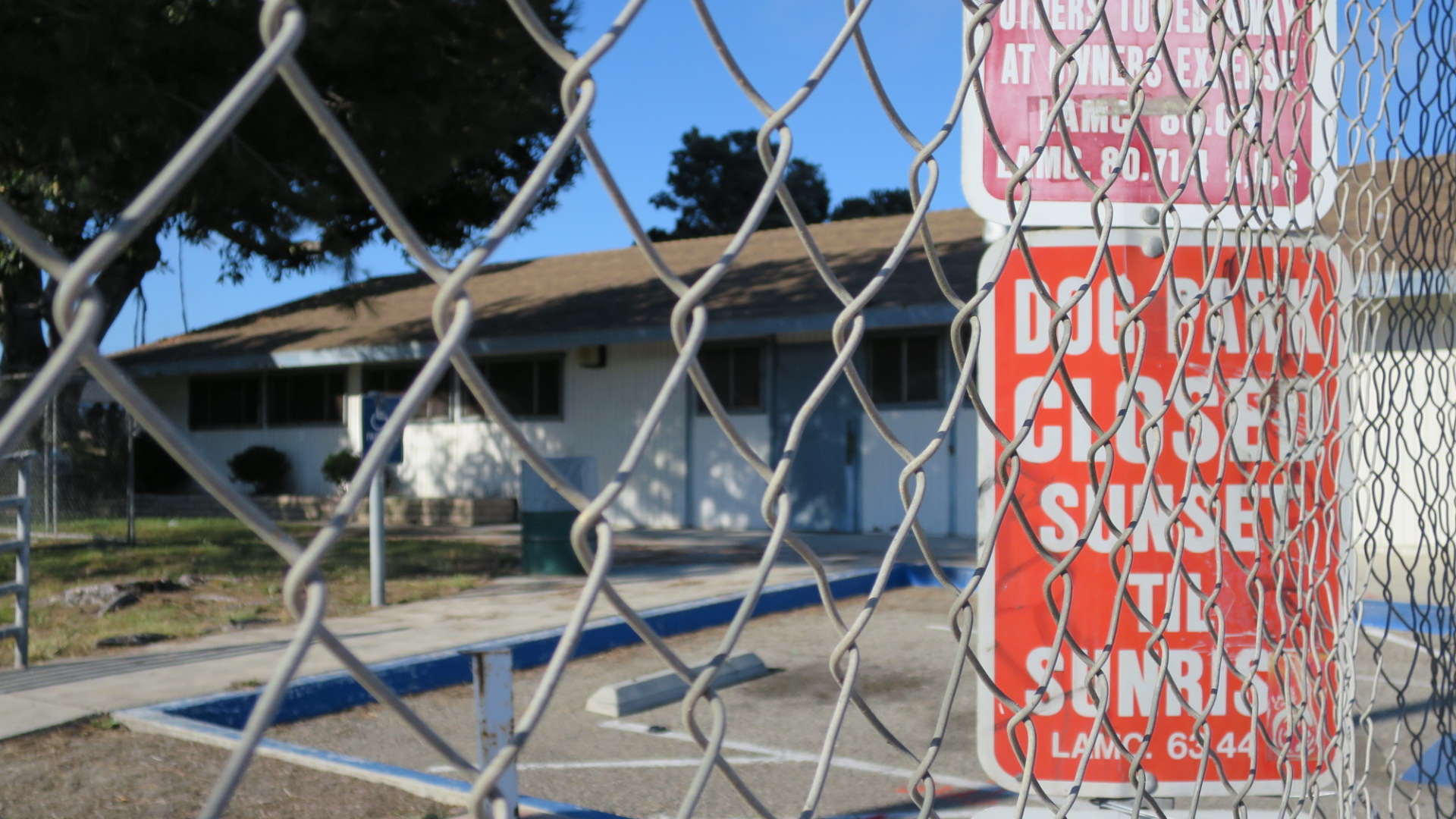 The old Westminster Seniors Center at 1234 Pacific Ave., in Venice will become a storage facility to help the Venice homeless community. The announcement caused uproar in the auditorium at Westminster Elementary School. Yes, there was a smattering of applause and a few cheers but these were drowned out by a thunder of boos.

Close to 300 had crammed into the school hall at 1010 Abbot Kinney Blvd on September 9. At the back and along the sides it was standing room only. Councilmember Mike Bonin had called the community meeting to provide updates and get feedback on the 18-point plan he introduced 6 months ago to reduce homelessness in Venice.

While it was only one small element of the overall plan, where the community stood on the issue of the Westminster storage facility was the hottest topic of the night.

In the aftermath many left the meeting feeling hopeless. The deal was done and the decision to turn the old senior center by the Westminster Dog Park into a storage facility was going ahead. Even though so many in the community had objected.

However, Bonin made it clear. This is a temporary measure. Even agreeing the location, across the road from Westminster Elementary, was not ideal saying “we need a better alternative.”

So what can Venice do about it?

“Turning ideas into action is never easy and it’s harder on an issue as complex and multi-faceted as homelessness. Any and every proposed solution is and will be controversial, and historically, that has stopped progress in its tracks. But look at the streets and sidewalks of Venice we cannot afford inaction. In the face of this crisis, inaction is much worse than controversy,” Bonin told Yo! Venice.

One might speculate that at this point, finding another city owned property in Venice to use for storage would be doomed to a similar fate. Surely neighbors with homes near any other suggested location would object. So far, the most popular suggestion to solve the problem is an idea to introduce mobile storage.

In a nutshell,the idea is to convert old school buses into storage. These mobile units would drive around Venice 8-hours a day stopping off at dedicated pickup/drop-off locations. The plan is comprehensive and includes social service workers traveling on the buses, amongst other things.

David Graham-Caso is the Communications Director & Environmental Policy Advisor for Bonin’s office, he tells Yo! Venice that, “Mike has said since he first announced his proposals to prevent and reduce homelessness in Venice that he would be willing to look at any alternatives to using the former Westminster Senior Center as a storage facility” and  that Bonin said repeatedly at the September 8 meeting that he was “committed to taking a serious look at the mobile storage proposal.”

So all is not lost for those who feel they didn’t win the battle against the Westminster Storage facility. However, there’s a time crunch. Winter is coming and until an alternative solution can be put into action it looks like Venice might need to accept Westminster storage as a stopgap.

Graham-Cast says the mobile storage idea still has a lot to work out, “including where the buses would come from, how much they would cost and how they would be retrofitted, where the busses would stop and how they would return a person’s belongings if they needed them while the bus was en route somewhere else, how the other services would be offered, how security would be provided at drop off/pick up spots, and other issues. None of these obstacles should be insurmountable, but there are obviously a lot of unanswered questions that need to be studied.”

As that study is happening, Graham-Caso  says “we are moving forward with a temporary, pilot storage facility at the former senior center because it is very important that storage is online by November when the Winter Shelter opens so that the lack of storage is not a disincentive for people using the shelter.”

Although there has recently been a sanitation sweep through the homeless encampments around Rose and 4th and Rose and 3rd avenues in Venice, the homeless and their piles of belongings are once again beginning to swell.

One lady, Heather, sits guarding her belongings. Nearby her husband is cleaning engine parts. “I dropped out of school and I can’t read or write but I know how to use this,” he says tapping his head. The two want to open a homeless shelter one day. For now now though, their main priority is guarding their belongings and staying alive. “I sleep with one eye open, and this…” says Heather’s husband, holding up a heavy wrench.

Across the road two women scream at each other. “What’s she saying now?” says Heather, explaining the two women are mentally ill. One of them makes her way over. She wears a t-shirt and the threadbare sarong she has tied around her waste does a poor job covering her naked lower half. She’s agitated and is holding what looks like a rim off a car. It has been hacked up so the she can easily hold it in her small hand.  It’s edges are sharp and jagged. It is a threatening weapon. Heather remains calm. “You want some clothes?” Heather hasn’t much but she’s willing to hand over a pair of pants to another who has even less. The woman calms down and smiles, grateful for the help.

When asked about the Westminster storage facility Heather looks skeptical, “how much is it going to cost?” He eyes light up when she hears it’s free. She’s excited to hear Chrysalis and the Los Angeles Homeless Services Authority will run the facility and provide services to those who use it.

“It’s cool that cops bring some of the resources to us but the only thing is, individuals like us kind of get scared of the police,” she says, explaining that some won’t hang around when the police come and therefore miss opportunities to get help.

Of the Westminster storage she says, “it’s great. It’s in one spot and if their belongings are there of course they’re going to go there and then they’ll have the opportunity to get help they need…I think it’s amazing…I think it will give them the boost that they need. They’ll do one thing and then they’ll start doing something else to improve their life.”

Heather says she feels tied to her belonging. She says if she were to leave them unguarded she runs the risk someone will come “crib-shopping.” That is, “drug addicts stealing other people’s stuff to make money. They won’t have that opportunity if that homeless storage facility is open.”

One worry neighbors have is they’ve heard Chrysalis will only provide security for inside the building not outside which might mean people will loiter outside the building all day.  To address these types of concerns Bonin has invited neighbors to a to a community meeting next Thursday evening, September 15, from 6pm – 8pm at Westminster Elementary School.

Graham-Caso tells Yo! Venice the meeting is “so neighbors can meet directly with Chrysalis and LAHSA to discuss the operations for the storage facility, such as hours of operation and ingress/egress points that would make the facility a better fit in the community.”

Heather believes having a place to store belongings could be the first step towards getting off the street for many. “I think most of the people here, and I can’t speak for them but I can say my opinion, I think some of them want to not be homeless anymore and they’re trying to change it but it’s hard. It’s really difficult to change your life with the snap of a finger.”

Proving just how hard it is finding a way off the street is evident, Heather is four months pregnant. She’s a priority case but she has no idea where to turn.

For now the pilot facility is planned as a short-term solution to clear Venice streets of homeless belongings. What ever is decided for the long-term, one thing that was made clear at the September 9 meeting was; wherever the storage facility is, it has to be in Venice.

During question time, where each person who wanted to speak was given 2 minutes, vacant land close to Dockweiler Beach was suggested as a possible location for a storage facility by one man. His concern was that providing storage for homeless in Venice would crowd the neighborhood. The room shook with cheers and applause at the idea of moving planned storage facilities out of Venice.

“That helps that community, not this community,” said Bonin pointing out that those homeless in Venice would not travel to Dockweiler to store their belongings. He also added that those responsible for Dockwieler would never approve a plan to store another community’s homeless belongings.

Explaining the need for Venice to provide storage Bonin said it stemmed from the federal government prohibiting the city of Los Angeles from clearing sidewalks until working solutions like storage facilities are put into place. Many booed and called Bonin a liar. However, there are a number of cases where the city is currently unable to enforce certain laws until certain requirements related to improving the current homeless crisis have been met.

Bonin said that the federal government threatened to pull federal dollars from California until housing and services for the homeless has been provided. Reminding the room that the Westminster storage facility is “not a permanent solution” Bonin challenged Venice to step up and provide a better option.

Former Venice Land Use and Planning Committee (LUPC) member Todd Darling said to the crowd doing his 2 minutes that there is “not a single place in LA that hasn’t a homeless problem”  telling neighbors that Venice “can’t export this problem.”

Whether it’s the encampments of the Ballona Wetlands, or in the Valley off Burbank Blvd, to the street camps in Los Angeles Pico-Union where the gutters stink like a park toilet. The homeless crisis is city-wide.

Speaking with Yo! Venice Bonin said, “There is plenty of evidence that there are workable solutions to homelessness.” Explaining the solution would require “…focused, targeted strategies for different populations; neighborhood support for solutions; public support for funding; and cooperation from all levels of government, not just the city.”

At the September 9 meeting, another man used his 2 minutes to thank the system. A veteran, he had been a homeless. He  explained that, while it hadn’t been an easy ride, the permanent supportive housing he found through St Joseph’s and Venice Community Housing had helped him overcome his addiction. He said the biggest “problem with homelessness is hopelessness.”

As Bonin addressed the crowd he said, “it’s easy to think that homelessness will never be solved…but there is a solution.”

But the greatest challenge yet is keeping hope alive, on all sides.

Julian Miles Mayers-Johnson, 33, of Venice sentenced to 13 years in federal prison By Chad Winthrop A Venice man has...

By Tom Elias, Columnist Attention spans were already short 42 years ago and they have become far shorter since, especially in...

The scene of a double shooting in Venice over the weekend. Photo: Citizen App.
Featured, News