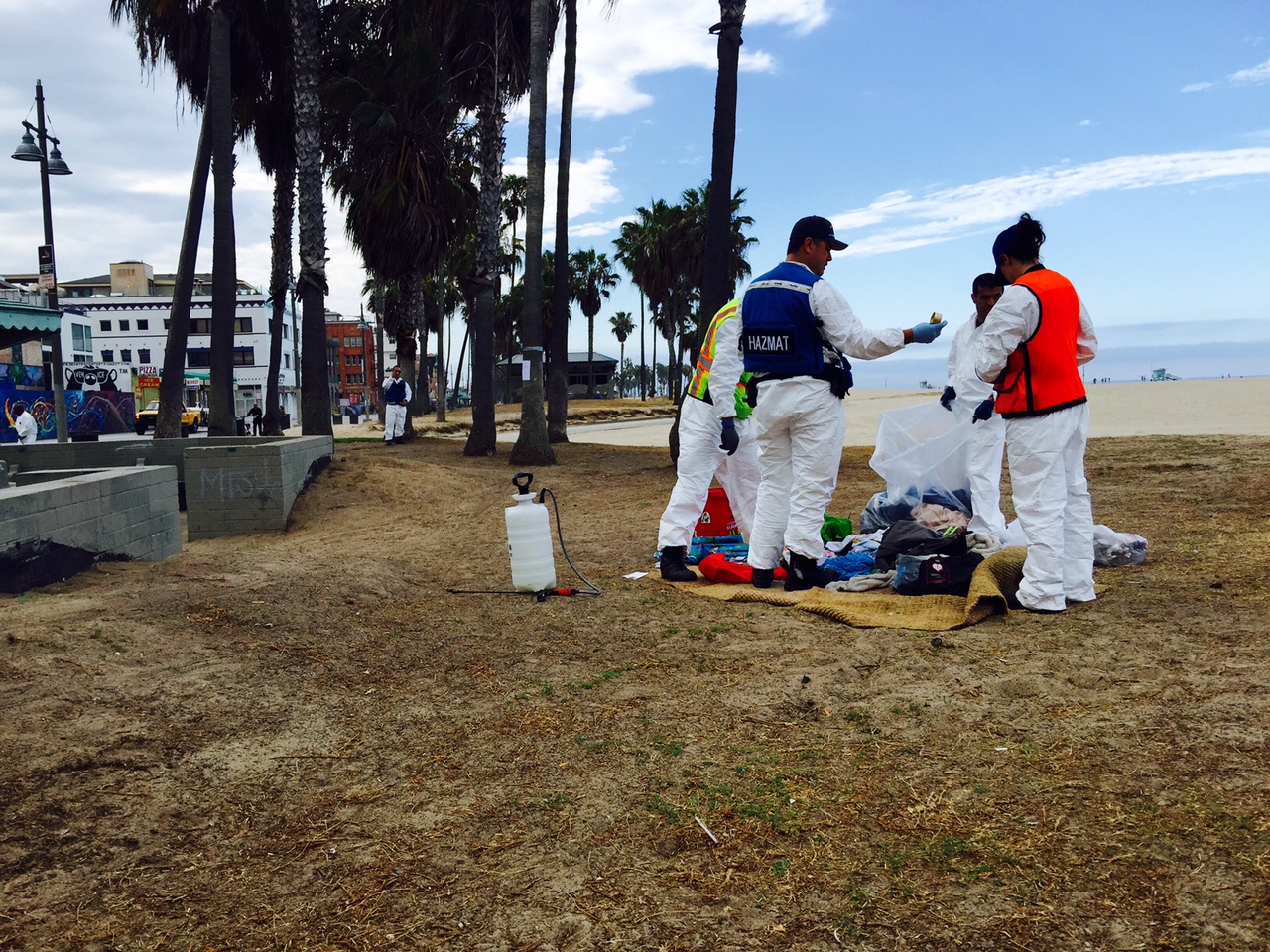 The Los Angeles City Council will consider whether
to give final approval today to revisions on a law prohibiting the storage of property in public areas such as sidewalks, so that transients would still be able to hold onto 60 gallons worth of belongings, at least for now.

The council voted 13-1 last week to sign off on amendments to 56.11, a city law that prohibits tents and other living space to be set up between 6 a.m. and 9 p.m. and currently does not allow any storage of personal property in public areas.

Because the vote was not unanimous, the ordinance needed to return to the City Council for a second and final vote. The city has been under pressure to strengthen the law against legal challenges from advocates for the homeless, and also to address concerns raised by residents and members of the business community that there are too many homeless encampments.

Under the amendments, homeless individuals would be allowed to store a 60-gallon bin’s worth of belongings — including deconstructed tents, bedding, clothes, food, medicine, documents and other personal items — on the sidewalk as long as they are attended.

The city could still impound property that is left unattended and any
property that is in excess of the 60 gallons, under the revised ordinance. The provisions also allow city officials to reduce the amount of belongings allowed if they can establish that there is alternative storage available nearby and are able to get the City Council’s approval to do so.

Despite the changes, advocates for the homeless still say the law
essentially makes homelessness a crime and could hurt the city’s chances at federal dollars needed for services and housing for the homeless.

Los Angeles Homeless Services Authority officials last year urged the city to remove any aspects of the law that would criminalize homelessness, saying that failing to do so would jeopardize about $110 million in federal funding.

The City Council voted last November to amend the law, saying they had taken out portions that criminalize homelessness, but did not move until last week to approve the actual language of the amendments.

Earlier this month, the U.S. Department of Housing and Urban Development awarded the first chunk of the funding — $84.2 million — to the homeless services authority. With HUD still deciding whether to give the Los Angeles the remaining $24 million to $28 million, advocates for the homeless say the revisions still contains criminal penalties and provisions that would punish the homeless for being forced to live on the streets.

Under the revisions, it would be unlawful for homeless individuals and others to refuse to take down their encampments during the day or prevent a city employee from doing so. It would also be a misdemeanor if an individual delays, resists or obstructs a city employee from moving, removing, impounding or discarding personal property stored in a public area.

Councilman Gil Cedillo, who voted against the revisions, said there is no need to adopt such a measure because there are other laws to address the criminal activity, obstruction of accessibility in public areas and unsanitary conditions that some homeowners and business people associate with homeless encampments.

Councilman Mike Bonin said he was not completely happy with the
ordinance, but considered it an improvement over the one now on the books, which only allows homeless individuals to keep as many belongings as they can carry.

Shayla Myers, an attorney with the Legal Aid Foundation of Los Angeles, told City News Service last week that the city has had a history of being sued over laws like 56.11. “The policies and practices of seizing homeless peoples’ property has led to significant litigation” dating back to the 1980s, Myers said.

She did not say if the Legal Aid Foundation is planning to take legal
action against the revised 56.11, but noted there are “significant legal issues” with it. She pointed to an ongoing lawsuit filed by the Legal Aid Foundation and other attorneys on March 14 that alleges the city continues to improperly seize and destroy the belongings of the homeless and to falsely arrest them.

“What we have seen and the basis of (this lawsuit) is that the LAPD and the Bureau of Sanitation are seizing and summarily destroying peoples’ property when it is taken,” Myers said.

City attorneys said earlier this month the amendments are aimed at
giving the city a way to keep sidewalks clear and accessible while allowing homeless individuals to keep some belongings if there are no other places to store them.

Assistant City Attorney Valerie Flores told the Homelessness and Poverty Committee that the 60-gallon provision was included in the hope of striking “the right balance,” but added that “this is sort of uncharted territory” in terms of whether the courts would accept it. She said the provision is an improvement over the existing law, which “did not allow anything a person couldn’t carry.”

“We do believe this is a lawful ordinance and a court would appreciate the dueling interests that we’re trying to serve and hopefully uphold the ordinance,” Flores said.

Attorneys with the Legal Aid Foundation of Los Angeles submitted a
letter to the council earlier this month voicing concerns that even with the amendments, the ordinance remains unconstitutional and would continue to criminalize homelessness.

“The adoption of the proposed ordinance and the inevitable enforcement creates significant sanctions against homeless people and gives unprecedented authority to city employees and contractors to seize and destroy homeless individuals’ property,” the attorneys wrote. “In doing so, it violates the United States Constitution.” They added that the proposed ordinance fails to take away criminal penalties, and keeps “significant elements that criminalize homelessness.”

Attorneys also said in the letter — which was also sent to Los Angeles Homeless Services Authority Executive Director Peter Lynn and HUD Secretary Julian Castro — that the proposed ordinance could cost the Los Angeles area the remaining $24 million in HUD grants being sought by the city and county’s joint homelessness services authority “at a time when the city and county can scarcely afford to lose a single dollar in federal funding for the homeless.”