Concurrent with their “Kienholz Before LACMA” exhibition on the first floor galleries, the L.A. Louver Gallery will host an opening reception for “Tom Wudl: Works from 1971-1979″ on Tuesday, January 24th from 6-8pm. 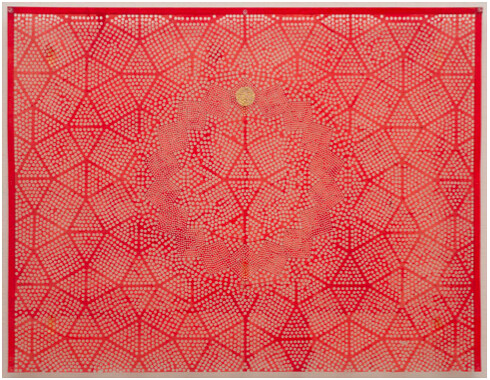 L.A. Louver is pleased to present an exhibition of work from the groundbreaking decade of Tom Wudl’s career: the 1970s. Tom Wudl: Works from 1971-1979 includes ten paintings, of which the seminal Verde, 1972, has been generously loaned by the Museum of Contemporary Art, Los Angeles.

Wudl created his abstractions with handmade rice paper, which he pierced with innumerable punches of varying size, forming patterns with the perforations. Incorporating acrylic paint and gold leaf, and the occasional use of found newsprint (such as in Untitled, 1973), striking, sumptuous colors and geometric shapes are the hallmarks of these works. Motifs allude to the mystical and spiritual, as well as the natural world, and compositions are enigmatic. Most paintings are untitled, with a rare exception in the aforementioned Verde, from the Spanish (the artist’s first language) meaning verdant or green, and perhaps a reference to Wudl’s own artistic coming of age. Also, Homage to Buckminster Fuller, 1973-1975, is distinguished by patterning inspired by the work of the renowned system theorist and designer of the geodesic dome, and whose ideas were a primary influence on Wudl in this early stage of his career.

With the dawn of the 1970s, Wudl aimed to reconcile his interest in figuration with the doctrine of abstraction, by pursuing a course deliberately antithetical to the reductive Modernist theories of artists such as Donald Judd and Robert Morris. While Wudl’s work from this period has been frequently identified with the “Pattern and Decoration” or “P&D” movement active on both U.S. coasts from the mid-1970s to the early 1980s, the genesis of Wudl’s paintings predated the movement by more than five years. Considered by some observers to be a reaction to Minimalism (although in common with Minimalism it retained a flattening grid), “P&D” sought to obliterate the distinction between art and decoration. Abstraction is its form, beauty is implicit, and ornament is an end in itself. The philosopher and writer Arthur Danto has argued that this decoration was situated “somewhere between figuration and abstraction and encompassed almost the entire visual culture of many non-western traditions.” Furthermore, the movement itself was an early step into a globalist aesthetic. New York Times art critic Holland Cotter has described it as the first and only art movement of the postmodern era. Indeed, while Wudl did not formally embrace the movement, his work certainly embodies its theoretical underpinnings: it is non-referential, non-hierarchical, lacks irony, and is deeply aware of the universe of cultures beyond a Euro-American horizon.

*****
In 1958, Tom Wudl immigrated to the United States from Cochabamba, Bolivia. Aged ten, Wudl already knew he wanted to become an artist. Immediately following high school, he enrolled at Chouinard Art Institute, which gave him both a classical training in art, and the freedom to hone his drawing skills. Wudl also immersed himself in art history, developing a passion for late Medieval art (especially Northern European) and early Italian Renaissance painting through private study and while traveling in Europe.
Wudl has combined making art with a long career in teaching, and has held positions at Art Center College of Art & Design, UCLA, UC Santa Barbara, UC Irvine, Claremont College and Otis College of Art and Design. He has exhibited his work in museums and galleries in the United States, Europe and Asia, including the 1972 Documenta V, Kassel; Sezon Museum of Art, Tokyo; Nagoya City Museum; The Whitney Museum of American Art, New York; San Francisco Museum of Art; Pasadena Art Museum and the Los Angeles County Museum of Art.

L.A. Louver has represented Tom Wudl since 1980. Tom Wudl: Works from 1971-1979 tells the story of Wudl’s art that immediately preceded our involvement, and presaged the success of ten solo gallery exhibitions we have presented over the past two decades.