On Friday, Nov 11th from 6-10pm, C.A.V.E. Gallery will host an artists reception for their new show “Dress To Impress”. “Dress To Impress” is a collaborative series by L Croskey & Tony Venegas. Jason Hernandez, Jasmine Worth, Megz Majewski and Young Chun will be featured in the Main Gallery. 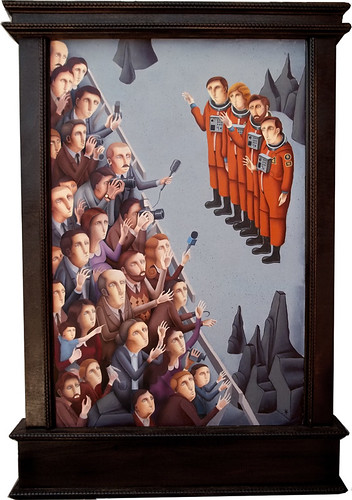 As always, there will be a DJ and neighbors are encouraged to attend! It is free! The show will be on view through December 3rd.

Jason’s most recent body of work demonstrates his fascination with mankind and the world of theoretical physics. I believe man has always been a curious creature. That curiosity has lead man to the farthest & darkest corners of the earth. We’ve made Earth our home and in it, we’ve shared our philosophies and sciences. We’ve become a race of dreamers, thinkers and worshipers. In doing so we’ve made are tiny mark in a vast Universe. Still, I can’t help but wonder if Earth will forever remain the dwelling place for mankind.

In a world where scientific breakthroughs have reached outcomes of possible transcendental levels, its not absurd to assume that the future of mankind may in fact expand as far as the outer reaches of space. Whether or not man will be driven to outer space by mother natures fury, our own faults, or simply to test our own potential, its clear to me that space will truly be man’s last frontier. My latest body of work is an arrangement of drawings and paintings that narrate a whimsical story of what it might be like for the first pioneering astronauts who utilize the technologies behind modern physics to travel great distances throughout an immeasurable universe.

Jasmine Worth creates scenes from fairytales gone awry, swirling seamlessly between the sweet and surreal, inevitably dipping into the valley of the morbid.

Jasmine studied formally at Watts Atelier in Encinitas, California, as well as Studio 2nd Street in Encinitas, CA, and earned her BFA from the Laguna College of Art and Design. While she possesses the credentials, the product of her toils clearly pours from the cobwebbed corners of her mind, not the classroom. Her paintings—a cabaret of rich hues—are a blend of soft textures and colorful characters, juxtaposed against gloomy themes.

Created in her home of San Diego, Jasmine combines dark influences and subtle-yet- serious undertones with raw artistic talent and a rarely seen creativity. Her work exudes a strong bearing of individuality, manifested through characters that speak almost vocally and give a new element of depth to an otherwise two dimensional medium. Each scene tells a story, and every story is as diverse in emotion as it is in appearance.

Megz Majewski’s “Cute n Creepy” style depicts a bizarre underworld of the dead – inhabited by zombie-like vixens, forgotten pets and other sweet but formerly living things. With subjects that can be placed in the realm of Victor Van Dort and Beatleguese, her characters express specific emotions of their experiences in this gloomy underworld.

Megz got her start painting murals in her hometown of Cranbrook, Canada and soon after moved to Vancouver to attend Vancouver film school. She has since established a successful career as a Computer Graphics Animator. “Spook”, Majewski’s student film, has gone to many festivals including Annecy and was used as the music video for Tunng’s song ‘Fair Doreen’.

She has worked in all areas of CG from films including IRobot, television series such as Battlestar Galactica, to cartoons like Viva Pinata.

“My art is a fabrication of reality – the way I see it in my mind. Music, culture, childhood memories, and the people in the environment that surrounds me influence it. When I pass by strangers or a situation taking place, my mind begins to create stories about them – imagining their lives, the triumphs, the tragedies, and the happiness or sadness they experience – which becomes the inspiration for my artwork. But, there is truth in my art. It comes from the way I am feeling at the time I am constructing a painting, and it is the feeling I am trying to convey.”

Born a minister’s son in 1977 in Seoul Korea, Young Chun remembers as a child, living in a small attachment to a hillside church for a brief time. The weekdays spent running around with imaginary friends in the dim empty chapel has fueled his imagination, contributing to his artistic growth. The “chapel” has become a permanent fixture in his creative mind – where he constructs, develops, and stores works in progress, before they ever meet a sketchpad.

In 2000, Young received his B.F.A, from the Art Center College of Design, in Pasadena California. After several years of painting without clear direction, he stumbled into the opposite end of the spectrum – into the healthcare field- to search for “substance” and “something deeper in life”. The years spent working in hospitals in the LA area, faced with life and death situations; has expanded his outlook in life, adding to his artistic vision.

In February of 2011, Young quit his career as a respiratory therapist, to pursue a life as a full time artist. He currently lives and works in Orange County, California.